Just a few hours and 25 years ago while night time turned to daylight from November 9 to November 10, 1989, the Berlin Wall fell peacefully. A divided nation was free and celebrated some of the finest hours in Germany’s history.

Time travels fast and many are too young to remember, but others will never forget the vivid exuberance and joy expressed by Berliners from East and West, and by millions of people around the world, as thousands came together at The Wall. Those first hours, almost impossible to describe now, were — to our amazement — peaceful. They were filled with tears of relief, joy, and hope that spoke volumes about the fears, trepidation, and longing for the freedom of a people living in separated parts of the same country. 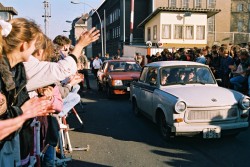 Many of you may remember the eventful days of November 1989 and the time leading up to it, beginning with the protests which started in Dresden and Leipzig — the Monday Demonstrations. They spread to Berlin and to many other East German cities. Then, surprisingly and wonderfully, they were followed by the exuberant day that finally saw the fall of The Wall and the turbulent yet exhilarating weeks afterwards. Germany’s joy was echoed around the world as people watched live on television. I am sure many of you still recall where you were when you first heard The Wall was finally gone after 28 years, two months, and almost 28 days.

When I heard the news on the eve of November 9 of The Wall’s final moments, I was in a training camp in Kienbaum, just 20 Kilometers to the east of Berlin. As a medical student, I was preparing for the next day’s physics exam. I had the radio on low volume and listened to the news alerts — there was something about an upcoming important press conference. 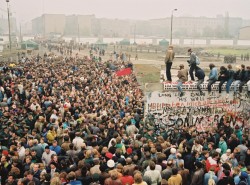 Thousands enjoyed their new freedom in the morning of November 10. © Bundesarchiv/Heiko Specht

Later, together with many of my countrymen, I learned that Günter Schabowski, a member of the “Politbüro” of the East German government, had given us East Germans the gift of a new travel rule — starting immediately, we could get permission for private travel to the West without special bureaucratic approval. Not really believing what I thought I heard, I turned off the radio and attempted to go back to studying.

‘Can this be true?’ I wondered. I couldn’t wait to get up and head straight for Berlin the next morning. The physics department of the medical school of the Humboldt University was located in the Invalidenstraße, just a few hundred meters away from one of the border checkpoints into West Berlin, not too far from ‘Checkpoint Charlie.’ When I arrived in town, I watched countless people streaming from the East towards the West!

When I met my professor, he told me my fellow students had already left to go to The Wall. Our exam would take place, of course — but in a few more weeks. Today there were more important things to do, he said — it was to be a day of celebration! We sat down and talked about the exciting events of the past evening. About the possibilities. About the future. 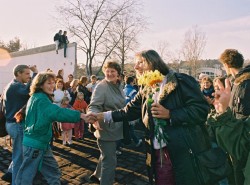 People from East and West embrace each other. © Bundesarchiv/Klaus Lehnartz

These are fond and happy memories. The weeks after The Wall came down went by so quickly and so differently for each and every person. While many people enjoyed traveling freely for the first time and others reconnected with families long separated by The Wall, many of my fellow runners enjoyed new trails into freedom.

It was not just the running trails in the beautiful forests around Berlin that were suddenly accessible to us all, but also some great new races. As early as November 12, some East German runners participated in the traditional West Berliner cross country event.

The Brandenburg Gate was opened shortly before Christmas, so on the morning of January 1, 1990, Berliners from East and West joined with runners from all over the world and ran in the New Year’s Run that was able to be routed for the first time through the Brandenburg Gate. The distance of the “race” was 6K and no times were recorded. It was a memorable and peaceful demonstration of running into freedom. 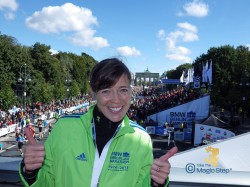 “Thumbs Up” for the 40th anniversary of the Berlin Marathon in 2013. © Take The Magic Step

Months later, at the end of September 1990 — just a few days before the German people celebrated their day of the Reunification — 25.000 runners participated in the Reunification Marathon in Berlin. I will never forget the feeling running through the Brandenburg Gate, and winning the race as a former East German. So much went through my mind. There were pictures of pain and sadness dissolving into joy and freedom… Sure, part of the concrete wall was still visible, but it didn’t deter us since the spirit of the runners was filled with happiness. To us and to the tens of thousands of spectators who lined the streets, it was a dramatic symbol that say of how far Germany and the world had come.

This past month I enjoyed yet another heartfelt trip home to my hometown where I was able to see many extraordinary sporting events over the years such as the Track and Field World Championships and the annual Berlin Marathon, held every September, with its homestretch through the Brandenburg Gate. Of course, I visited the inner city again with my family and friends, and followed part of the path of the Berlin Wall. Most of it can’t be recognized but you feel it when you are walking the streets of both parts of the city — freely — across borders that once were so demoralizing and forbidding. It felt like the city was in a hurry to suppress and submerge the time of The Wall and wanted to create the new Berlin so quickly. 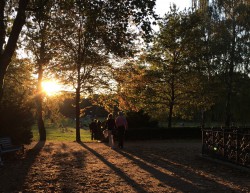 The Tiergarten in Berlin. © Take The Magic Step

But come and look for yourself. Visit the pulsating and young boroughs of Berlin with their outgoing, energetic, and wonderful people. Imagine the inspiration created by President John F. Kennedy when he famously announced in 1963, in front of the Town Hall in Schöneberg, “Ich bin ein Berliner.” — movingly expressing America’s solidarity with the people of Berlin.

Experience the transformation of the city since Kennedy’s moment of history and the fall of The Wall. You can see that change and feel the joy of freedom when you visit the new museums, and enjoy the ubiquitous cafes and the many fantastic attractions.

And while we look ahead and go on with our lives, many of us still, especially during this anniversary celebration, remember the lives of others — of those people who fought and protested openly for freedom and some were punished for it. Although we may remember those unsettling events now, we eventually will allow them to be all replaced with some form of forgiveness. 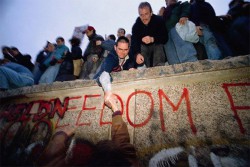 Many of us lived differently in those days, weeks, and months after The Wall came down. Some were deeply relieved; some were saddened by the loss of a loved one — and so many others were just happy to see each other again after years of being apart. To those among us who still struggle to make sense out of the confusion of those years and the challenges of the Reunification, we would like to give our care and support, and our helping hands.

During my last visit to Berlin, while I was running on one of my favorite trails in the forest east of town, in my thoughts I thanked all the wonderful people who made this peaceful Reunification possible: the quiet ones, the vociferous ones, the politicians, and those who actually broke down The Wall chunk by dusty chunk. But most of all my thoughts went to the people of the Monday Demonstrations who gave birth to it all by softly and potently pronouncing, “We are one nation = Wir sind ein Volk!” 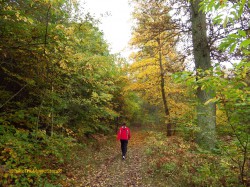 …on one of my favorite trails close to Berlin. © Take The Magic Step

On behalf of the entire Take The Magic Step® team, I am sending you heartfelt wishes for many inspiring runs in freedom!

Run with peace, run with joy, and always on happy trails!