Running the Marathon of Freedom

As I run through peaceful mountain trails in Colorado, my thoughts are with my grieving friends and fellow runners in Boston.  For me, growing up behind the Iron Curtain in East Germany, the Boston Marathon was always a Marathon of Freedom, held in a far-off country I could only dream of, where I knew people were free to speak their minds and live their lives.  Then the Berlin Wall came down and in 1990, I finally and exuberantly stood on the starting line in Hopkinton to begin my own personal freedom run.

In these days, I remember that magical time and I experience a profound feeling of strength that counters the confusion and disbelief of witnessing the wicked violence of the terrorist attack in Boston.

This cynical and sinister act of aggression against a peaceful and good-hearted people—runners, friends and spectators—happened during a 26.2-mile race renowned for friendship and camaraderie, and which, by its special nature, normally offers up the most inspirational stories of endurance and courage.

Instead, we were witnesses to unfolding stories of stunning heroism as doctors, nurses, other medical personnel, law enforcement officers, additional First Responders, runners, and spectators rushed into potential danger to help the injured.  We watched marathoners lifting up fallen fellow runners and spectators carrying friends to safety even as the threat of more destruction loomed.

A terrorist’s cruelty did deprive us of our freedom to run on that afternoon.  But only for a moment in time, because we all united and rushed forth to help our fellow citizens, defying danger to stand up for our hard-fought principles of freedom.  Rather than being weakened, we gained strength from this act of terror.  We stood united and vowed to not have our freedoms compromised. 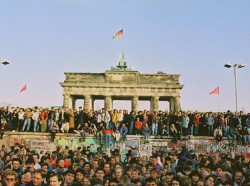 The fall of the Berlin Wall in November 1989. © Bundesarchiv/Klaus Lehnartz

As I grew into adulthood in East Germany, I longed for the liberty that others enjoyed.  And I found this in Boston—a truly charitable and sports-loving community.  On this past Patriots Day, that great city greeted runners from 92 countries with open arms. Participants from dozens of different cultures and religions came together, united in their love for the sport of marathoning, under the flags of freedom and competition.

No one could guess our freedom would be so vulnerable again.  What began in Boston as a nascent struggle for liberty continues as our ongoing labor of care to keep living free and in peace despite those who would deny it.  We likely will experience more senseless acts of violence but, so far, we have never let them define us and we never will.  The glory of the human spirit prevails.

Long ago, we began an ongoing marathon of a different nature—a marathon of freedom, one we all can pursue.  After April 15th, we feel an even deeper appreciation for what we, as Americans, have and what we accomplish each day—the ability to live our lives as we choose.  And this is a marathon we should do with our partners from other countries around the world.

People today are looking forward to running together.  And with each step, we can be inspired by the stories of heroism we witnessed.  Fearless and united, we will gain strength because we know that good ultimately will overcome.  The people of Berlin demonstrated this almost a quarter century before the devastation in Boston when they tore down the Berlin Wall.

In the end, freedom should and shall win.

Uta Pippig (@utapippig) has run the Boston Marathon seven times and won it three consecutive times.  She is the President of www.TakeTheMagicStep.com, which promotes health, fitness, and lifestyle changes.