Berlin and the Running Bear Win Hearts at the World Championships

There were winners everywhere in Berlin—and not just the athletes who made the headlines at the 12th World Track and Field Championships.

The warmth, camaraderie and spirit of friendship that took over my home city for nine wonderful days made me so happy, and will never be forgotten by those of us lucky enough to be there. Heroic feats on the track and roads were matched by the enthusiasm and joy of the knowledgeable spectators who filled the majestic and historic Olympic Stadium or stood for hours lining the marathon and racewalk courses to cheer on the more than 1,800 competitors. 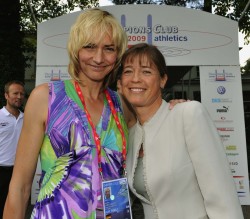 The key events were covered day-by-day by the Take The Magic Step® team. But I have vivid memories of two scenes that occurred after races were over and epitomized the spirit of the Championships. The first followed the epic battle between the USA’s Bernard Lagat and world record holder Kenenisa Bekele of Ethiopia in the 5,000 meters. Lagat moved to the front in the final straight—but the great Bekele came back to edge him at the line and win in 13:17:09 minutes. Movingly, Lagat embraced the victor in a sporting gesture of admiration and friendship. Later that day we watched the Australian team finish third to the USA in the men’s 4 x 400m relay. No sore losers here, either! The Aussies—so obviously thrilled to have won the Bronze Medal—immediately reached out to share their joy with the Americans and together on the track the two teams celebrated and posed for photographs.

The organizers wisely included a significant role for Berlin’s historic Brandenburg Gate, completed in 1791 yet a modern-day symbol of freedom since the fall of the Berlin Wall. Intriguingly, for the first time ever in these Championships, the marathons did not start and end in the stadium, but under the famous monument. As the marathoners ran four 10-kilometer loops, they crossed from what was once East Berlin to West Berlin four times! And, in a brilliant move, the organizers allowed 8,000 runners to share the experience. An hour after the men’s race ended, they took to the street to enjoy the thrill of running the scenic 10K loop that the best marathoners in the world had just completed. 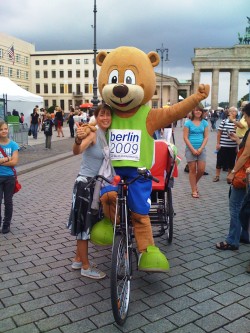 In my greeting on the eve of the event, I hailed Berlino, the Berlin Bear mascot of the championships. He proved to be an inspired choice! Berlino quickly won the hearts of the spectators as he bear-hugged a late arrival at the finish line in the women’s 10,000 meters … posed with the great Usain Bolt after the Jamaican had earned his second Gold Medal and set his second world record in the 200 meters … and even ran in lane eight to briefly match, stride for stride, the great Kenyan runners in the men’s 10,000m.

Perhaps the truest spirit of the Championships was demonstrated in their final moments. As the Closing Ceremony ended, the announcer called for all the volunteers who’d helped make this epic event possible. Men and women poured out of the tunnel in their thousands, eventually filling the entire track. The crowd rose in a standing ovation that seemed like it would go on forever—and then the athletes came out to join the volunteers, mixing and chatting and spilling onto the infield. It was truly a magical moment.

Thank you, Berlin—the biggest winner of all!