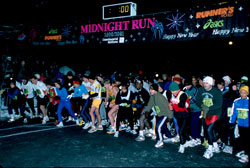 There are various ways of bidding farewell to the old year. New Year’s Eve runs can be the sporty alternative which is practiced all over the world. No matter if in Stockholm or Vienna, Sydney or Alaska—everywhere in the world people are running on December 31 albeit for different reasons. Those who have been training the whole year and have competed in races might regard the New Year’s Eve run as an athletic farewell. For others it might provide the opportunity to reconcile with the fading year in which one had hoped to exercise more. Others just enjoy the relaxed and happy atmosphere which usually can be found at New Year’s Eve runs. At some places lucky charms are traditionally handed out. In Lägerdorf, a little town in Northern Germany, for example, they hand out fossil “Thunder Wedges,” i.e. fossilized octopus tails which have lived in the regional chalkstone ponds 50 million years ago.

From São Paulo to Madrid … to New York City

The best-known New Year’s Eve run in the world is celebrated in São Paulo. Not only is it one of the oldest but certainly it is the hottest and the loudest. In about 30 degrees Celsius (86º Fahrenheit) about 12,000 participants run the 15 kilometers through the Brazil metropolis while they are being wildly cheered on in a carnival-like atmosphere. The Brazilians owe this tradition to the popular sports journalist, Casper Libero, who imported this idea from France. There he had experienced a midnight race in which the runners had been carrying torches. In 1925 he carried out the event for the first time in his home country with about 70 runners and it soon became a tradition. Many of the best long-distance runners—from Emil Zatopek to Kenneth Norris, from Martin Hyman to Paul Tergat—have thrown themselves into the fierce drumming and the tropical temperatures along the Avenida Paulista.

The São Paulo of Europe can be found in South Tyrol. In the late afternoon of December 31, Olympians and World and European champions meet in the capital city of Bolzano to chase each other through the narrow alleyways of the old part of this alpine city. The prestigious 10K race has been considered to be the most competitive of the New Year’s Eve races because of the caliber of the runners it attracts.

For years the biggest New Year’s Eve run has been taking place in Madrid. About 18,000 runners have been coming to the Spanish capital to participate at the San Silvestre Vallecana. Apart from its sheer popularity, the 10K run is also high on the list for various top athletes. In 2007, for example, Eliud Kipchoge from Kenya ran a new world-best time in 26:54 minutes.

The New Year’s Eve run in New York is considered to be a spectacle. Each year, one hour before midnight the Emerald Nuts Midnight Run starts in Central Park. The four-mile race is not so much popular from an athletic point of view but more for its exciting choreography of music and fireworks which accompany the runners. At the finish they are welcomed by a huge clock counting down the last minutes of the year.

The biggest German run features about 5,000 participants from countries as far away as Canada, Malta, England, Ireland, Austria and Switzerland. The New Year’s Eve run from Werl to Soest in the western region of Germany, features a celebratory drink at the end of the 15-kilometer run. For years, the race has supported charity projects from its revenues and donations. This year the race hopes to raise more than 40,000 Euros ($55,000US).

A unique event is the New Year’s Eve run on the Egyptian peninsula of Sinai where distances from 5K up to the marathon distance are being run beneath the 2,586m high Moses mountain.

The chance to start the New Year with a year’s best time is given in Switzerland. The ZB Cricher New Year’s Marathon is started at midnight and whoever crosses the finish line first, can call himself the current year’s fastest runner. Even without this ambition, however, this run is a unique event with its running in the darkness of the night.

No matter where you run on December 31, New Year’s Eve runs are a special experience and a great opportunity to finish the current year actively. It does not even have to be an official New Year’s Eve run—just meet for a fun run with friends or go for a run on your own. It is a joyful farewell from the old year as well as a positive outlook into the new one. 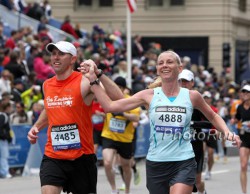 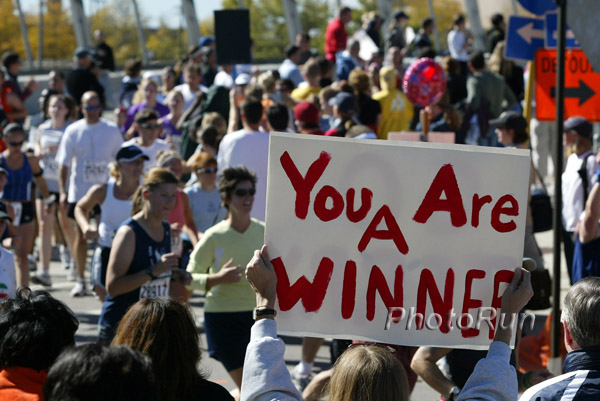 Keeping A Cool Focus: Just A Few More Days Until Your Marathon Celebration