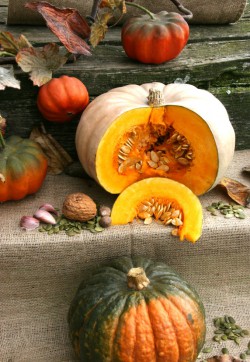 In homes all over the country, kids of all ages are enjoying turning pumpkins into scary-faces. Halloween’s mystery surrounds us as lighted pumpkin features gleam from yards and windows, and little monsters, pirates, princesses, witches, and ghosts prepare to go from house to house, knocking on our doors and threatening us with a trick if they do not get the desired treats.

But pumpkins and other winter squash are good for more than just decorating one of the fun and exciting events of the year. Rich in potassium, beta-carotene, and Vitamin C, they have several health-enhancing benefits. Even the seeds, which often do not get used during carving parties, are nutritional wonders. To paraphrase an old saying, at Halloween you can carve your pumpkin and eat it, too!

Halloween’s(1) history stretches back over 2,000 years. All Hallows’ Eve, as it is formally known, originated with the Celtic tribes of Northern France, Great Britain, and Ireland as a celebration of the end of summer and the beginning of the New Year. It is also known as Samhain. It marks the evening of All Saints’ Day (November 1), a holy day in the Roman Catholic and Anglican Churches.

Long ago, people believed on that night the frontiers between the living and the dead became indistinguishable, and the ghosts of the deceased came back to the world.

During the same time of year the Romans(1) celebrated Pomona, the goddess of the orchards, and Feralia, the celebration of the deceased. When the Romans came to Great Britain, some historians suggest, the traditions of Samhain, Pomona, and Feralia merged to become an early forerunner of what we now know as Halloween.

Our traditional carved pumpkins — also known as Jack-O’-Lanterns — owe their popularity to the legend of an Irishman named Jack(2). According to the story, he tricked the devil and made him promise not to claim him after his death. But after his passing, God did not let him into Heaven because of his actions! Unable to enter either Heaven or Hell, he was given a burning coal by the Devil to light his way as he went into the dark night. Jack placed the coal into a carved turnip—and this gave him light as he continued his lonely journey through eternity. For reasons of convenience, Irish settlers later replaced the turnip with a pumpkin.

Winter squash varieties have great nutritional potential. They belong to the plant family Cucurbitaceae. Squashes used for pies, muffins, breads, bagels, stews, cookies, and other dishes mainly belong to three plant species: Cucurbita pepo, Cucurbita maxima, and Cucurbita moschata. The following table offers you an overview of a few of their common varieties.

A diet rich in winter squash may provide several benefits for our health. Studies suggest that components in pumpkins for example could not only help improve blood glucose levels(3) but also may have antioxidative and cell-protective properties. Their flesh also is a good source of beta-carotene and vitamin C as well as potassium.

Now, have all these fascinating facts got you thinking about a snack? You may like to sample dried winter squash seeds. With their great nutty taste they are delicious as well as being a good source of vitamin K, magnesium, and iron.

Diets high in these seeds are associated with a lower risk of gastric, breast, lung, and colorectal cancer. Furthermore, pumpkin seed oil(4) may have anti-inflammatory effects and improve prostate, bladder, and cardiovascular health. Pumpkin seeds also can act as an anti-parasitic. Researchers have recommended further trials and studies to investigate all the mechanisms and effects of pumpkin flesh and seeds and the possible health benefits of pumpkin-rich foods in our diet.

As mentioned above, winter squashes are rich in beta-carotene, which is the plant precursor of vitamin A. One cup of cooked pumpkin, for example, can contain 5135μg (micrograms or mcg) of beta-carotene(6). The body can convert absorbed beta-carotene into vitamin A as necessary to help in satisfying our bodies’ daily requirements. The Recommended Dietary Allowances (RDA) for vitamin A range from 700 (women) to 900 (men) micrograms. Beta-carotene and vitamin A fulfill many functions in our bodies. Beta-carotene, for example, is an antioxidant and may have anti-carcinogenic effects. Vitamin A is vital for vision and the reproductive and immune system, as well as the health of tissues and bones.


Tips on Selecting and Storing Pumpkins

Winter squash is grown in many parts of the country. Finding locally grown fresh ones can be fairly easy — you may like to try farmer’s markets, orchards, or pumpkin patches. They should be heavy for their size and have a firm and dull rind. Preferably, the stem should still be attached as this will help to retain moisture. Please avoid squashes that are soft or moldy or have a damaged rind. Also, a softer rind can be a sign of an unripe, less tasty winter squash. To ensure they last as long as possible, it is best to store them whole in a cool place or cut them up into portion sizes for the freezer.

Fun Facts for Halloween: According to the US Census Bureau(7), which analyzed data from 2012, there are about 41.2 million potential 5- to 14-year-old trick-or-treaters—and the kids have at least 115 million potential front doors to knock at.

Americans consumed an amazing average of approximately 24.7 pounds of candy in 2010. It is fair to assume that a considerable portion of that was eaten during Halloween.

More than 1.1 billion pounds of pumpkins were produced in 2010 by major producers in the United States and it is a safe bet that a good number of them ended up as Jack-O’-Lanterns or the filling for delicious pies.

And finally… how do you measure the excitement of millions of kids who get to enjoy the one night of the year when they are actually encouraged to scare the grown-ups?