The Healthy World of Tomatoes 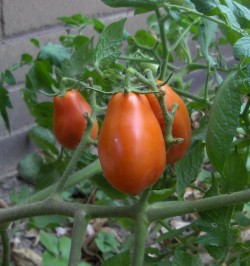 Whether eaten in a salad, on a sandwich, in sauces, or fresh from the vine, tomatoes are essential in anyone’s kitchen. In fact, in 2007 each American consumed an average of 68.6 pounds of processed tomatoes and 20.3 pounds of fresh tomatoes(1).

The origin(2) of this tasty and nutritious fruit is thought to be in the northwestern parts of South America. Wild tomato plants, which typically bear very small fruit, still flourish in some parts of Ecuador, Peru, and northern Chile. After the species found its way north to Central America and Mexico, 16th century Spanish explorers in those regions took samples with them back to Spain. Despite literally having their roots in neighboring South America, tomato plants were not introduced to the United States until planted by the colonists who arrived in the 18th century.

Tens of thousands of people come together in Buñol, Spain, for the La Tomatina Festival each August, during which time over 100 tons of tomatoes are thrown in what is often called the world’s biggest food fight!

By botanical definition, the tomato is actually a fruit—a berry to be exact. However, in 1893 the U.S. Supreme Court ruled that they are “vegetables,” a classification of how they are eaten rather than of their biological origins.

Studies suggest that tomatoes and tomato products can be beneficial in improving cardiovascular health as well as fighting cancer, especially prostate, pancreatic, ovarian and gastric cancer.

Tomatoes obtain their bright yellow, orange, or red skin color and flesh from phytochemicals known as carotenoids, which include mainly lycopene (a powerful antioxidant) and also beta-carotene (a vitamin A precursor). While over 80% of lycopene in the American diet comes from tomatoes and tomato products, this antioxidant can be found also in watermelon, guava, and pink grapefruit. Tomatoes are also a source of flavonoids—compounds that are a subclass of polyphenols that are also important antioxidants.

The nutritional value of tomatoes can be affected by different kinds of processing. For example, cooking them or processing them as purees or juice increases the bioavailability of lycopene. This means that the body can absorb higher amounts of this powerful antioxidant. Research focused on lycopene in regards to possible benefits of tomatoes for the prostate health. However, it has now been suggested that the health benefits may not come from the lycopene alone, but rather from the interaction of it with different plant compounds in tomatoes such as other carotenoids, polyphenols, and vitamins C and E.

A recent study conducted by the University of Missouri-Columbia(3) with rat prostate cancer cells seems to support both—the influence of processing methods and interaction between tomato compounds. The research suggests that an antioxidative organic carbohydrate (FruHis), which develops when tomatoes are dehydrated, may not only help prevent prostate cancer, but also may inhibit the growth of prostate cancer cells when combined with lycopene. Furthermore, when rats were fed the tomato paste and FruHis, fewer developed prostate tumors than those in the control group or on a diet of tomato paste or tomato powder. Further research is necessary to determine how active compounds or processing methods influence possible benefits of tomatoes on prostate cancer and other diseases.

Tomatoes are also thought to promote cardiovascular health in very positive ways. A small clinical study published in 2007 by the University of Oulu, Finland(4), showed that the daily consumption of tomato juice and ketchup may lower “bad” LDL-cholesterol levels and increase the resistance of LDL to oxidation. In its oxidized form, LDL plays a key role in the development of atherosclerotic plaques, which block the blood flow in arteries and may cause strokes or heart attacks. 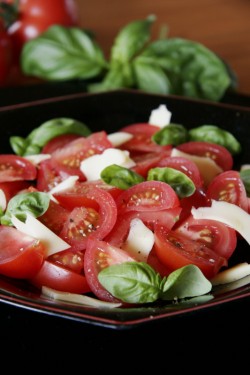 Lycopene and beta-carotene are both fat-soluble compounds, which means the body absorbs them as it absorbs fats. Therefore, adding fat from avocados or heart-healthy extra virgin olive oil to a tomato dish appears to be a good idea since it will improve the bioavailability of health-giving compounds. So the next time you’re ordering appetizers, consider having either tomatoes with a little feta cheese or sliced tomatoes with mozzarella cheese and fresh basil—with a little extra virgin olive oil drizzled on top—as it is tradition in e.g. Mediterranean countries.

It is important to remember that a diet high in a variety of fruits and vegetables is generally associated with a large range of health benefits. In an animal study by the University of Illinois at Urbana-Champaign(5), whole tomato powder, whole broccoli powder, a combination of both, and lycopene were tested on their prostate cancer fighting abilities. The winner was the combination of tomato and broccoli powder, showing that variety is key.

Besides containing health-beneficial phytochemicals, tomatoes are a great source of vitamins C, A, and K, as well as potassium and manganese. In the nutritional facts(6) table provided below, the values are year-round averages for one cup of chopped ripe red tomatoes.

Tips on Getting the Tastiest Tomatoes

Although some varieties of tomatoes are produced year-round in the United States, many in our local markets in winter months are imported from other countries, such as Mexico. For information on when tomatoes and other fruits and vegetables are in season in your region, check out the Eat Local Web page provided by the Natural Resources Defense Council.

To select the best tomatoes, look for those that are medium-sized, firm, and plump, without soft spots or cracks. Vine-ripened tomatoes are usually the most flavorful because they are harvested at maturity, unlike most commercial varieties. When tomatoes are in season, try to shop at your local farmers markets whenever possible. By doing so, you’ll be able to find great tasting organic produce, support local businesses, and help save natural resources that would otherwise be used to transport produce into your area.

To help your tomatoes taste their best, try storing them at room temperature. Although they will last longer when stored in a refrigerator at a temperature below 50 degrees Fahrenheit, they will simply lose a lot of their flavor.

When buying processed tomato products, make sure to check the ingredients list to avoid common additives such as preservatives, vegetable oils, and high fructose corn syrup. Pay extra attention when buying tomato juice, which can be high in sodium, and ketchup, which often contains too much sugar!

If you’d like to grow your own tomatoes, you’ll find that it is a relatively simple task that can also reduce your grocery bill. Since all they need is plenty of water and a place in the sun, you can plant them in your garden or, if your outdoor space is limited, in a pot. One single plant can produce tomatoes easily worth more than $100 at your local grocery store!

Two gardening tips: First, make sure your tomato plants are watered on the bottom only—they don’t like getting too much rain or water poured directly on top of them. Second, water them regularly; they do not like big fluctuations in soil moisture. For more information on growing great tomatoes, check out the gardening tips from the Organic Gardening Website.

No matter how you enjoy tomatoes—raw, cooked, or dried—we hope you will be sure to include them for a healthier and more well balanced diet!

(5) University of Illinois at Urbana-Champaign, ACES News: Tomato-broccoli together shown to be effective against prostate cancer. www.News.Illinois.edu, January 2007.