Nutrition: Some Spuds are Healthy Studs…Potatoes 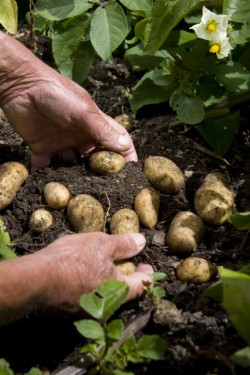 Potatoes are considered by many (including us!) to be one of the most satisfying foods. Whether featured as a side dish or main course, they are also a favorite comfort food to many. Regardless of which kind you prefer—white or sweet—you may be surprised to discover just how many health benefits you can enjoy when potatoes are freshly prepared.

In addition to their vitamin, mineral and fiber content, white potatoes are a good source of antioxidative phytochemicals known as phenols and polyphenols, which may reduce oxidative stress and prevent resulting degenerative diseases. Read More

Sweet potatoes are a great source of the antioxidant beta-carotene and may have antioxidative properties and antidiabetic effects. Read More

Athletes especially can benefit a great deal from adding potatoes to their diet. When included in meals smartly, after and in-between workouts, these starchy vegetables make a healthy carbohydrate choice. Read More

Before taking a closer look at the potato’s many healthful compounds and providing some tips on identifying the best ones at your local market, we hope you will join us as we explore the origins of these robust and abundant tubers.

Although there are literally thousands of varieties of potatoes, most of us think of potatoes as being either white or sweet. Generally speaking, white potatoes are believed to have been domesticated in the Andes of Southern Peru as far back as 10,000 years ago. While the origin of the sweet potato is more debated, most believe they were first domesticated in Central or South America about 5,000 years ago.

Early Spanish explorers of the Americas first brought both potato and sweet potato plants back to Spain from the late 15th century to the late 16th century. From there, the hardy plants were spread throughout Europe and to many other countries around the world before arriving in North America in the 17th century.

Interestingly, early explorers took potatoes aboard their ships as an important food source after discovering that potatoes were not only a cheap and uncomplicated way to feed the crews, but also an effective way to prevent scurvy (due to their high vitamin C content).

You might be surprised to discover the nutritional wallop packed by a seemingly ordinary spud. Both white and sweet potatoes contain fiber, vitamins, minerals, and other compounds that can contribute to a healthy diet.

Common white-, red- russet-, purple- and yellow-skinned potatoes have been found to contain a variety of phytochemicals, such as phenolic plant compounds, polyphenolic flavonoids, and carotenoids, which may reduce oxidative stress and thus lessen certain degenerative diseases. However, s ince there are many different kinds of potatoes available, the question is: are they equal in terms of health benefits?

Phenolic plant compounds reportedly have antimicrobial effects and can fight cancer and improve both cholesterol and blood sugar levels. Recent tests(1) have revealed that the highest amounts of these compounds are found in red- and purple-colored potatoes. In one study, the range of the phenolic content between potatoes varied by as much as 171-fold in 100 grams of a fresh potato—the lowest being found in Kennebec potatoes at 1.03mg phenolics, and the highest in Purple Peruvian potatoes at 171mg phenolics.

Interestingly, the color purple on potatoes actually stems from anthocyanins, a subclass of flavonoids, which in turn are a subclass of polyphenols. They are powerful antioxidants that are known for anti-inflammatory, anti-mutagenic, and cardioprotective effects. It is believed that eating foods that contain anthocyanins may improve the overall antioxidant defense status of human plasma.

A number of animal studies suggest that potatoes also have potentially antioxidative and blood lipid-lowering effects and thus benefit cardiovascular health. The effects are thought to stem from both phytochemical and fiber content. Since the potato skin contains a large percentage of its antioxidants and fiber, we hope you’ll add more unpeeled potatoes to your favorite recipes!

Readily available sweet potatoes are a rich source of beta-carotene, an important antioxidant often associated with yellow and orange fruits and vegetables. Our body uses it as a precursor for vitamin A, which is vital for vision, the reproductive system, and the growth, development and differentiation of tissues and bones .

In a study(2) published in 2008 by the University of Vienna, Austria, 27 type 2 diabetes patients received either a placebo or 2-gram tablets of an Asian white-skinned sweet potato (Caiapo) twice a day for five months. In the group that received the sweet potato tablets, the researchers found significantly lowered fasting glucose and triglyceride values as well as an increase of a hormone called adiponectin—indicating a better insulin sensitivity. In addition to these antidiabetic effects, this group also experienced a decrease in a protein called fibrinogen, which suggests that sweet potatoes also may have antiatherosclerotic effects. Other studies(3) have shown that sweet potatoes and their leaves (also used as a vegetable) may have antioxidative, antimutagenic, and chemopreventive effects as well.

Curious Fact: Have you ever wondered why potatoes and sweet potatoes turn brown after being cut or peeled? Phenols, the same compounds that benefit our health, cause the browning in a complex enzymatic reaction involving amino acids, oxygen and enzymes.

In addition to containing lots of vitamin C and health-beneficial phytochemicals, white-, yellow- and red-skinned potatoes are good sources of vitamin B6 while sweet potatoes are high in vitamin A. All varieties of potatoes provide dietary fiber, most of which is found in the skin. In the nutritional facts table(4) provided below, the values are given for one cup of raw potatoes with skin:

Tips on Selecting the Best Potatoes

Potatoes come with many different flesh and skin colors, ranging from white to pink, yellow, orange and purple. In many countries, you’ll find that they are available year-round. However, in the U.S., freshly harvested young or immature potatoes, sometimes called “new” potatoes, are available during the spring and summer, while mature potatoes are not available until they are harvested in the fall.

When given a choice, always opt for the firmest potatoes. When buying white potatoes, such as Russets, or red ones, such as Red Pontiacs, you should avoid the ones with green spots, sprouting, or any kind of bruising. When exposed to light, potatoes develop green spots, which contain a substance called solanine that not only tastes bitter, but is also poisonous. Sprouting indicates the potato is not fresh, and bruised potatoes rot easily. Also, make sure that prepackaged potatoes show no signs of dampness. If you store them in a cool, dark and dry place at home at temperatures of about 45˚–50˚F, they can stay fresh for up to several weeks.

The versatile sweet potatoes—which taste great in both main dishes and sweet desserts—also need to be stored dry, ideally in temperatures ranging from 55˚–65˚F. When shopping for sweet potatoes look for firm roots without bruises or cracks. Flesh colors can range from white to yellow, orange, red and purple. Like white potatoes, they’re available year-round, although they are freshest after their harvest in fall and winter. Sometimes, sweet potatoes in U.S. grocery stores are confusingly called yams. However, real yams are relatively rare in the US ; they’re generally sweeter than sweet potatoes and can grow many feet in length.

During the cooking process, the starch within potatoes becomes more available and readily digestible. To avoid overcooking, try steaming your spuds for a healthy and slightly different texture. Also, potatoes should be cooked whole, as tests(5) have shown that they may lose up to 75% of their minerals, such as potassium, when cubed and then boiled.

From a health perspective, if you are not training in high-energy demanding workouts small waxy potatoes are preferable to larger varieties, such as Russets, because they have a lower starch content and glycemic index (GI). Additionally, larger potatoes often are processed extensively to make dishes like mashed potatoes, which require a shorter digestion time and can cause spikes in blood sugar and insulin levels. Baked potatoes, treated with high heat, are even worse, as they have been shown in some tests to yield a GI over 100—higher than pure glucose!

The popular potato dish, “French fries,” unfortunately is one of the unhealthiest food choices you can make because of processing that includes deep frying in oil. As a result, those seemingly harmless “fries on the side” can be high in saturated fat and can contain trans-fatty acids. According to the Harvard School of Public Health, you increase your risk of coronary heart disease by 23% for every additional 2% of daily calories stemming from trans-fats—an amount that can be found in a single medium order of fast-food French fries.

A Healthy Substitutions Tip: If you like a bite of potato salad every once in a while, try it cold with a vinaigrette dressing instead of warm and loaded with mayonnaise. The cooling of the potatoes results in a higher amount of so-called resistant starches (a form of dietary fiber that cannot be digested in the small intestine) and the vinegar will slow the gastric emptying, which results in an even lower GI.

Potatoes are often associated with a poor diet—one that’s high in meat and low in fruits and vegetables. However, when they’re included in a healthy and balanced diet, they can be a great source of nutrition. We recommend choosing sweet potatoes or small red waxy potatoes whenever possible and limiting portion sizes to one or two small–medium ones.


A Special Note to our Fitness and Health Seekers

In order to perform at their best, athletes, especially those engaged in endurance sports, need to include higher amounts of carbohydrates in their daily meals. To cope with the high energy demand of long training sessions and races, calorie dense starchy foods are essential to the diet. And the tasty potato is probably one of the best sources for these calories.

Potatoes are a very satisfying food, high in antioxidants and easy to digest. There is a potato for everyone’s taste, ready to be combined with almost anything (preferably with other non-starchy vegetables because of potatoes’ low fiber content). For all these reasons we suggest to athletes to include and maybe even prefer potatoes over other starchy foods. It will help the athlete to have an easily digestible source of much needed energy.

Also, depending on the type and preparation of the potato, the glycemic index will vary. Why is the knowledge of a potato’s GI important for athletes?

A Practical Tip: Eat baked potatoes or a dish of mashed potato made from Russet potatoes after workouts, and eat sweet or waxy potatoes in-between workouts.

We hope you’ll find good use for a healthy potato or sweet potato in your home-cooked meals. Enjoy!