By Dieter Hogen and Janett Walter, with support of the Take The Magic Step™ nutrition staff.
Tweet 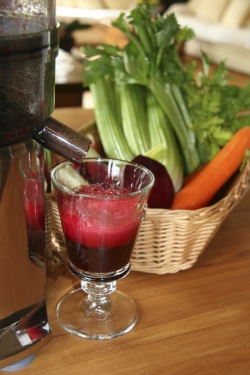 Advertisements and descriptions for health-benefiting products, such as green tea, fruits and vegetables, nutritional supplements and anti-aging-creams, often include claims like “neutralizes free radicals,” “helps the body against oxidative stress,” “provides powerful antioxidant protection” or “helps delay the aging process.” The common theme: They promise to fight free radicals to maintain youth and health.

Understanding how free radicals affect you can help you to make the right health decisions. Let’s start by looking at the chemical aspects of free radicals and then, using that knowledge, see how they should influence your diet and exercise program.

What are Free Radicals?

A free radical is an atom or molecule with an unpaired electron.

Atoms contain a nucleus with a certain number of protons. For the atom to be stable, a corresponding number of paired electrons must spin around that nucleus. Losing an electron and, thus, leaving the atom with an unpaired electron creates a very unstable situation, making that atom in the real sense of the word a “free radical” – it attacks another, most likely neighboring atom or molecule (one or more atoms bound together) to get an electron back. This “attack” then makes the other atom or molecule unstable, starting a chain reaction. The process of “stealing” or breaking off electrons is also known as “oxidation.”

Free radicals are essential to life and constantly formed in the human body. There is, for example, no creation of energy or optimum function of the immune system without free radicals.
After air is inhaled, oxygen is transported to every cell of the body. There, the body’s own cellular “power plants,” known as mitochondria, convert broken-down food components in an oxygen-dependent process into energy. Throughout this process, oxygen-derived free radicals are formed.
White blood cells (leukocytes, which aid the immune process) produce free radicals(1) to kill pathogens such as bacteria and viruses.

Under normal circumstances the body has no problem dealing with free radical production, for two reasons. First, as part of evolution and its dependency on oxygen, the body adapted and developed complex protective systems to deal with free radicals and protect itself from oxidative damage by producing powerful antioxidative enzymes, such as superoxid dismutase, catalase and glutathione peroxidase. With their help free radicals are converted into less reactive species.

However, a certain amount of oxidative damage as a result of the action of “escaped” free radicals cannot be prevented. Therefore, and second, the body developed damage-repair mechanisms as well.

Unfortunately, free radical production is not limited to normal metabolic processes. Lifestyle and environmental factors that may easily overwhelm all defense mechanisms include:

The less our exposure to these substances, the less our bodies must deal with free radical production.

Excessive free radical production and the resulting oxidative stress can harm cell components like proteins, lipids, DNA and even lead to untimely cell death. Under those conditions we do not just speed up the aging process in general, but degenerative diseases such as cancer, atherosclerosis, Alzheimer’s or arthritis are much more likely to occur. The concept of free radicals contributing to aging is also known as the free radical theory of aging. It was proposed by Denham Harman in 1956.

When it comes to exercise, there is sometimes a misunderstanding about how the body deals with the increased stress.

Athletes, especially endurance athletes such as runners, bikers, triathletes and cross-country skiers, are confronted with elevated oxidative stress while working out. Because they process more oxygen, their metabolism generates more free radicals. It would seem, then, that regular exercise could increase one’s exposure to the damaging effects of free radicals.

Regular exercise, however, results in adaptations that increase the body’s antioxidative defenses. In fact, it may even offer additional protection when the body is at rest(2). These ideas are supported by the fact that regular exercise is associated with many health benefits such as a reduced risk of cardiovascular diseases and cancer. But the adaptation process takes time, and occurs only among regular exercisers. This is why weekend warriors sometimes do more damage than good. Because they do not work out often enough, their bodies don’t fully adapt to the stress.
Daily exercise, as a combination of endurance and strength work, is best for overall health benefits.
However, as we get older, even under ideal conditions, important endogenous protective and reparative mechanisms decline, and free radical damage accumulates(3).

Antioxidants protect the body from free radicals and slow oxidative stress. They can either prevent the formation of free radicals, or they scavenge and neutralize existing ones. Therefore, antioxidants seem to be one way to delay aging and the development of degenerative diseases.

Antioxidative properties can be found in a number of vitamins and phytochemicals. Examples are:

We all know that the vitamins, minerals and phytochemicals contained in fruits and vegetables, legumes, nuts and seeds, and green tea provide powerful protection to free radical damage.
The body’s antioxidative enzymes, for example, depend on minerals like selenium, manganese, zinc and copper for optimum functioning. Selenium, in particular, seems to be a key player. People who live in areas with very low levels of selenium in the soil and who do not supplement the mineral show much higher incidences of kidney, bladder or prostate cancer. Therefore, selenium should be provided in your diet sufficiently. Food choices rich in selenium are fish, whole-grain products, Brazil nuts, chicken and garlic.

In November 2007 the Agricultural Research Service of the U.S. Department of Agriculture published a new database that gives information on the antioxidant values of 275 foods(4). They ranked the foods by comparing antioxidant concentrations in typical serving sizes of each food. Among the foods with highest values were dark chocolate, berries, apples, pomegranate, plums, red wine, artichokes, pears and nuts. They also noted spices and herbs as great sources of antioxidants.

Free radicals, and their involvement in aging processes and health, are complex and multifaceted. Scientists still have much research to do to clarify the mechanisms behind these processes, and other topics associated with free radicals. However, it’s safe to say that regular exercise, stress management and good water and food choices, including plenty of fruits and vegetables rich in antioxidants, are essential building blocks for a long, healthy life.