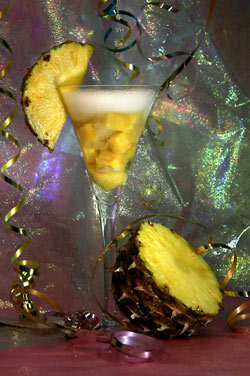 Ever since Christopher Columbus stumbled across the exotic pineapple on an island of South America, the tasty fruit has been a part of celebrations and a sign of hospitality all over the world.

A glass of Champagne with chunks of pineapple is considered to be a traditional New Year’s Eve drink in Germany. In China, eating pineapples during the Lunar New Year’s celebrations symbolizes upcoming prosperity throughout the New Year.

In the United States pineapples are a symbol of hospitality. In colonial days, its delicious flavor was treasured as a rare delicacy and pineapples were presented to show guests respect and appreciation. Pineapple images were later incorporated as decorative elements in wood carvings, tablecloths, and napkins.

But pineapple’s real treasure is its nutritional value. In addition to excellent vitamin C content, pineapples contain a substance known as bromelain which has shown anti-inflammatory and digestion-promoting effects. Read More

When shopping for pineapple, look for a heavy and firm fruit with a sweet scent. Canned pineapples should be avoided. Read more

During Christopher Columbus’ second expedition to America in 1493 he landed on the South American Island of Guadeloupe. Reportedly, he and his fellow sailors first laid their eyes on pineapples in an Indian village on the small island(1).

The Spanish called the fruit the “Pine of the Indies” as it reminded them of a pinecone. Later, the English added the name “apple” for the flesh’s texture, and the fruit that is thought to have originated in Brazil and Paraguay became known as the pineapple. Sailors brought pineapples on board their ships to protect themselves against scurvy and soon had introduced the fruit to tables in Europe and eventually North America.

Today over 500 years after Columbus’s discovery, pineapples are the second most popular tropical fruits in the United States after bananas.

Pineapples belong to the botanical plant family Bromeliaceae. This name hints at an active substance, Bromelain, found in the stems (known as stem bromelain) of pineapples, and in the pineapple fruit (known as fruit bromelain) itself. Bromelain is not a single compound, but rather a compound-mix made up of protein-digesting enzymes as well as other enzymes and components(2).

The anti-inflammatory properties of bromelain may help control tissue swelling and inflammation caused by illnesses such as sinusitis and osteoarthritis(4).

Also, bromelain, among other enzymes, is used to decrease symptoms of inflammation from sport injuries and rheumatoid disorders, and has been found to support wound healing.

Another very beneficial effect of bromelain is its ability to help promote and maintain a well-functioning digestion due to its protein-digesting properties. Furthermore, animal studies indicate that bromelain may be of help against bacteria-derived diarrhea. Both effects can benefit gastrointestinal health.

Pineapples are a great source of vitamin C. Additional nutritional information(5) is provided in the table below. The values are given for one cup of raw pineapple.

Eating vitamin C rich pineapples may aid in preventing a cold or even feeling better faster when fighting a cold, especially now in the chilly winter time.

Some studies indicate that the duration and severity of colds may be decreased by vitamin C. Interestingly, endurance athletes such as skiers or marathon runners may reduce their risk to develop a cold by 50%(6).

Tips on Selecting the Best Pineapples

Once harvested, pineapples won’t continue to ripen, but may sweeten and will soften. When it comes to selecting ripe pineapples heaviness in comparison to size and a sweet scent are good indicators. However, the fruits should not be too soft or have dark marks and bruises. The crown of leaves should be fresh and have a dark-green color. A musty or fermented smelling fruit may be already spoiled. A good test for ripeness is to grasp a center leaf and tug it. If it comes free, chances are your pineapple is ripe.

Always buy pineapple fresh, never canned. Canned pineapple can contain unwanted added sugars.
After the pineapple is cut-up, it is important to refrigerate the chunks in an airtight colored container to ensure freshness for a couple of days and to prevent browning (caused by light exposure).

When stored at room temperature whole pineapples will last only for a couple days. If you cannot eat the fruit right away, store the fruit as a whole in the refrigerator but without the upper leave crown (remove the crown by twisting it carefully). Without the crown, pineapple seems to stay fresher longer and can be maintained for about a week. A storage temperature of approx. 45°F is recommended.

And remember—freshly cut-up pineapple makes a great refreshing snack for young and old!