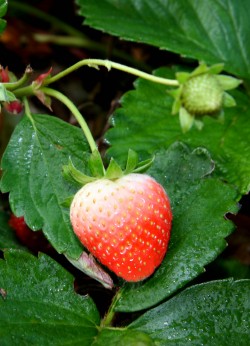 Over many months each year berries are ripening in gardens and in the wild all over the world! Those colorful little morsels, such as strawberries, raspberries, blackberries, blueberries, and black currants, are not only delicious, but also very nutritious seasonal delights.

Berries are just one of the many fruits (and vegetables!) that are not only bursting with health-benefiting fiber and nutrients such as vitamins and minerals, they also are packed with phytochemicals. (The term “phyto” is of Greek origin, and means “plant.”) While thousands of phytochemicals have been identified, only a few hundred of them are currently being researched. Many are believed to have positive effects on our health, most likely because they act in a complementary, synergistic, or additive way. And the results for you? A possible reduction in the occurrences of a variety of diseases as well as a slowing of the aging process of the brain.

Berries—wild as well as cultivated varieties—have been a cherished part of our culture for centuries. Around 350 B.C. the Greeks began harvesting raspberries for food and medical purposes. With the spread of the Roman Empire came the cultivation of raspberries throughout Europe. By 1737, the raspberry had reached American colonies.

The Greeks gathered wild blackberries approximately 2,000 years ago, and during the 16th century, Europeans used the leaves and fruit for medical purposes. By the 19th and 20th centuries, cultivation had started, and settlers brought the berries to America. Blackberries weren’t only a source of nutrition, they also served a functional purpose: fully grown, they provided excellent hedges with sharp thorns that kept marauders out.

It wasn’t until the Middle Ages that strawberries gained popularity. At that time, they were added to elixirs as cures against many ailments. Interestingly, strawberries were already cultivated and traded in South America a long time before the Spanish explorers even arrived.

Blueberries have their origin in North America. Native American tribes used blueberries in their everyday diet and for medical purposes—its juice was for example thought to help fight colds. The Native Americans introduced blueberries to the first settlers, which came to America. Ever since, this delicious fruit has been used as an ingredient in foods or simply eaten plain.

Black currants which are lesser known in the United States, but are very popular in Europe, have their origin in Northern Asia and Europe. Chinese folk medicine has incorporated black currants for over 1,000 years. 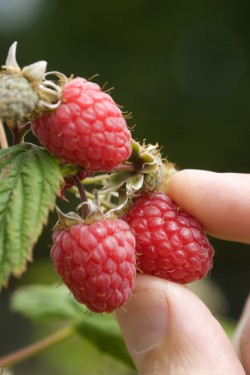 No matter what kind of berry, each can provide a number of health benefits. The phytochemicals that give berries their beautiful and bright red, purple, blue, and black colors are known as anthocyanins, a word derived from the Greek anthos (flower) and kyanos (blue). Anthocyanins are also responsible for some of the great health benefits berries have to offer. Chemically, they are a subclass of flavonoids (a group of plant compounds with a common chemical structure), which are a subclass of polyphenols (a chemical class found in a variety of foods including berries, tea, and chocolate). Studies suggest that polyphenols may be responsible, at least in part, for the antioxidant, anti-inflammatory, and anti-carcinogenic effects of fruits and vegetables(1). Berries contain some of the highest amounts of polyphenols, as well as other compounds such as antibacterial tannins and cholesterol-lowering stilbenes.

Anthocyanins, which are the best-studied phenolic compounds in berries, are powerful antioxidants known for their anti-inflammatory, anti-mutagenic, and cardio-protective effects. They protect us from free radicals, which can cause oxidative stress thought to be involved in many degenerative diseases, including cancer, cardiovascular, and neurodegenerative diseases. Research shows that berry phytochemicals are not only beneficial as antioxidatives, but that they also may facilitate detoxification, influence the activities of digestive enzymes, and act as an anti-inflammatory through the modulation of gene expression (the process that turns genetic information into a product, which is usually a protein). 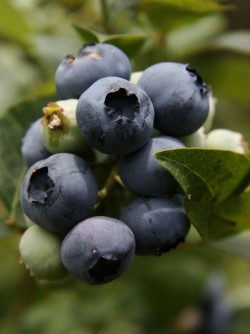 Strawberries, as well as blueberries—whose anthocyanins have been shown to be able to cross the blood-brain barrier—may be beneficial when it comes to slowing the aging process of the brain. After much laboratory research in this field, the encouraging results of a small preliminary human trial were published in the spring of 2010(2). Researchers at the University of Cincinnati studied nine adults in their 70’s with age-related memory decline who received about 2-2½ cups of wild blueberry juice daily for 12 weeks and compared them to a group that had received a placebo. The participants of the blueberry juice group improved significantly in learning and memory tests. As a result, larger human clinical trials are now needed to determine if regular consumption of blueberries is truly effective as a memory enhancer.

In the meantime, including berries in your diet on a regular basis may have benefits other than possibly keeping your mind sharp. A human trial(3) with 48 participants using a freeze-dried blueberry beverage indicates that its consumption may promote the cardiovascular health through improving the blood pressure and lowering the oxidized form of the so called bad cholesterol, LDL, which is a risk factor for atherosclerosis and therefore strokes and heart attacks.

The spectrum of health benefits provided by berries may also include an impact on human gastrointestinal pathogens. Strawberries and raspberries, for example, may be of value as they possess clear antimicrobial effects against human pathogens, thanks to the substance class known as tannins. This is potentially great news as bacteria of the Salmonella, Staphylococcus, Helicobacter and Bacillus species are especially sensitive to berry tannins. Furthermore, growths of Escherichia, Clostridium and Campylobacter bacteria species have also been found to be suppressed in studies(4). One day, berry phytochemicals could be applied to new food products as a more natural antimicrobial agent.

So what could be even healthier than eating one kind of berry? Eating several berries combined! Research has shown that consuming a variety of berries(5), such as blueberries, raspberries, strawberries, bilberries, elderberries, and cranberries, provides even greater benefits of their effects as antioxidants, antibacterials, and antiangiogenics (the latter hinders the development of new blood vessels in tumors and varicose veins).

If you don’t regularly eat berries, the good news is that only 100 grams—or about 3.5 ounces—can contain up to about 500 milligrams of those powerful anthocyanins. However, it has been estimated by scientists that the average American consumes only about 12.5 mg of anthocyanins daily(6). By incorporating just a handful of berries a day into your diet, you may be doing something really good for your health! The question that remains is exactly how many berries a person should eat each day for the maximum benefit. Researchers don’t know for sure at this time, but it’s clear we should eat more of all types of berries.

Only two of the berries mentioned in this article are actually berries. In botanical terms (by the type of fruit), blueberries and black currants are the only real berries of the bunch! Some other real berries include tomatoes, grapes, and the very antioxidant-rich açai berry from South America.

Interestingly, actual strawberry plant fruits are what appear to be the seeds on the surface of the red berry! These tiny little dry fruits are called achenes, and contain one even tinier seed inside. The red tasty flesh is actually the enlarged receptacle of the flower.

Both raspberries and blackberries are called aggregate fruits. The individual segments or parts of the fruits are called drupelets, which are also little fruits that have a seed inside.

Regardless of which berries are the real deal, they all incorporate beneficial compounds that we hope are—or will become—a part of your diet.

As detailed in our nutritional facts table(7), berries are low in calories and are a good to excellent source of dietary fiber, minerals such as magnesium, zinc, and iron, and vitamins C, K, and folate. All values are per one cup of fruit.

Tips on Selecting the Freshest Berries

In general, berries stay fresh for only a short time and should be eaten or frozen within a day or two of purchase. So how do you determine if berries are fresh at the grocery store or market? Here are a few hints we hope will be useful on your next shopping trip:

I now always open containers before I buy them because many times I’ve discovered moldy strawberries in the middle of the box—squeezed in and damaged—only after I’ve gotten home.

The best time to buy strawberries is May through July; for raspberries, midsummer; for blackberries, late summer; and for blueberries, all summer. The freshest ones can be found at local farmers markets, where you also have the opportunity to support growers in your area. The Environmental Working Group’s 2010 “Shoppers Guide to Pesticides” lists strawberries and blueberries in the top five of their dirty dozen list, so we recommend buying organic berries whenever possible to avoid potential exposure to pesticides. 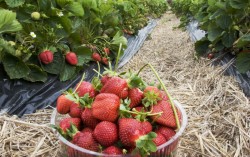 Store-bought berries can be quite expensive, and not everybody can afford them on a regular basis. The good news is that berries are easy to grow at home and can be a fun undertaking for you and your family. Why not replace regular bushes or hedges around the house with raspberry, blackberry or blackcurrant bushes? They look great and your kids can eat the berries right away after a good rinse with water. Have the kids help you with the plants since they may be more willing to eat and try new fruits and vegetables when they have helped grow them. An added benefit to growing your own berries is that you don’t have to worry about pesticides or other toxins used in conventional farming today.

If you don’t have a garden, try growing strawberries in flowerpots on your balcony or patio as I love to do. It’s a great joy to grow your own fruits especially when all they need is sun and water! If you have leftovers, freeze them right away. I like to separate them on a tray so that they freeze individually before I divide them into portion-sized containers to enjoy during the colder months.

Want to do something positive for your body—and perhaps even your mind—this summer and throughout the year? Just grab a handful of colorful mixed berries every day! Their phytochemicals may help fight cancer, protect your body from oxidative stress, slow aging, improve your gastrointestinal system, and keep your heart healthy. And even better, your taste buds will love you for it!

For recipe ideas check out our article “A Healthy Kitchen: A Fruitful Summer.”