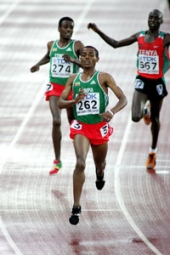 The Ethiopian Kenenisa Bekele lived up to his role as the favorite. He won the 10,000-meter race at the World Championships in Helsinki in 27:08.33 minutes and defended his title. Two years ago he had won his first major gold medal at the Paris World Championships where he had beaten his role model Haile Gebrselassie.

While Gebrselassie, who prepares for the Amsterdam Marathon right now, was not attending the Championships, another Ethiopian, Sileshi Sihine, won the silver medal (27:08.87). But the Ethiopians missed the triple triumph they hoped to achieve. The competitors were stronger than expected. Kenyan Moses Mosop finished third (27:08.96). And he almost caught Sihine with a fast final sprint.

After a relatively slow first half of 13:51.10 minutes, a race developed with a lot of changes in speed. The Ethiopians, who controlled most of the race, tried to get rid of their competitors. Repeatedly, they increased the pace. But their tactics didn’t work this time. Even in the final lap seven athletes were still in the leading group. “I really shivered because it was so thrilling,” said Jos Hermens, Kenenisa Bekele’s manager from the Netherlands.

When Kenenisa Bekele took the lead in the final curve he kept it until the end. The 23-year-old won the sprint. While Sihine got second Moses Mosop had a strong finish. The fourth place was taken by Boniface Kiprop (Uganda/27:10.98) while Martin Mathati (Kenya) took the fifth place. He was the one who always stayed with the Ethiopians when they increased the pace, and he prevented that the Ethiopians were able to set off. Juan Carlos de la Ossa (Spain) finished tenth in 27:33.42 minutes. He was the best European.

“It is hard to keep high speed in the first half of the race without any pacemaker. That probably was the reason why we didn’t won three medals,” Kenenisa Bekele said and added: “I am not running the 5,000 meters here.” But it might be possible that the officials of the Ethiopian federation influence him to compete at the 5,000m.

“I came here to run a good race and to win a medal. I knew that the chance to get the gold medal wasn’t really there but the bronze medal is superb for me,” 20-year-old Kenyan Moses Mosop said.

In the second final of the evening Docus Inzikuru (Uganda) won the 3,000m steeplechase of the women, which was contested for the first time at these championships. She clocked 9:18.24 minutes. “I am happy to have won this medal for Uganda. I had not intended to run in the lead for the whole time but on the other hand I prefer running in front of the others,” Docus Inzikuru said. Russian Yekaterina Volkova was second with 9:20.49 minutes while Kenya’s Jeruto Kiptum ran a national record for third place with 9:26.95.