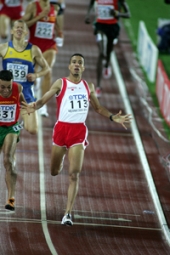 Rashid Ramzi won the first medal in an outdoor World Championship ever for Bahrain. The 25-year-old became the successor of Hicham El Guerrouj (Morocco) in the 1500 meters. El Guerrouj could not compete this year due to an injury. He had won the title at the 1500m four times in a row. It is delicate that Rashid Ramzi is originally from Morocco as well but transferred to Bahrain, where he lives now, in 2002. Furthermore he prevented a real Moroccan triumph because Adil Kaouch from Morocco was second.

After a slow beginning, it was the US-American Alan Webb who brought energy into the final. After two laps he suddenly increased the pace and tried to get rid of his competitors. But that didn’t work out with so many high class athletes in the field. The Kenyan Alex Kipchirchir closed the gap and already behind him was Rashid Ramzi. At the end of the last curve, the Ukrainian Ivan Heshko was running next to Rashid Ramzi, but couldn’t keep up and finished fourth (3:38.71 minutes). While nobody had a chance to beat Ramzi in the sprint, the former Moroccan won in 3:37.88. Kaouch finished second with 3:38.00 and Rui Silva from Portugal, who beat Heshko in the sprint, was third in 3:38.02 minutes.

“This medal is very important for me and my country. I am very proud of it. There was no real tactic in the race and the weather was a big problem for the athletes,” said Rashid Ramzi. The weather was once more catastrophic with rain, wind and low temperatures. “I focused on the 1500m this year, prepared for Helsinki well and it paid off.” explained Adil Kaouch.

In both 5,000m first round races two Ethiopians finished first and second. They therefore qualified for the finals on Sunday. Tirunesh Dibaba won her prelim race in 14:50.98 minutes in front of Meselech Melkamu (14:51.49) and Joanne Pavey (14:53.82) from Great Britain, who has a chance for a good place in the final. The second prelim race was won by Meseret Defar in 15:13.52 while Ejegayehu Dibaba (15:13.33) was second.