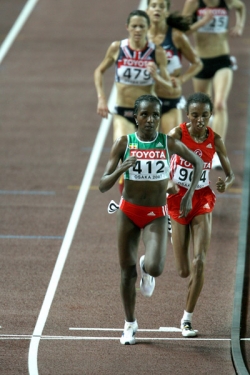 Tirunesh Dibaba checks the stadium screen as she takes the lead entering the last lap of the 10,000m. © www.photorun.net

Tirunesh Dibaba achieved a spectacular hat trick at the World Championships in Osaka: Although only 22 years old, the Ethiopian won gold for the third World Championships in a row-and that despite falling in the middle of the 10,000 meters. She clocked 31:55.41 minutes and will now try to defend the 5,000m title she won in 2005. Turkey’s Elvan Abeylegesse won silver in 31:59.40, while Kara Goucher (USA) sensationally took the bronze in 32:02.05.

Because of the heat and the humidity, the athletes ran slowly for a long time, allowing Belgium’s Nathalie de Vos to lead the race through 5,000m in 16:29.24. The tightly packed running almost ended in disaster for Dibaba, who was running at the tail of the pack and fell after about 5,600m. For a moment it looked as if Dibaba might drop out, but then she started to chase the field, which was already about 50 meters away.

It took roughly two laps for Dibaba, who was also suffering stomach problems, to get back into the lead group. Nonetheless, she was easily able to follow Abeylegesse when she increased the pace after 7,600 meters. Behind the two a thrilling fight for the bronze medal developed among Goucher, Kim Smith (New Zealand) and Britain’s Jo Pavey.

At the front of the field the decisive moment came at the beginning of the last lap. Increasing the pace, Dibaba decisively got away from Abeylegesse. “It was very hot, but I am very happy to have won the race,“ said Dibaba, who commented about her fall: “I am running to represent my country, so dropping out is no option.”

In the fight for third, Pavey and Goucher got rid of Smith. Then in the final straight, the American was the better sprinter. “I can’t believe it—amazing. It’s the best thing that has ever happened to me,” said the 29-year-old Goucher, who has a personal best of 31:17.12. “My coach and my husband both always told me that I could have a chance to take a medal,” said Goucher, who is married to two-time American 5,000m champion Adam Goucher. “With two laps to go I thought, ‘This chance will never come again.’ I knew that if I wouldn’t run as hard as I can now, I would regret it the rest of my whole life. I was very well prepared for the conditions. I did high-altitude training in Utah, and during my recent runs I always wore a sauna suit, which looks like a garbage bag, to get hot and sweaty and to imitate the conditions here.”

Once again, Britain’s Pavey missed a medal. “I am happy with the race, but of course disappointed that I lost the battle against Kara. I really thought I could catch Kara. Now I look forward to do the 5,000,” said Pavey.

Marathoner Deena Kastor (USA) produced a fine result as well, finishing sixth with 32:24.58. She said after the race: “The race was okay for me. But tactically it was weird. There were a lot of misunderstandings in the race and pushing. I made one big mistake by staying in the pack. I got the bill for that in the race. My next race will be the World Half Marathon Championships in October. And my big goal is to win the marathon gold medal next year in Beijing.”