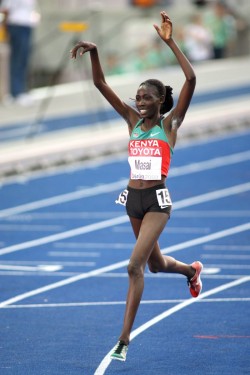 On the opening day of the World Championships in Berlin, the exciting rivalry between East African nations Kenya and Ethiopia heated up when 19-year-old Kenyan Linet Masai upset the two favorite Ethiopians to win the gold medal in the women’s 10,000 meters. Until this year, Ethiopians had won the last five 10,000m World Champion- ship finals. Tirunesh Dibaba’s victory at the Olympics last year also ensured another Ethiopian success at the distance. In Berlin, the 2008 Beijing champion had to make a late withdrawal because of an injury. Despite that, the Ethiopians went into the final as favorites. 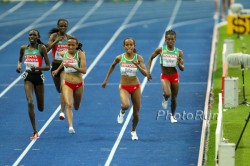 An exciting finish at the women's 10,000m final. © www.photorun.net

For much of the race spectators were treated to a tactical contest—something not geared towards a fast time. This dynamic made the last 200 meters all the more exciting! In the home stretch, the reigning 5,000m world champion, Meseret Defar, led the pack. Then Melkamu made a move and forced her way past Defar, But while Melkamu was celebrating and concentrating on what was happening to her left, she was overtaken just before the finish by Masai.

Masai, on the other hand was delighted by her surprise win. “I can’t believe it. But I never gave up. Our Kenyan team plan was to work with each other,” she said.

Masai’s victory was the first time a Kenyan has won the women’s 10,000m at the World Championships since Sally Barsosio victory in Athens in 1997. Additionally, Kenya hasn’t won a medal in the event since Tegla Loroupe was third in Seville in 1999.

There have already been quite a few surprises on the first morning in the heats of the women’s 3,000m steeplechase. While the Olympic champion and world record holder Gulnara Galkina (Russia) dominated her heat, winning from the front in 9:17.67 minutes in the fastest time of the qualifying round, Germany’s Antje Möldner finished second, qualifying for the first time in her career for a major final. In the Summer Olympics last year, Möldner just missed out on the final in Beijing, but she didn’t let that affect her on Saturday as she broke her own German record by at least five-and-a-half seconds with a time of 9:21.73.

One of the main contenders for a medal has not advanced, however: the defending champion from Russia, Yekaterina Volkova, finished seventh in 9:43.52 in the third heat. Ruth Bisibori of Kenya who finished sixth in the Olympics also qualified for the final by finishing her heat in fifth with 9:27.04.