Women Runners of All Ages Take to Berlin’s Streets

Before the start, runners enjoy the festive atmosphere in the heart of Berlin. © SCC-Events/Camera4

Cheered on by thousands of spectators as well as fellow runners further back in the race, Irina Mikitenko won the 28th AVON RUNNING Berlin Women’s Run on May 14. For the
10-kilometer race, which traditionally leads through Berlin’s Tiergarten, the 38-year-old runner from the SC Gelnhausen broke the finish-line tape in 34 minutes and 31 seconds. Sonja Tajsich from Team Erdinger Alkoholfrei, a long-distance triathlete, came in second nearly a minute later. Third place went to Dawn Domaschk (SCC Berlin) in 36:51. For Irina Mikitenko, it was her third victory at the event after winning in 2006 and 2008.

Women’s running has been becoming more and more popular in recent years throughout Germany. This was shown once again at this year’s event. Taking into account all competitions which comprise the event—the 800-meter “bambini” run, traditional walking, Nordic walking, as well as a 5K and 10K race—17,321 girls and women took to the streets of Berlin. This translates into 2,000 more than last year’s turnout. 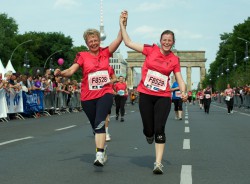 The overall mood in the race was not to compete for the win or collect a finishing medal. Rather, the women wanted to show solidarity for the community, enjoy the spirit of running, and celebrate healthy activity. The runners also supported a good cause—the Berlin Women’s Run is Germany’s biggest charity race for breast cancer research and treatment. One euro of the registration fee (excluding students who take part in the 5K “Run of the Schools”) goes to the Berlin Cancer Organization, which supports the fight against breast cancer. In addition, runners also had the option to join “Sponsored Walk/Run Teams.” These teams raise money from family, friends, or colleagues for each kilometer run. The proceeds then go to a special fund of the Berlin Cancer Organization, which supports women diagnosed with breast cancer who struggle financially. 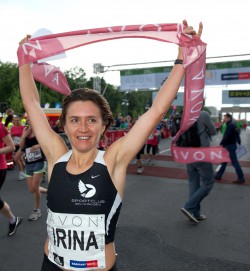 It was Irina Mikitenko’s first race since the Virgin London Marathon and served as a fitness check for her 2011 summer season. Even for her, however, it was not really about running a specific time on Saturday. She told Take The Magic Step® afterwards that she, too, was caught up in the laid-back nature of the race. “For me it was a relaxed race. I started the first lap slowly and ran with Sonja Tajsich to make the pace for her. After about four kilometers, she then took off. Only the last two kilometers I ran really fast. Before that I enjoyed the great atmosphere, and I even had the chance to communicate with the spectators.” Irina Mikitenko’s daughter, Vanessa, took part in the 800m “bambini” run.

Irina will most likely run a few more shorter road races before starting to prepare for a fall marathon. In September or October, the German marathon record holder hopes to qualify for the 2012 Olympic Games in London in the marathon event. 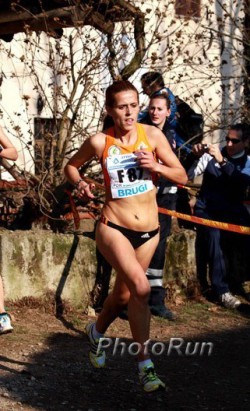 Last Sunday, organizers confirmed what they had originally hoped for: a record turnout at the 24th edition of the dm Vienna Women’s Run. A total of 25,154 women and girls were are the starting line of the race. The vast majority, 20,648, ran the 5K, which began at Vienna’s Prater Amusement Park and ended in the city’s Ernst Happel Stadium. The remaining participants, 4,506, raced the 10K.

The Vienna Women’s Run is the largest race of its kind in the German-speaking world and is the second-most-popular run in Austria behind the Vienna Marathon.

Competitors from 67 countries with ages ranging from six to 81 entered the event. They included approximately 6,200 girls under the age of 18. This large turnout of young women stems from the fact that 130 Viennese schools partnered with the race.

“I’m surprised to have won,” Ana Dulce Felix said afterwards. The Portuguese prevailed over the European cross-country champion, Jessica Augusto of Portugal, who finished in 15:52.4. Germany’s Sabrina Mockenhaupt, a three-time winner of the event, took third in 15:59.3.