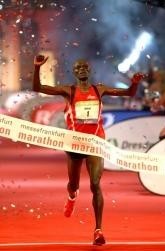 Kenya’s men set their stamp on the 25th Frankfurt Messe Marathon, while two Europeans sprang surprises among the women. The Kenyan Wilfred Kigen repeated his victory of the previous year, running 2:09:06 hours, the second fastest winning time in the history of the oldest German city marathon. In second place was Moses Arusei in 2:10:30, Francis Bowen took third (both from Kenya) with 2:10:49. Kenyans took the first six places and provided nine of the top ten.

The Russian Svetlana Ponomarenko was the winner with a time of 2:30:05, setting a personal best. Springing a surprise in second was the Norwegian Melkevik Otterbu in 2:31:20 from Hafida Izem (Morocco, 2:31:30). The fourth place for Claudia Dreher provided the German highlight of the Frankfurt Marathon. The athlete from the Gänsefurther Sportwegung club ran 2:32:22 but also ran into some bad luck: she missed the qualifying time set by the German Athletics Federation (DLV) for the 2007 World Championships in Osaka by 22 seconds. The best German male finisher was Ulrich Steidl (SSC Hanau-Rodenbach) in 34th place with 2:24:37.

While the weather conditions were windy from time to time and temperatures rose towards the end, 11,227 marathon runners from around 50 countries went to the start of the anniversary race in Frankfurt. It was already 19 degrees Celsius for the 11 o’ clock start. Including competitions held in conjunction, 17,444 athletes took part in the 25th Frankfurt Messe Marathon—the highest ever total in this banking heartland. Around 200,000 spectators lined the streets for the anniversary race.

The pacemakers’ tempo varied even during the early stages, which might have been partly because of the wind. 15:17, 30:20 and 46:06 minutes were the split times for 5, 10 and 15 kilometers. They went through halfway in 1:04:54. The leading group at this point consisted of 18 athletes. There were still 12 of them at 30K (1:32:11). Then the group was reduced to seven runners. Led by the last of the pacemakers, Peter Korir (Kenya), who did not drop out at 35K but finished sixth in 2:12:08, Peter Chebet, Moses Arusei, Wilfred Kigen, Peter Kiprotich, Francis Bowen (all from Kenya) and Kasime Adilo (Ethiopia).

Shortly after the 35K point, Wilfred Kigen began what proved to be his decisive move. The 31-year-old ran the 37th kilometer in 2:54 minutes and that gave him a clear lead from Moses Arusei who later came through to finish second. “For a long time I wasn’t sure if I could win again—but five kilometers from the finish I knew I could do it,” explained Wilfred Kigen, who set the course record of 2:08:29 last year. This latest time of 2:09:06 is the second fastest of his career.

The women’s race was a different story. Three runners from Ethiopia went through the half-marathon point in 1:13:36 with over a minute’s advantage from the eventual winner, Svetlana Ponomarenko (1:14:39): Kutre Dulecha, Deriba Hunde and Robe Tala. Yet none of the three women who shared the lead at halfway managed to finish on the podium. While Kutre Dulecha, the world indoor 1500m champion in 2004, clearly slackened after going into the outright lead, Svetlana Ponomarenko drew closer and closer. At 26 kilometers she had caught Hunde and Tola, overhauling Dulecha for the lead between 30 and 35K, while the latter was to finish sixth (2:33:54). Despite halting for a 40 second “pit stop” to go to the toilet at 37 kilometers, she retained the lead though it probably prevented her breaking 2:30 hours.