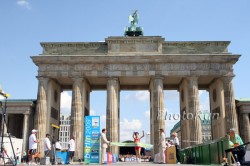 Twelve months ago, Xue Bai of China dreamed about winning a gold medal in the marathon. On Sunday, this dream came true.

Just last year, at the Olympic Games, she finished 21st in the 10,000 meters which was an admirable accomplishment for a 20-year-old, but far from gold. All this changed in Berlin when a beaming Bai broke the tape in 2:25:15 hours. Japanese runner, Yoshimi Ozaki, took silver in 2:25:25, while Aselefech Mergia of Ethiopia placed third with 2:25:32.

Over 100,000 spectators lined the 10-kilometer-loop course that passed underneath Berlin’s famous Brandenburg Gate. The crowd’s energy was incredible as they cheered on the 71 women runners in warm conditions.

Shortly after 25K, the unheralded Russian, Nailiya Yulamanova, pushed the pace at the front which thinned out the large lead pack of 23 runners. Just after 30K, only three runners apart from the Russian formed the leading group: Bai, Ozaki, and Mergia. Shortly before 35K, Yulamanova dropped back, leaving the remaining trio to compete for the gold. At the last water station just before the 1K-long home straight, it was Ozaki who forced the pace. Mergia dropped, but Bai stuck to the heels of the tough Japanese competitor who had won the Tokyo Marathon in 2008. No matter how fast Ozaki ran, she couldn’t shake off a determined Bai. With a mere 1K to go, Bai made her decisive move and passed Ozaki. The best European finisher was Marisa Barrios of Portugal with 2:26:50 for sixth, while the American, Kara Goucher, finished tenth in 2:27:48.

Chinese women runners tend to run long distances and even the marathon at a very early age. Xue Bai is one such example. Just 14 years old, she ran her first marathon. As a 16-year-old, she won both the 5,000m and 10,000m events at the Asian championships in 2005. “This was the first time I’d competed at the World Championships and I never thought I would win the gold here. I didn’t feel any pressure and went into the race feeling relaxed,” said Xue Bai whose name in translation means “White Snow.” “My next ambition will be to win the Olympic title in London in 2012.”

In the absence of Germany’s top marathon runner, Irina Mikitenko, their remaining squad members did not have a significant influence on the contest for the leading places. Mikitenko had withdrawn from the race a few weeks previously following the tragic passing of her father. Sabrina Mockenhaupt, who had originally planned to run the 10,000m, debuted at her first championship marathon with an impressive 2:30:07 (17th overall). Susanne Hahn came in 34th in 2:38:39.

While Irina Mikitenko celebrated her 37th birthday at home in Freigericht in Hessen, Sunday’s race in Berlin did provide her with a birthday present of sorts. After the World Championship marathon in Berlin, she has an almost unbeatable lead in the World Marathon Majors (WMM). The best women marathon runners can win points over a two-year period from the five major races in the world (Boston, London, Berlin, Chicago and New York) as well as the World Championship races and Olympic Games. Approaching the finish of the 2008 – 2009 series where the men’s and women’s winners will each receive $500,000 at the end of the year, Irina Mikitenko is practically unbeatable since the women who scored points in Berlin have no impact on the current rankings.