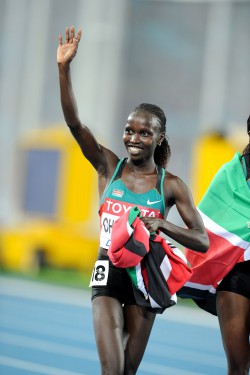 Writing a glorious fresh page in her country’s sporting history, Vivian Cheruiyot became the first Kenyan woman to win both long-distance events at a global championship. The 27-year-old triumphed in the World Championships 5,000m on Friday with a time of 14:55.36 minutes—just six days after winning gold in the 10,000m. Second place went to fellow Kenyan Sylvia Kibet (14:56.21), while Meseret Defar (14:56.94) of Ethiopia captured the bronze.

Vivian joined Tirunesh Dibaba of Ethiopia (Helsinki/2005) as the only female runners to achieve the feat. And Tirunesh, remember, repeated it at the 2008 Olympic Games in Beijing—perhaps a happy harbinger for Vivian’s Olympic prospects in London next year.

“It’s wonderful to see Kenya’s flag right on top after so many finals—and I think there will be a few more medals to come in the next couple of days,” said an elated Vivian.

The 5,000m final developed into a slow, tactical race in which none of the favorites seemed to be in a hurry to make the first move. The initial leader was Japan’s Hitomi Niiya. She took the field through the first kilometer in 3:02.1. Yelena Zadorozhnaya of Russia then went to the front and reached 2K in 6:07.01. At the half, the top contenders began to line up behind her, including defending champion, Vivian Cheruiyot, her fellow Kenyan, Linet Masai, and Meseret Defar, the Olympic 5,000m champion in 2004.

It was then up to Vivian Cheruiyot to take over the lead after they passed the three-kilometer mark in 9:10.97. However she didn’t push the pace at first, and appeared confident in the strength of her finishing kick. Linet Masai ran next to her, and since Meseret Defar, who was behind the two, didn’t surge, the race ultimately came down to a fast and thrilling bell lap.

Vivian Cheruiyot stayed in front and began her final kick with a lap to go, breaking apart the lead group. With 250 meters remaining, three runners were in contention for the gold medal: Vivian, Meseret Defar, and Sylvia Kibet. As they hit the home straight, Vivian’s lead grew with the finish line in sight and it was clear that no one was going to pass her. But the contest for second place was far from decided and the silver medal came down to the last few meters, when Sylvia Kibet passed Meseret Defar. Interestingly, the three women took the same positions on the podium as they did at the World Championships 2009 in Berlin.

Three other African runners, Sentayehu Ejigu (Ethiopia/14:59.99), Mercy Cherono (Kenya/15:00.23), and Linet Masai (15:01.01) followed them across the line. Lauren Fleshman of the United States finished seventh in 15:09.25. Asked about the outstanding success of the Kenyan women in these World Championships, Vivian answered, “One reason is that the Kenyan women do team work during the race, but we have also improved at running the final laps. We put in extra training for this and that is why we are successful now.” Traditionally, Ethiopian women have had the stronger finishing kick in distance races over their Kenyan competitors, but from the evidence of these World Championships, this no longer appears to be the case.