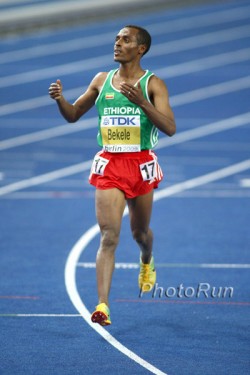 On the final day of the 12th Athletics World Championships in Berlin, Kenenisa Bekele achieved something no other athlete has achieved before: Six days after winning the 10,000 meter, the 27-year-old Ethiopian also won the 5,000m final at the Berlin Olympic Stadium, which is the first time both races have been won by the same athlete in the world championships. Additionally, Bekele was the first Ethiopian to win the 5,000m at the world championships.

In his outstanding career, Bekele has now won an incredible 24 gold medals at all world championships (including the team titles at cross championships). This makes Bekele the only athlete—apart from the Jamaican sprint super star Usain Bolt—who has won gold twice in the individual disciplines at these world championships in Berlin.

In the 5,000m final, Bekele ran a smart race, keeping up front, but ensuring the pace wasn’t too painful. True to form, he relied on his trademark late-race surge to win. But the race wasn’t an easy victory for the star Ethiopian. Due to the moderate pace throughout, twelve runners were still in the lead back when they reached the bell lap. On the back straight, Bekele finally distanced himself from the Kenyan, Eliud Kipchoge, who came in fifth overall. This left one athlete that Bekele could not shake: the defending champion, Bernard Lagat. The American ran a great race and about 50m before the finish, it looked as if Lagat would actually beat Bekele after all. But the Ethiopian countered and crossed the line first in 13:17.09 minutes—only 24 hundredths of a second ahead of Lagat. James C’Kurui (Qatar/13:17.78) came third. The best European was the British, Mo Farah, who ran 13:19.69—good for seventh.

A year ago, Kenenisa Bekele had already won both long distances at the Olympics. But winning a double at the world championships has remained elusive until now—just as it had for the other great Ethiopian runner, Haile Gebrselassie, who won silver at the 5,000m in 1993.

A historic victory for South Africa was achieved by Mbulaeni Mulaudzi in the 800m. Never before, had a male South African runner won a middle-distance race in any global championships—neither at world championships nor in the Olympics.

Mbulaeni Mulaudzi’s victory was a close one as he finished in 1:45.29 minutes. The Kenyan, Alfred Yego, was right on his heels with a 1:45.35. The bronze medalist in the 1,500m, Yusuf Saad Kamel (Bahrain), won the bronze medal with the same time as Yego.

“I had always wondered why I never win a gold medal at great championships,” Mbulaeni Mulaudzi said. The 28-year-old had been indoor world champion in 2004 but at two Olympic Games and three world championships had yet to score a gold.

A risky surge cost Spanish runner Natalia Rodriguez the gold in the women’s 1,500m final. About 200m before the finish, Rodriguez made a pass through a narrow gap on the inside lane. This tripped up the leading Gelete Burka of Ethiopia who ended up in tenth with a 4:11.21. Rodriquez crossed the line first, but was disqualified later due to the tripping incident.