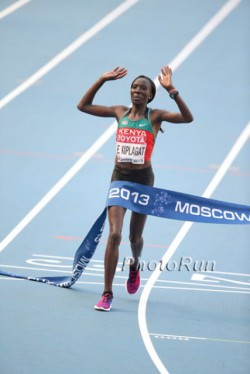 Kenya’s Edna Kiplagat defied Moscow’s 80-degree heat to become the first woman ever to retain her World Championship marathon title. But she had to overcome a surprise challenge by Italy’s Valeria Straneo, 37, who led the race until the last two kilometers and finished an upset second.

It was two years ago in Daegu, South Korea, that the Kenyan star defeated compatriots Priscah Jeptoo and Sharon Cherop in another race with challenging conditions. The only other woman to have won two World Championship gold medals in the marathon is Catherine Ndereba, also from Kenya, who triumphed in 2003 and 2007.

“I’m delighted I was able to defend my title successfully,” said Edna after the race. In an indication of the stressful conditions, Mizuki Noguchi of Japan, who overcame hot temperatures to win the 2004 Olympic title, did not finish. However, the bronze medalist on that occasion, Deena Kastor of the United States, impressed in taking ninth place in 2:36:12. “It was a hard race out there,” Deena said afterwards. “I felt like I was trying to get those negative thoughts out. It was a lot of mental work out there, from compromising from wanting a top-five finish, to a top-ten finish, to just wanting to finish altogether.” 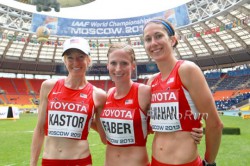 Another surprising aspect of the race was the fact that Edna Kiplagat was the only African runner in the top 12. Favorites such as the Ethiopian contingent of Olympic champion Tiki Gelana, the World Half-Marathon champion, Meseret Hailu, the Paris Marathon champion, Feysa Tadese and Meselech Melkamu, winner of the BMW Frankfurt Marathon in October, were also among those who did not finish. In fact, only 46 of 70 starters completed the race.

Valeria Straneo’s silver finish marked the first time for eight years that a European had won a medal in a World Championship marathon, held every two years. Back in 2005, the world-record holder, Paula Radcliffe of Great Britain won the world title in Helsinki with a championship record of 2:20:57 and Constantina Tomescu-Dita of Romania won the bronze behind Kenya’s Catherine Ndereba.

As this year’s race got underway, Valeria Straneo quickly took the initiative on a looped course that takes the runners along the Moskva River and past the famous Red Square landmarks of the Russian capital. She went to the front and dictated the early pace, which was fairly fast for a championship race. She passed the 10-kilometer mark in 34:12 minutes—on course for a finishing time of 2:24 hours. That—added to the heat—broke apart the field early on and soon led to the formation of a small lead group. At first this did not include the defending champion—Edna Kiplagat chose to start slower and at 10K was 29 seconds behind the leaders. However, over the next 5K the Kenyan marathoner worked her way up to the eight-strong group.

Could Valeria Straneo maintain her pace and take the gold? That was the buzz increasingly being heard from enthusiastic spectators. Yet, although the Italian runner had set a national record of 2:23:44 when she placed second in Amsterdam last year, little she had done this year hinted at the possibility of her being a contender at the World Championships. She did not even run a spring marathon: Instead she raced three half marathons. Her times were not particularly fast, but she did win the Mediterranean Games Half Marathon gold medal (1:11:00) in the Turkish coastal city of Mersin at the end of June. 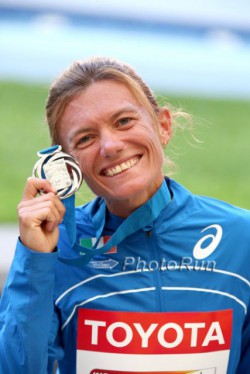 Valeria Straneo celebrates her silver medal. © www.PhotoRun.net
But Valeria Straneo still held the lead at the half way point, taking the six-strong group of Edna Kiplagat, Kayoko Fukushi, Meselech Melkamu, and the Kenyan duo of Lucy Kabuu and Valentine Kipketer, through the half in1:12:58. Then her followers began to struggle and one after another they fell behind, beginning with Valentine Kipketer and Lucy Kabuu. Kayoko Fukush fell off the pace just before 30K. And five kilometers from the finish Meselech Melkamu developed muscle problems and had to drop out of the race.

For a while it looked as if Valeria Straneo could take the victory. But it was not to be. At 40K, Edna Kiplagat finally made her move and the Italian front-runner was not able to respond. A gap between them of approximately five seconds held steady until they reached the entrance to the Luzhniki stadium—but Valeria could not make up the deficit on the track.

“At 40K I had to let Edna go because I was feeling pain in my leg muscle,” said the Italian silver medalist afterwards. She admitted modestly, “I think I was the surprise of the day. I’d never dreamed of such a success, it’s incredible. For me, the heat wasn’t so bad at all.”

Take The Magic Step’s Dieter Hogen coached Edna Kiplagat early in her career. She trains in Boulder, Colorado, and has four children, two of them adopted. Edna, who finished second in a strong field at the Virgin London Marathon in April, was honest about the conditions. “The race was tough in this heat,” she said. “The time of the race [Editor’s note: 2:00 p.m. Moscow Time] was unusual, because I’m used to my races being on a morning. So during training I adjusted the training time. I got confident I was going to win at 40K.”

The Results of the Women’s Marathon