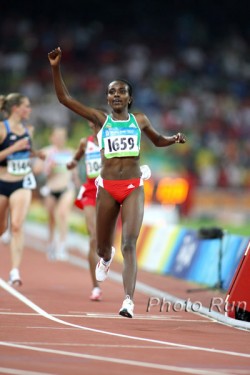 Tirunesh Dibaba set an Olympic record while winning gold in the 10,000m. © www.photorun.net

The Olympic track competition could hardly have begun in better style—about 90,000 spectators in Beijing witnessed one of the highest quality women’s 10,000m races of all time. Although the world record remained intact, never before have two women runners gone under 30 minutes in one race. In a thrilling duel, Tirunesh Dibaba (Ethiopia) ran an African and Olympic record of 29:54.66 to win her first Olympic gold.

Elvan Abeylegesse, who had led at the start of the final lap, finished second in 29:56.34. She couldn’t match Dibaba’s powerful finishing kick. But the Turk could at least console herself with setting a European record. Only the Chinese Wang Junxia in 1993 has run faster than this pair; her time of 29:21.78 remains the world record.

That wasn’t the end of the record breaking in this race. In third place was the American Shalane Flanagan, who set a national record of 30:22.22, while the Kenyan Linet Masai in fourth set a world junior record with 30:56.50. Another five personal bests were set farther back in the field in warm but just about ideal conditions in Beijing.

Lornah Kiplagat (Netherlands) set a strong pace from the start, hoping to weaken the finishing kick of her rivals. She went through 5,000m in 15:09.98, but couldn’t shake her pursuers. Although the strong pace had ensured a fast race, it didn’t bring about the success she’d hoped for—she finished eighth in 30:40.27.

Up front, Abeylegesse took over the initiative for the last third of the race, but Dibaba tracked her all the way, and once won with a strong finish. “It was a tough race and a fast race—thank God I won it,” said the Ethiopian. Flanagan in third place said: “I was so focused, I only knew I’d won bronze at the finish—I just gave it my very best.”

There were qualifying rounds in three other events on the day’s schedule. None of the leading contenders revealed any weaknesses. Looking surprisingly good was the 2005 world 1500m champion Rashid Ramzi (Bahrain), who hasn’t been much in evidence in recent years. His time of 3:32.89 was easily the fastest performance. Among others also going through to the next round without problems were the world champion Bernard Lagat (USA/3:41.98) and the Kenyan Augustine Choge (3:35.47).

Saturday sees the women’s 800m semi-finals on the schedule. The strong favorite Pamela Jelimo (Kenya) won her first round race in 2:03.18. While the world champion Janeth Jepkosgei (Kenya) qualified with an equally confident win in 1:59.72, Maria Mutola (Mozambique), the 35-year-old who won the 2000 Olympic title, ran the fastest time with 1:58.91.

The qualifying rounds for the women’s 3,000m steeplechase brought excitement, because of 51 runners in three races, only 15 qualified for the final. Gulnara Galkina-Samitova (Russia) ran unchallenged for a top-class time of 9:15.17. Her compatriots Yekaterina Volkova (9:23.06) and Tatyana Petrova (9:28.85) also reached the final in commanding style, as did the Kenyans Ruth Nyangau (9:19.75) and Eunice Jepkorir (9:21.31).