Thousands Turn Out to Celebrate Wellness at the 39th Bellin Run 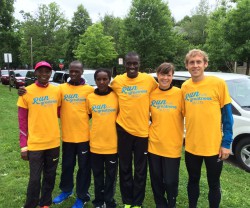 From the left: Risper Gesbwa, Allan Kiprono, Joscah Obare, Lani Kiplagat, Uta, Germany’s Oliver Hoffmann during the events in Green Bay. © Take The Magic Step
For the past 39 years, the beautiful city of Green Bay, Wisconsin has played host to one of the largest 10Ks in the United States: the annual Bellin Run.

Since its founding, this road race, which winds through the scenic streets of Wisconsin’s third-largest city, has always been about two things: celebrating wellness and supporting the community. Runners from all over the globe have toed the start line in front of the Bellin Hospital, not necessarily to run the fastest time or garner the most accolades but to simply gather on a gorgeous Saturday morning in June and encourage one another to live a healthy, happy lifestyle.

Giving back to the community has also been an important element of this race weekend. On Friday, the day before the 10K, many runners made a donation to take part in the Run with Greatness Charity Fun Run, the proceeds of which benefited two organizations: myTEAM Triumph, a non-profit that enriches the health and well-being of disabled athletes through endurance sports, and Thrive, a partnership with the Green Bay Area school district to promote healthy living for students. And Take The Magic Step’s own Uta Pippig was there as well, taking part in the 10K and supporting her fellow runners, along with fellow Boston Marathon champions Joan Benoit Samuelson, Bill Rodgers, and Meb Keflezighi. 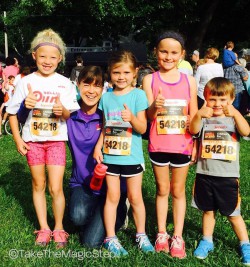 Little champions enjoyed a speedy Dick Lytie Children’s Run on Friday. © Take The Magic Step
The Bellin is an amazing two-day event that encompasses every section of the close-knit community. Friday’s program finished touchingly with the running of the Dick Lytie Children’s Run, when hundreds of youngsters from age 4 to 10 laced up their running shoes and sped half a mile around Astor Park to receive their finishing medals in front of cheering spectators and proud families.

Then this morning—Saturday—more than 16,000 runners lined up under sunny skies for the 10K. KIMbia’s Allan Kiprono of Kenya, who is coached by Take The Magic Step’s Dieter Hogen, was the overall winner and champion for the second year in a row. The 25-year-old broke the finish line tape in 29 minutes and 1 second for his fourth Bellin victory in five years.

“I love to come back to Green Bay because of the good organization and friendliness of the people,” Allan told Take The Magic Step afterwards. “They always take good care of us runners, but today we also got lucky because the conditions were really great for running. It was a bit windy but nice and cool and it was a joy to run.” 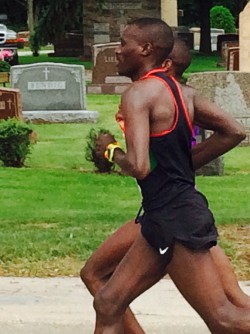 The 2015 men’s elite competition. © Take The Magic Step
Lani Rutto of Kenya, also a member of the KIMbia team, came across the finish line in second with a 29:50 clocking. Lani and Allan ran together until the final mile—until Allan found another gear and swept into the lead. The USA’s Meb Keflezighi, Olympic silver medalist and winner of both the Boston and New York City Marathons, took third in 30:06.

Kenya’s Risper Gesbwa was victorious in the women’s race in 32:50, with second and third places going to KIMbia’s Joscah Obare (Kenya, 33:04) and Kellyn Taylor (USA, 33:50) respectively.

Further back in the field, there was also plenty of courage and determination on display. Karen Sylvester, who is currently battling cancer, ran the 10K in memory of her daughter-in-law, Ellen, who passed away from the disease. “You deal with it and you have faith,” she said to WBAY.com. “You can take two roads: woe is me, or life is great, let’s enjoy it while we have the chance.”

The 10K also brought out an impressive number of Green Bay’s children. More than 1,800 youngsters from no fewer than 64 local schools turned out to celebrate this joyful festival of wellness along the beautiful streets of Green Bay. 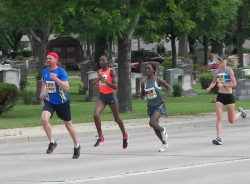 Risper Gesbwa and Joscah Obare on their way to the finish line. © Take The Magic Step
Afterwards Uta congratulated her sponsor, Krueger International, on the 2nd place in the team competition. She added, “I would like to thank the organizers, all the tireless working volunteers, and, of course, the spectators for this wonderful day and exciting race on the streets of Green Bay.

“The weather and the temperature were good for running. I saw so many friends and had such a great time enjoying all the enthusiastic crowds on the course who contributed to the fantastic atmosphere. I met the myTEAM Triumph members before the start of race to wish them good luck—and had the chance to run a little bit with my friend Billy Rodgers, which was so much fun.”