It was April 15, 1991, and Uta Pippig was running in her second Boston Marathon.

As she raced with the lead pack of women, they caught up with a man pushing a wheelchair. “He was hunched over a younger man in the chair so lovingly,” she remembers. “I was so moved that I ran over to them and for a brief moment I slowed and then gave him a reassuring tap on his shoulder.” 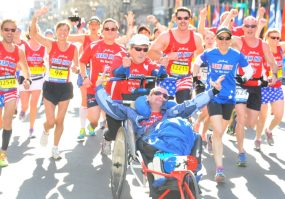 Dick and Rick Hoyt in Boston 2014. © MarathonFoto
It was Uta’s first encounter with Team Hoyt, the legendary father-and-son wheelchair racing duo, and it sparked an inspiring friendship that has seen Uta support the dynamic pair and their charity foundation for decades.

The animated man in the wheelchair, she later discovered, was Rick Hoyt, born with cerebral palsy. Pushing him was his father Dick. Together they would run in an incredible 32 Boston Marathons before Dick finally retired at 74.

After that brief encounter in 1991, Uta went on to win Boston three times. “And even when she was leading and the race was on the line she always paused to give us a hug and cheer us on,” smiled Dick, who pushed Rick to an awesome 2 hours 48:51 in one of their early Boston Marathons.

Uta was born in East Germany and had a stellar career on the world running stage after the fall of the Berlin Wall in 1989. She has movingly described her departure to the west as “running to freedom” ― the title of her forthcoming book. Her admiration for Dick and Rick comes through when she says, “Dick gave freedom to someone else ― his son Rick ― to enjoy a life that might not have been possible.”

This year ― the 123rd Boston Marathon ― health problems prevented Rick, 57, from competing with his duo partner for the last four years, Bryan Lyons.

But 24 runners came from all over the U.S. and Canada to form the latest Team Hoyt, running 26.2 miles from Hopkinton to Boston. The charity runners raised $140,000 for people with disabilities ― the mission of the Team Hoyt Foundation.

Special Stories from The Team’s 26.2 Miles

Among Team Hoyt’s Runners were two mini-teams who exemplified Dick and Rick’s trademark tradition of courage overcoming adversity. They included a man who was once told he might never walk again; and a wheelchair duo who ignored warnings that the weather was going to be so bad that maybe they should stay home this year. 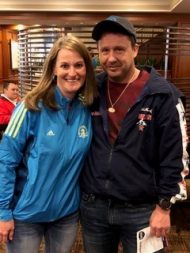 Morrie in Boston 2019. © Courtesy Morrie Ripley
Morrie Ripley was driving to a friend’s house for a barbecue near his home in Spruce Grove, Alberta, Canada, 20 years ago. It was dusk, and he didn’t see the huge moose crossing the road until it was too late. Unconscious, he was airlifted to a hospital with severe spinal injuries. He was 25, and doctors told him he might never walk again.

Feeling later began to return to his legs, but still he faced life as an “Incomplete Paraplegic” ― meaning he had limited function in all four limbs. “I’m going to run the Boston Marathon,” he told astonished doctors half-jokingly. But first he had to teach himself to walk again…then to run.

After years of gruelling rehab he finally succeeded ― but there was a catch. In very cold weather Morrie loses voluntary control of his legs and hands. “My legs shake violently, creating intense muscle spasms,” he says. “I basically lose function in my hands, too. People who don’t know me think I’m having a seizure.”

Morrie ran his sixth Boston Marathon last year, and it was cold. Very cold. Twice, Morrie found himself guided against his will into first aid tents, desperately trying to explain to worried medical staff who wanted to pull him from the race that this was normal for him and he could finish. It was not until after he crossed the finish line that he discovered a BAA rule that allows mobility-impaired runners to use a “support runner” to help them in any way “except any form of forward motion.” 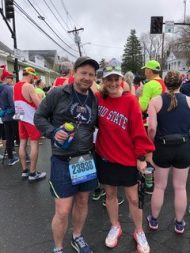 Morrie and Sadie at the starting line. © Courtesy Morrie Ripley
Fast forward a year to Marathon Day 2019 ― and Morrie had found his “support runner”. He was joined on the start line by Sadie Briggs, 43, a friend from McKinney, Texas, who co-founded Team Hoyt Texas. This year it was chilly, again, and rainy, and Morrie soon needed her. “I tripped and fell a couple times, and this attracted the medical people quickly,” says the 44-year-old father-of-three ruefully. “My legs spasmed big time, but with Sadie at my side to explain things to the medics, my downtime was minimal. She also helped me with things I had difficulty with because of the limited function of my hands. Like taking my water bottle cap off, unzipping my fuel belts, opening gels and the food fuel I needed to eat.”

Sadie told TakeTheMagicStep: “I’m an ultra runner and an Ironman and thought I truly knew the meaning of grit and fight. The truth is, I didn’t. I didn’t have a clue.”

“Morrie demonstrated that to me this year. He had taken two hard falls, his hands were curling in and his ankle felt like it was on fire with every step he took. But he would somehow regain his stance and control of his muscles and start running again. I could not have been more proud to be next to anyone that day. Morrie could have quit, could have gone to the medical tent to have his scrapes cleaned and bandaged, but he didn’t. He raced to that finish with a purpose and drive that I will never forget.”

She added: “We had friends along mile 25 who were chanting, ‘Morrie…Morrie…’ And after 25 miles of hills, rain and then heat and two falls, I saw he was still smiling. Morrie finds joy in this sport. It isn’t just about running 26.2 miles ― it is why he is running 26.2 miles. Because he can ― and he never takes that for granted.”

They finished in 4 hours 55:11 ― and they are already planning for next year.

A Fast Run by “Team in The Nick of Time” 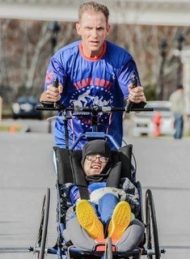 “Team in The Nick of Time” © Courtesy Ted Painter
So concerned were the race organizers of the Boston Marathon that this year’s weather would be as challenging as 2018’s that they sent alerts to all the wheelchair duos. “They were encouraging us to drop out, with the promise of having our slots honored in 2020,” says Team Hoyt Runner Ted Painter, who pushes Nick Draper’s wheelchair to form “Team in The Nick of Time.”

Nick, 30, who lives in Spencer, Massachusetts, was born with a rare condition that impairs motor function development. Ted, 47, has been pushing his racing chair for six years in numerous marathons and triathlons.

Their response to the invitation to sit it out this year was immediate and to the point. “Hell, they (the Boston organizers) don’t know us very well,” says Ted. “Nick and I have run and trained in every conceivable kind of crappy weather. Nick has never bailed out of a race or even a training run, and I would never conceive of leaving him without the legs he needs to participate in the Boston marathon.” 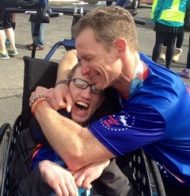 At the finish line… © Ted Painter
Their decision to stay in the race paid off: while there was rain and wind, the weather wasn’t as bad as forecast. Wearing the Team Hoyt colors, they crossed the finish line under their target of three hours in a PR 2 hours 54:47.

Back to that touching chance encounter on the Boston Marathon course 18 years ago. Dick and Rick Hoyt won Uta’s heart that day. And on Marathon Day 2019, just as she has done for many years, she was at the finish line with Dick to congratulate Team members as they completed their marathon. “It’s about love and joy and helping others ― and the freedom of running,” said Uta.