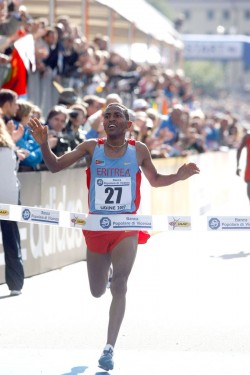 Zersenay Tadese of Eritrea and Mary Keitany of Kenya won gold medals at the World Half-Marathon Championships in Birmingham, England last Saturday. The 27-year-old Tadese ran 59:35 minutes and Keitany, also 27, won her first major title with a 66:36. Keitany’s time also broke the African record, making her the second-fastest woman of all time in the half-marathon.

Tadese completed a unique achievement at the championships in Birmingham, since the runner-up in the World Championships 10,000 meters in Berlin won the gold medal for the fourth occasion. In 2006 the championship was held over 20 kilometers rather than the half-marathon distance.

“It was a tough race, the competition was strong and the wind didn’t make it any easier,” said Tadese afterwards. In the race, he took the lead with 10K to go. His biggest pre-race rival, Sammy Kitwara of Kenya, finished in tenth place in 61:59. However, second place still went to another Kenyan, Bernard Kipyego, who won a thrilling sprint for the line to beat the surprisingly strong American, Dathan Ritzenhein, by just one second in 59:59. Kipyego’s first half-marathon was only in April where he won against a strong field in Berlin. The 23-year-old ran 59:34 on that debut before improving to 59:10 in Rotterdam. Ritzenhein’s 60:00 was the second-fastest half-marathon ever run by an American and the first medal for the United States at the World Half-Marathon Championships. 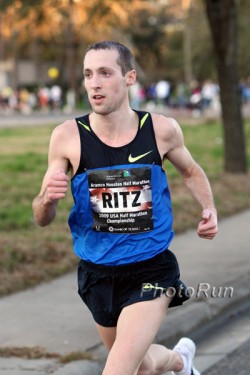 Dathan Ritzenhein ran the second-fastest American half-marathon in Birmingham—good for a medal as well. © www.photorun.net

The biggest surprise in Birmingham came from the women’s winner, Mary Keitany. Two years ago at the World Half-Marathon Championships in Udine, she celebrated her greatest success to-date. She finished second on that occasion behind her former compatriot Lornah Kiplagat (Netherlands) who set the still-current world record of 66:25. In Birmingham, Mary Keitany missed the world record by only eleven seconds, becoming the second-fastest woman ever for the half-marathon.

Keitany’s result is even more impressive given the fact that she hardly had the best preparation the day before the race. The Kenyan spent at least an hour trapped in an elevator, which she had taken to reach the press conference. “Of course that had an effect on me. I thought I would faint, it was very hot in the elevator and we were all sweating,” she said, relating the claustrophobic experience, which she shared with two other runners Sammy Kitwara and Dathan Ritzenhein who were in the elevator with her.

Mary Keitany ran a very strong race. After having gone through 10K in a blistering 31:04, Keitany broke away from her rival, the Ethiopian Aberu Kebede. The next split time, 15K in 46:51, would have been a world record had the course not exceeded the allowable IAAF descent. By that time, Keitany had a 40-second lead over Kebede.

The contest for second resulted in a thrilling sprint finish between Kebede and Kenyan Philes Ongori. Ongori prevailed with a 67:38; Kebede finished a second behind. Caroline Kilel (Kenya/68:16), the Ethiopian pair of Metawet Tufa (69:11) and Tirfi Tsegaye (69:24) were the next runners finish.

Over 5,000 Runners at the Boston Half-Marathon

It was a successful day all round for the Half-Marathon in Boston on Sunday with 5,364 runners entered for a race that wound through the historical parts of the city. The men’s title was up for grabs until the final 100 meters when the Irishman Martin Fagan broke away from the KIMbia-Group member Philemon Terer from Kenya (62:24), winning in 62:21. Fagan missed the course record held by Tom Nyariki (Kenya) by just one second. The fastest woman in Boston was the Ethiopian Belainesh Gebre in 71:07. Jilliah Tingea, also part of the KIMbia-Team, finished second in 71:42.