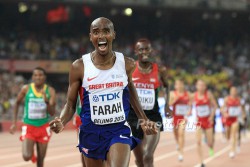 Mo Farah celebrates in the Beijing Stadium, known as “The Bird’s Nest.” © www.PhotoRun.net

The World Athletics Championships in Beijing, China, saw historic performances, exciting finishes, and major surprises in the long-distance events. Into the history books went Britain’s Mo Farah, 32, who achieved yet another “double” in the 5,000 and 10,000m; and teenager Ghirmay Ghebreslassie of Eritrea, who became, at age 19, the youngest men’s marathon world champion ever.

Take The Magic Step presents this round-up of the distance races and congratulates everyone involved in Beijing for a fantastic World Championships that made for thrilling viewing on the internet and on television! 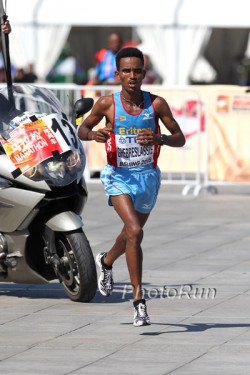 The Championships began with a surprise on August 22 when teenager Ghirmay Ghebreslassie from Eritrea conquered scorching heat—83 degrees Fahrenheit by the finish—to become the new marathon champion. At just 19, he won his first 26.2-mile victory in 2:12:28, ahead of Yemane Tsegay of Ethiopia (2:13:08) and Munyo Mutai of Uganda (2:13:30). Italy’s Ruggero Pertile put on a great showing to finish fourth in 2:14:23. Apart from perhaps Yemane Tsegay, none of the top four runners had been expected to figure so prominently in a race that illustrated the unpredictable nature of world-championship events.

Ghirmay Ghebreslassie took the lead at the 35-kilometer mark, by which point the world-record holder, Dennis Kimetto, and his Kenyan fellow countryman Wilson Kipsang, had already dropped out. The defending champion and Olympic gold medalist Stephen Kiprotich could finish no higher than sixth in 2:14:43 behind Shumi Dechasa of Bahrain (2:14:36). Lelisa Desisa of Ethiopia, the current Boston Marathon champion, placed seventh in 2:14:54. After the race, Ghirmay, the youngest-ever winner of the marathon world title said happily, “This is the first gold medal in the marathon at the World Championships in the history of Eritrea’s track and field so it’s naturally a very special moment for me.”

Women’s Marathon: A First for Ethiopia Thanks to Mare Dibaba 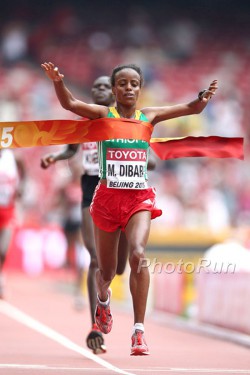 In much cooler conditions a week later, the women’s marathon came down to a dramatic sprint finish, with Mare Dibaba of Ethiopia clinching victory over Kenyan rival Helah Kiprop by a single second. Mare, 25, took the gold medal in 2:27:35 for the narrowest margin of victory ever at the world championships.

Mare’s triumph was doubly sweet: not only did she record one of the biggest victories of her career, she also became the first Ethiopian woman to win World Championships marathon gold. “I’ve waited a long time for this and only increased the pace right at the end,” she said afterwards. 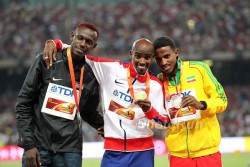 Mo is now one of only three runners—the others are Ethiopia’s Haile Gebrselassie and Kenenisa Bekele—to repeat a 10,000-meter title at successive World Championships. Haile and Kenenisa have each won the world title on four occasions.

But that was just the start for the amazing Londoner. He took to the track a few days later in the 5,000 meters—and did it again. His dominating victory gave him a place in the track and field history books: the first man ever to retain both long-distance titles. What is more, it was his third consecutive 5,000m victory at the World Championships. Mo controlled a tactical race to win in 13:50.38 from Caleb Ndiku of Kenya (13:51.75) and Hagos Gebrhiwet of Ethiopia (13:51.86). “This double win means everything to me—it’s incredible,” he said. “I feel great and am so happy.” 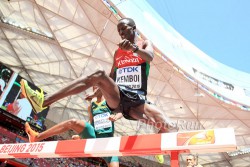 Another major milestone was passed in the men’s 3,000m steeplechase, as Kenya’s Ezekiel Kemboi became world champion for the fourth time in a row. The 33-year-old ran a very fast last lap to leave two of his compatriots trailing. Ezekiel won in 8:11.28, followed by Conseslus Kipruto (8:12.38) and Brimin Kipruto (8:12.54).

In the 5,000m, 23-year-old Almaz Ayana of Ethiopia set a new championship record, finishing in 14:26.83, ahead of fellow countrywoman Senberi Teferi (14:44.07). Genzebe Dibaba, who had won the 1,500m title in commanding style earlier in the week, completed an impressive Ethiopian sweep, taking the Bronze in 14:44.14. 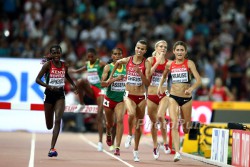 There was a nail-biting finish in the women’s 3,000m steeplechase, with Kenya’s Hyvin Jepkemoi claiming the Gold in 9:19.11, just ahead of Habiba Ghribi of Tunisia who finished in 9:19.24. Germany’s Gesa Felicitas Krause, 23, ran the race of her life to take the Bronze in 9:19.25, a personal best. She was the only German woman entered in the long-distance events in Beijing and became the first ever from her country to win a medal in the 3,000m steeplechase. “I’m overjoyed of course,” she told the German ZDF television network afterwards. “You dream of moments like these when you’re going through tough training.”

So another World Championships have delighted running fans around the world. Perhaps they have inspired you to lace up your running shoes and want to take part in a road race to experience the thrilling atmosphere of competition yourself. If so, Uta’s “Run Your First 5K” six-week training plan for beginning runners can be your guide. We here at Take The Magic Step are cheering for you and wish you all the best!