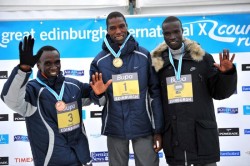 The extreme winter conditions in Europe took their toll on running. The traditional Egmond Half Marathon in the Netherlands, where part of the course runs along the beach, had to be called off at the last minute since the organizers could not guarantee the runners’ safety. In contrast, the Bupa Great Edinburgh Cross Country run was held as planned. This cross-country race in Scotland (Great Britain) had one of the strongest fields of the season. The race, held in icy conditions, produced a surprise: Kenenisa Bekele (Ethiopia), the world’s best cross-country runner for many years and the clear favorite, ended up placing fourth.

Bekele had won the Edinburgh race three times in the past (2006-2008) but on this occasion a trio of Kenyans outran him. Joseph Ebuya came through to win on the tough 9-kilometer course in Edinburgh’s Holyrood Park in 28:41 minutes.

Ebuya’s life story is amazing. Too poor to go to school, he was forced to stay home and work on his family’s farm. Seeing such Kenyan greats as John Kibowen, Benjamin Limo, and Charles Kamathi in training, Joseph Ebuya decided to try his hand at running in 2003. Lacking training shoes and decent workout gear, Ebuya completed his first run in leather shoes and jeans. With his income from running, Ebuya bought land for his family at home in Kenya. “I want to change their lives,” he was quoted in an IAAF report from 2008. 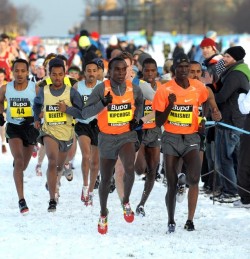 Saturday’s race was only the third time in his career that Kenenisa Bekele had been beaten in a cross-country race. “I arrived as early as Thursday because I wanted to visit the Olympic site in London. I would usually only arrive the day before the race so I missed a couple of training sessions,” explained the Ethiopian following his first competition since September 2009.