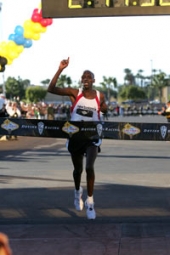 Stephen Kiogora has won the New Las Vegas Marathon today (Sunday, 4th December), celebrating the biggest success of his career so far. The 31-year-old KIMbia runner from Kenya clocked 2:11:56 hours. On the famous Las Vegas Strip Stephen Kiogora left behind his nearest rival by more than a minute. It was his first win in his fifth marathon. Additionally, the Kenyan also won ‘The Challenge’ in Las Vegas. The women got a head start of 14:40 minutes, but it was Stephen Kiogora who broke the tape first.

The biggest triumph as a runner came along with the biggest payday in Stephen Kiogora’s life. Besides a $ 50,000 first prize he collected another 50,000$ for winning ‘The Challenge.’ “With the wind, I knew that it would be a tactical race, and I raced according to our training,” Stephen Kiogora said to ,Running USA Wire.’

Stephen Kiogora had prepared for the New Las Vegas Marathon in Boulder (Colorado) together with his KIMbia team mates under the guidance of coach Dieter Hogen. In the past he had already shown his potential in the marathon. In last year’s hot BAA Boston Marathon Stephen Kiogora had finished fourth and he was runner up in the Coke Zero Rock & Roll Marathon 2005.

In cold and windy conditions the race was started at 6 am. After a slow first half of 68:26 minutes the pace was picked up. Stephen Kiogora then covered the second half in much faster 63:30 minutes, showing his capability. Between 17 and 18 miles the men’s leading group caught the leading women and ‘The Challenge’ was decided in favor of the men. Stephen Kiogora and Titus Munji, who is the seventh fastest marathon runner ever with a personal best of 2:06:16, then surged away from the rest of the group. It was after about 24 miles when Stephen Kiogora left behind his last rival: Titus Munji then finished second with 2:13:19. Ethiopia’s Tekeste Kebede took third place in 2:14:36.

In contrast to the men’s race the women’s race was decided in the final 150 meters. After a thrilling sprint the first three crossed the line within one second. Adriana Fernandez (Mexico) won the race with 2:31:54. “Until the very last meter I was not sure if I would win today,” Adriana Fernandez said. Second placed Galina Bogomolova (Russia) was given the same time as Fernandez while third placed Dorota Gruca (Poland) clocked 2:31:55.