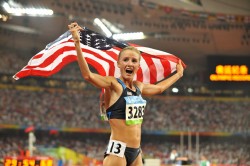 Shalane Flanagan was a surprise bronze medalist in the 10,000m. © www.photorun.net

Shalane Flanagan’s time of 30:22.22 in her tremendous contest with Africa’s best women distance runners set not only a U.S. but also a North American record. She had set the previous American record of 30:34.49 earlier this year. Flanagan now stands 13th on the women’s all-time list for the distance. After her triumphant run Flanagan looked back on the race.

What were your expectations going into the race?

Shalane Flanagan: Whenever I stand on the start line, I want to win—gold, silver or bronze, I always want to be there, up front. I was so focused on my race and gave everything that when I first crossed the line I didn’t know I was third. If I had known that earlier, I would have probably gone crazy. But I was so happy about the way I ran so strongly in the race.

Has it really dawned on you that you’ve won the bronze?

Shalane: I always believed I could do it, so I can take it in to some extent. But I won’t really believe it until I have the medal hanging round my neck!
[The medal ceremony didn’t take place until the following day.]

There was a period in the race when you were running some way behind the leading group of five. Did you still think you could get a medal then?

Shalane: In the final I never thought about medals at all. I simply ran my own race, did my best and tried to stay calm. I was always hoping I could reel in one or two of them.

Did you know you were on course for a record?

Shalane: No, because I wasn’t looking at the split times. I knew we were running very fast, but I was just concentrating on doing my best.

Whom do you have to thank for your success today?

Shalane: My coach [John Cook], because he prepared me well and told me that this was a race like any other so I didn’t get too worked up about it. I had complete confidence in my training.

What does this success mean for you?

Shalane: It’s an honor for me and for the U.S. team to have won an Olympic medal. Deena Kastor was an inspiration for me, she showed in Athens what was possible. I hope that I, in turn, can now inspire others—above all, of course, young people. I want to show by my performance that anything is possible.

The 5,000m has so far been your favorite distance. Does the result today change that?

Shalane: I’m not so sure about that, but I really do prefer the shorter distances.