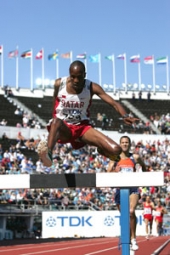 Saif Saaeed Shaheen defended his 3,000-meter-steeplechase title at the World Athletics Championships in Helsinki. This final, as most of the competitions yesterday evening, turned out to be a water battle. Due to the heavy rain, the water jump was flooded minutes before the race started.

Qatar’s Shaheen, who had been a Kenyan until he changed his name and nationality two years ago, had once again the best kick in the end and finished with 8:13.31 minutes. Second was Olympic champion Ezekiel Kemboi (Kenya/8:14.95), who probably only was able to win gold in Athens because Shaheen wasn’t allowed to compete there. The Kenyan Brimin Kirputo was sprinting into the finish in 8:15.30 minutes for third place, denying Morocco’s Brahim Boulami (8:15.32) a medal.

The steeplechase race was not at all spectacular in the first two thirds. Quite different from that one in the Paris World Championships final where Shaheen won against Ezekiel Kemboi. “This race was much easier than the one in Paris. I have tried another tactic and it worked out well,” explained Saif Saaeed Shaheen, who increased the pace just 600m before the finish line. The Kenyans were without a chance against his final sprint.

In contrast to the steeplechase race the 800m final of the women ended with a big surprise. There were three Russians, who were the favorites. But the trio chose the wrong tactic—or there was no tactic. The race was run way too slow, clocking 60.72 seconds for 400m. The competitors were still running all together in the last lap. The final sprint was then surprisingly won by the 25-year-old Cuban Zulia Calatayud. Temporarily she was running next to the Russian Tatyana Andrianova (1:59.60) who finished third. But then she got past her and won in 1:58.82 minutes. Second was Hasna Benhassi (Morocco) in 1:59.42.

“I knew that the race would be slow and I wanted to have a good position for the sprint. That worked out very well,” said Zulia Calatayud. She was already two times in an Olympic final, but never placed better than sixth.