Sergiy Lebid Shines for the Eighth Time in Brussels 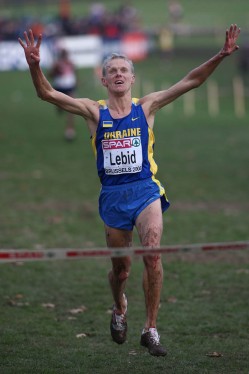 Sergiy Lebid retained the European Cross Country Championship title for another season. In Brussels’ Parc de Laeken on Sunday, the Ukrainian won the championships for the eighth time. He now owns more than half the individual titles in the event’s 15-year history! It’s also worth noting that Lebid has run every year that the championships have been held. In an exciting women’s race, the Kenyan-born Hilda Kibet, representing the Netherlands, triumphed for the first time.

In the men’s 10 kilometer race, the dynamic changed when the Swedish steeplechase runner, Mustafa Mohamed, made a move and surged ahead after the 5K mark. Around nine runners comprised the lead pack at that point as they bounded up the muddy, uphill section of the race. Then, Britain’s Mo Farah (who had won the European Cross Country Title two years ago, breaking Lebid’s string of victories) took the lead with two laps to go. Ayad Lamdassem, born in Ethiopia but a newly naturalized Spanish citizen, tried to stick with Farah. Mustafa Mohamed and Sergiy Lebid trailed a few meter behind.

“There were three of us up front and I couldn’t see Lebid so I thought we could have a chance of beating him—but he came back,” recalled Mo Farah afterwards. Demonstrating his trademark perseverance and strength, Lebid worked his way back from fourth place to the front. He was behind Farah when he went into the last 1500m lap. Approximately 600m from the finish, Sergiy Lebid attacked and broke free on a short uphill section. The Ukrainian finished in 30:49 minutes—eight seconds ahead of Farah. Mustafa Mohamed was third in 31:13, followed by Ayad Lamdassem (31:17) and the surprisingly strong Belgian Pieter Desmet (31:19).

“I knew I had to [finish him] to have a chance, that’s why I went to the front. But when he caught up with me and then went clear so quickly, that was that. I wanted to win, that’s why I’m disappointed now, but also [am] happy at the same time with a silver medal,” explained Mo Farah. With a smile, he added: “Sergiy keeps coming back and is extremely strong. But I hope this was his last European Cross Country Championship!”

The Ukrainian has other ideas. “The European Cross Country Championship is my event. Of course, I’ll be back next year and I’ll win again,” said Sergiy Lebid, confidently. But he also admitted that it was his toughest. “Mo Farah really made it hard for me. But I love cross country and my experience perhaps helped me today. I concentrated everything on the last two laps,” said Lebid. Now 33, the Ukrainian champ has yet to decide whether or not he will run the World Cross Country Championships next March. 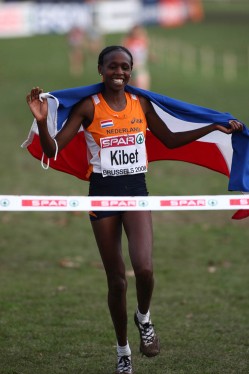 In the women’s race, Hilda Kibet, who became a Dutch citizen over a year ago, won her first European Cross Country Championship title. The star of the 8K women’s race, Gulnara Galkina, took the lead in the early stages. But after two of the six laps, the Russian Olympic steeplechase champion gave up the lead. The world record holder for the 3000m steeplechase, Galkina eventually finished in 28:40—good for 12th place.

Halfway through the race, the Portuguese runner, Jessica Augusto, and the Irish runner, Mary Cullen, shared the lead. Hilda Kibet trailed slightly, creating a small gap between them and the rest of the field. The decisive moment came during the fourth lap when Kibet surged into the lead. She slipped and momentarily lost her balance on a muddy turn, allowing Jessica Augusto to close the gap to a few meters. But when Kibet found her rhythm again, no one could catch her. She went into the final lap with a lead of around 30 meters and crossed the line in 27:45. Jessica Augusto won the silver medal (27:54). Third place went to another member of the Portuguese squad: Ines Monteiro (28:02). Mary Cullen finished fourth in 28:04.

“I pushed the pace two laps from the finish because I didn’t want it to come down to a sprint finish against the steeplechasers,” said Hilda Kibet, referring to the Portuguese duo of Augusto and Monteiro. Kibet will run the Egmond Half-Marathon in January before preparing for a spring marathon.

“I feel [that] I’m the winner, because I was the fastest European,” Jessica Augusto said, referring to the Kenyan origins of Hilda Kibet. “I’m certainly delighted with the silver medal, because it’s my first medal of any kind.”

The team performance of Great Britain is also worth highlighting. In all six races their runners achieved team medals. Among these were three golds, one silver and two bronze. Steph Twell, just 19 years old, won the Junior title for the third time. She is already being compared to Paula Radcliffe and is sure to be someone to watch in the 2012 Olympics.

The Honolulu Marathon, which attracted around 23,000 runners on Sunday, was once again a Kenyan affair. Patrick Ivuti won in 2:14:35 hours. Two other Kenyans, Stephen Kinuyanjui (2:17:41) and Pius Mutuku (2:17:51), placed second and third respectively. Rain affected the early stages of the race before Patrick Ivuti, winner of the 2007 Chicago Marathon in a dramatic sprint finish, took the lead around halfway. At the finish, the 30-year-old was ahead of his rivals by over three minutes. Ivuti’s brother-in-law, Jimmy Muindi, who has won Honolulu six times and is the course record holder with 2:11:12, took fifth place in 2:21:43.