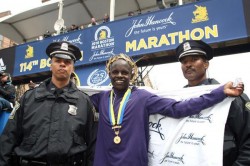 The Boston Marathon, the world’s oldest annual marathon, is always a special race filled with suspense, joy, and triumph. This year’s 114th running was no exception. In front of thousands of spectators who lined the point-to-point course from Hopkinton to Boston on Monday 21-year-old Robert Kiprono Cheruiyot of Kenya won the men’s race in 2:05:52 hours: a new course record. The previous record, 2:07:14, was held by Robert Kipkoech Cheruiyot (no relation to Robert Kiprono Cheruiyot) who set it in 2006. The women’s race went to Teyba Erkesso of Ethiopia who won in 2:26:11. In the men’s wheelchair division Ernst Van Dyk of South Africa won his ninth Boston Marathon in 1:26:53, while in the women’s division Wakako Tsuchida of Japan took first in 1:43:52. Continuing the run of impressive KIMbia finishes this year James Koskei of Kenya won the master’s division in 2:17:28.

Over 23,000 runners from 79 countries took part in Monday’s historical race. Among them were about 9,772 female participants, which is an all-time record. This year also marked the 25th anniversary of the race with John Hancock Financial as its primary sponsor.

The starting gun for the women’s race went off at 9:32 am. With winds at just 2 mph and temperatures in the 50s, the women went out faster than they did last year. Yurika Nakamura of Japan moved to the front of a large pack and set the pace on the early downhill sections of the course. By 10 kilometers (35:06), the wind picked up and the pack began to slow down. Nakamura maintained a very small lead with six runners in tow.

Ten miles into the race, the dynamic changed with the group thinning to just three runners, all Ethiopians: last year’s second place finisher Dire Tune, Koren Yal, and Teyba Erkesso. The Ethiopian trio put on a strong surge and gapped the pack by nearly 50 meters.

The three ran together for several miles. As they reached the half-marathon point (1:14:52), Dire Tune was the first to drop back. Fourteen minutes later, it was Koren Yal’s turn, leaving Teyba Erkesso as the clear favorite to win the race. For the remaining seven miles, it was Erkesso’s race to lose. Her head bobbing slightly, her legs splayed, Erkesso ran in the lead with no one in sight behind her. Things looked easy for her. 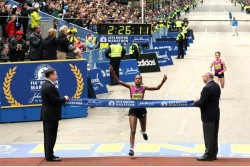 But in the remaining six miles, Teyba Erkesso’s victory was not as assured as originally thought. Closing the gap slowly was Tatyana Pushkareva. The 24-year-old Russian picked up her pace for the remaining miles. At mile 21, her gap was 22 seconds. By mile 23, it was down to 16 seconds, and as Erkesso made the last turn onto Boylston Street, she led by a mere 8 seconds. Erkesso heard Pushkareva behind her and put on a final, desperate surge, opening her stride. Both hands in the air, she broke the tape and fell to her knees with an enormous smile on her face. Tatyana Pushkareva was second in 2:26:14, just five seconds behind Teyba Erkesso. Last year’s champion, Salina Kosgei of Kenya, took third in 2:28:35.

“The course is good—up and down. The weather is good today. From the beginning, I didn’t accept that I could win the race. I didn’t accept it until I crossed the finish line,” an elated Erkesso recalled in the press conference after the race.

The men’s race wasn’t as close as the women’s, but it still had its share of decisive moments. Using the same tactics as he did last year, Ryan Hall of the United States took an early lead and pushed the pace from the front with a 4:52 opening mile. His second mile was even faster (4:48 minutes). A large pack trailed behind. Hall held the lead at the 5K point (14:33). By 10K, Hall dropped back, letting last year’s champion, Deriba Merga of Ethiopia and Robert Kiprono Cheriuyot (Kenya) do the heavy lifting. The race remained relatively uneventful until the 9-mile mark. At that point, Ethiopians Merga and Hala Dechase made the first big move of the race, clocking a blazing 4:34 mile. None of the other runners countered. But by the 11th mile, the pack had reeled them in.

Trailing 15 seconds behind the leaders, Ryan Hall made a comeback in the 12th mile and was able to regain the overall lead through the half, which was crossed in 1:03:24. At this point in the race, runners began to drop back. The pack of eight thinned to just five: Deriba Merga, Robert Kiprono Cheruiyot, Meb Keflezighi of the United States, Abderrahim Goumri of Morrocco, and Moses Kigen Kipkosgei of Kenya. 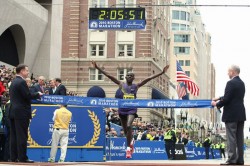 As the four Newton Hills approached, the pack thinned further until by the 35K mark (1:29:58), it was down to just Robert Kiprono Cheruiyot and Deriba Merga. The two ran side by side up and down Heartbreak Hill. It was anyone’s race all the way until the 22nd mile, when Cheruiyot seized the lead from Merga and began to widen the gap. He ran the next several miles alone with no Merga in sight. By mile 24, the win was clearly his and it just came down to how much of an improvement he would make over the six-year-old course record. Hands raised and index fingers pointing up, Robert Kiprono Cheruiyot broke the tape in an astonishing 2:05:52—over a minute faster than the Robert Kipkoech Cheruiyot’s four-year-old record. Finishing second was Tekeste Kebede of Ethiopia (2:07:23). Last year’s champion, Deriba Merga placed third in 2:08:39. Also worth mentioning is Ryan Hall’s fourth place finish in 2:08:41, which was the fastest time ever run on the Boston course by an American.

Asked about his race afterwards, Cheruiyot replied, “At 22K I found wind, but wind is not a problem. The problem was my hamstring, but I finished in a good time.”