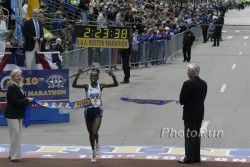 The Kenyans Robert Cheruiyot and Rita Jeptoo won the 110th BAA Boston Marathon. In good weather conditions 22,517 athletes participated in the race which has a point-to-point course from Hopkinton to Boston. The BAA Boston Marathon was also the premiere of the new World Marathon Majors Series (WMM). Robert Cheruiyot won with a new course record of 2:07:14 hours ahead of his countryman Benjamin Maiyo (2:08:21) and US American Meb Keflezighi (2:09:56). Rita Jeptoo won in 2:23:38 hours ahead of Jelena Prokopcuka (Latvia/2:23:48) and Japanese Reiko Tosa (2:24:11).

Both winners collected 25 points each in this race. At the end, the WMM Series offers a total grand-prize jackpot of one million US-Dollar. Athletes earn points by placing among the top five at qualifying races of the WMM. The first series ends in November 2007 in New York City. The male and female runner with the highest score out of a maximum of four races will be awarded at the end of each scoring period with half of the one million US-Dollar jackpot.

Besides the BAA-Boston Marathon the Flora London Marathon, the real,- Berlin Marathon, the LaSalle Bank Chicago Marathon and the ING New York City Marathon form the World Marathon Majors Series. In the men’s race the pace was cautious in the beginning although the course slightly drops in its first few kilometers. 5K were reached in 15:22 minutes. But then the race got much faster. John Yuda (Tanzania) and the Boston winner of 2004, Timothy Cherigat (Kenya), led the leading group in 30:06 through 10K.

Before 15K was reached in 44:51 last year’s champion had lost contact: For Hailu Negussie (Ethiopia) the venture to defend his title became a hopeless one.

Three runners broke away after 10 miles: Benjamin Maiyo, who finished as runner-up in Chicago in October 2005, Deriba Merga (Ethiopia) and Meb Keflezighi, the US American runner-up at the 2004 Olympics marathon.

It was Maiyo, who increased the pace and reached 20K in 59:32 minutes, the half marathon point in 62:44 and 25K in 1:14:22. At this point he was leading but from behind someone approached continuously: Robert Cheruiyot. At 30K (1:29:31) the Boston winner of 2003 reached Maiyo, while Meb Keflezighi’s dream did not come true. He wanted to win the Boston Marathon and become the first American to do so since Gregory Meyer back in 1983. But he increasingly lost ground.

Ahead of 35K Robert Cheruiyot got away from Benjamin Maiyo in a hilly section of the Boston Marathon. „I learned in the past that you can’t win a Boston Marathon from the front—it is better if you run a tactical race in a group and then attack from behind,” explained Robert Cheruiyot. The 31 year-old improved the twelve year-old course record of his countryman Cosmas Ndeti by exactly one second. „I still hoped to win the race when Robert Cheruiyot broke away from me. I felt good. I thought that I would get closer again at the end of the race,” said Benjamin Maiyo, who finally finished second in 2:08:21. It was a big surprise that the next three finishers behind the two Kenyans came all from the US: Behind Meb Keflezighi who finished third Brian Sell (2:10:55) and Alan Culpepper (2:11:02) took the next places.

In the women’s race the pace was more consistent. After splits at 10K (34:07 minutes) and 15K (51:15) the leading group of eight runners reached half marathon mark in 1:12:19 hours. The leading group was halved at 30K (1:43:09). Now the Italian Bruno Genovese, who finished fourth at the end in 2:25:28, led ahead of Rita Jeptoo, Reiko Tosa and Jelena Prokopcuka. The Italian fell back first, then Tosa couldn’t keep up anymore.

Finally 25 year-old Kenyan Rita Jeptoo broke away from Jelena Prokopcuka, winner of the last year’s ING New York City Marathon, with five kilometers to go to the finish line. It was the biggest triumph in Rita Jeptoo’s career. For her victory in Boston she earned a bonus of $ 100,000. Robert Cheruiyot won an additional $ 25,000 for breaking the course record.