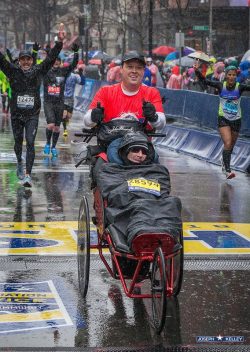 Bryan Lyons and Rick Hoyt had reached Mile 7 of the 122nd Boston Marathon, with the temperature in the 30s and a bitter headwind driving torrential rain sideways. The forecasts were predicting that the weather would deteriorate even more before the runners got to Boston. Some were already dropping out.

Bryan, piloting the Team Hoyt racing chair―and Rick Hoyt riding in it―were experiencing the worst conditions the wheelchair duo had ever faced. Then suddenly it got even tougher: sleet-like pellets peppered Bryan’s face as a huge gust of wind blew the chair almost out of his control and over to the side of the road.

“I stopped and looked at Rick and his face was cold and wet, and the rain was bouncing off his jacket, but when I asked him if he was comfortable going on, he moved his head emphatically three times: yes, yes, yes!” Bryan told TakeTheMagicStep.com. “Then a big smile lit up his face. The race was a test―mentally, physically and emotionally―but that smile carried us the rest of the way.”

Rick, 56, was born with cerebral palsy. He and his father, Dick Hoyt, guiding Rick’s wheelchair, completed 32 Boston Marathons, and ran long distance races and triathlons around the world. The father-son team, which became known as Team Hoyt, were celebrated for their love of each other and their gritty determination. When Dick retired from marathons at age 74, Bryan, a 48-year-old dentist, took over as the runner behind the Team Hoyt racing chair. This year’s Boston Marathon was his and Rick’s fourth together.

Challenges On and Off the Course 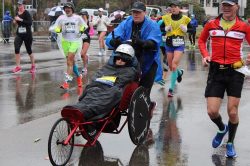 Team Hoyt had already surmounted a number of problems before standing at the starting line in Hopkinton. Last summer Rick was hospitalized with aspiration pneumonia that left him having to be permanently fed through a tube in his stomach. In October they won acceptance to the Ironman Triathlon World Championships in Kona, Hawaii. But during the race a bike malfunction caused them to miss the time cut-off by just a few minutes after cycling for 112 miles. Yet three weeks later they bounced back with an acclaimed four hours and thirty-five minute finish in the New York City Marathon.

Now, they faced driving rain punctuated by occasional false hope-inspiring lulls in the wind. “Next minute the rain would come at us sideways in torrents,” said Bryan. But, fired up by Rick’s irrepressible smile, Bryan was optimistic they could make it despite the atrocious conditions. At least, he thought, Rick was well bundled up in a fleece and water-repellant wrap and jacket, and his seat was heated―even if it did add 25 pounds to the weight of the chair.

Encouragement from a Marathon Champion and Team Members

When the pack of elite women passed them, Desiree Linden, who would later leave everyone behind to become the first American woman to win Boston in 33 years, raised their spirits when she called out words of encouragement. For a while they ran alongside Carlos Arredondo, who became a friend of Bryan’s after emerging as one of the heroes of the 2013 Boston Marathon tragedy. 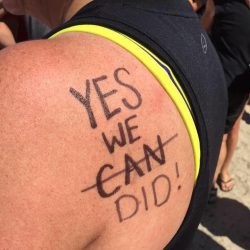 And there was fresh inspiration when they reached the Team Hoyt aid station, manned by 14 former Team members, at the top of Heartbreak Hill. “They’d come from all over the country to support the team and they’d been in a rickety tent with no heating for at least five hours,” said Bryan. “They had seen several Team runners pulled off the course by medical teams because they were suffering from hypothermia, yet they couldn’t have been more upbeat. We stayed for a few minutes, then I said to Rick, ‘let’s get this done.’ He nodded, yes. And we trudged on for the last six miles.”

At the top of Boylston Street, Bryan, who was celebrating a 10th Boston Marathon as a Team Hoyt member, stopped the chair one final time. He took out the dry towel he’d hidden away and used it to dry Rick’s face and glasses. He took off his own poncho and jacket, displaying his Team Hoyt shirt. As cheers of recognition rose from the wet, but still enthusiastic crowd, they took off on the final run to the finish line. Waiting there patiently in the driving rain was Dick Hoyt, now 78, ready to proudly place Rick’s medal around his neck.

The duo’s target had been 4:34 hours. In the end they were more than happy to finish in 4:54. Chuckled Bryan, “Twenty three of the elite runners had to drop out―we like to think we beat them!”

It was a memorable day in many ways for the 27 Team Hoyt runners, who’d come from all over the US and Canada. Among those trained by Varinka Ensminger and advised by three-time Boston champion Uta Pippig were two other wheelchair duos. Notably behind one chair was Michael Davis, 33, from Suffolk, Virginia, who became the first legally blind chair guide in Boston Marathon history. As he pushed Ashton McCormick, 19, he had a guide of his own who was allowed to warn him of obstacles on the route―but not allowed to touch the chair.

Team members had aimed to raise $115,000 for the special needs individuals the Hoyt Foundation supports. In a fund-raising triumph, by the time they toed the start line, already soaked to the skin, they had upped it to an astonishing $160,000. 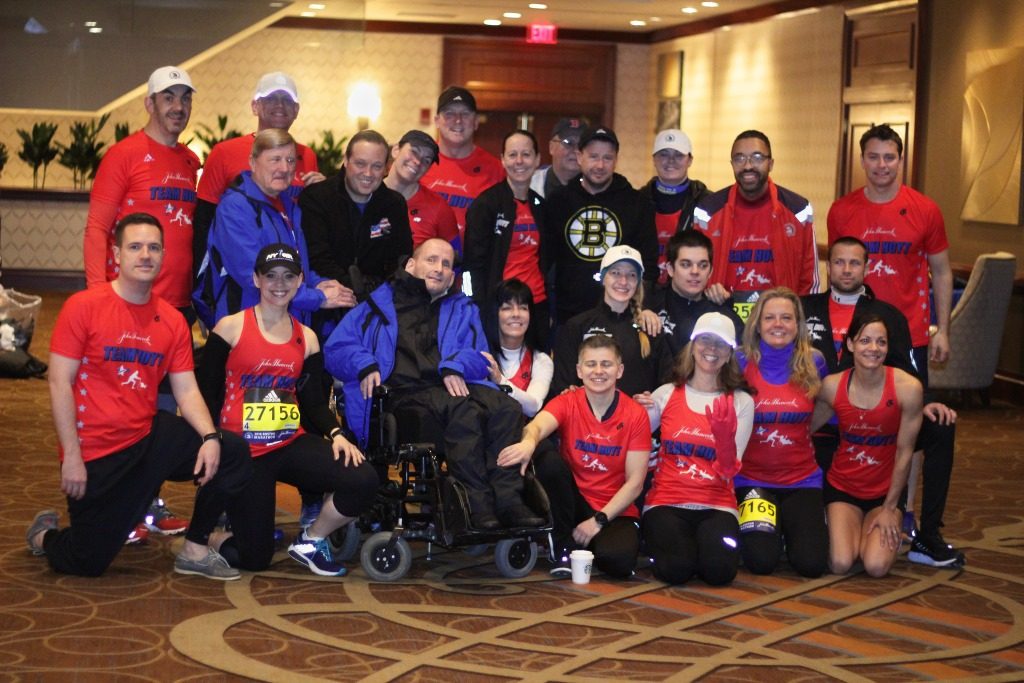