Popular and Pristine: The Annual Bellin Run Keeps Getting Better 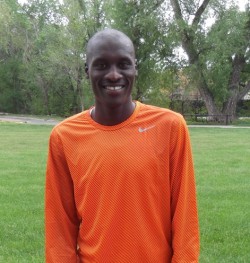 Under unusually cool skies for June, thousands of runners, walkers, strollercizers, and wheelchair athletes took to the scenic streets of Green Bay, Wisconsin on Saturday to participate in the annual Bellin Run—one of the largest timed 10K’s in the U.S. and a race that was founded with health and wellness in mind.

The event, which dates back to 1977, kicks off in front of the Bellin Memorial Hospital, the race’s founding organization. And since its inception, it has continued to grow in popularity. Turnout at this year’s edition improved the record set in 2011, with 20,000 runners signed up for this fixture in the community. Proceeds from the event benefit the Bellin College of Nursing.

East African athletes won both the men’s and women’s elite races, with Kenya’s Lani Rutto coming across the finish line first in 29 minutes and 12 seconds. For Lani, Saturday’s win was especially satisfying: the last two years he finished runner up to Allan Kiprono—but this year he sent his team mate into second place. 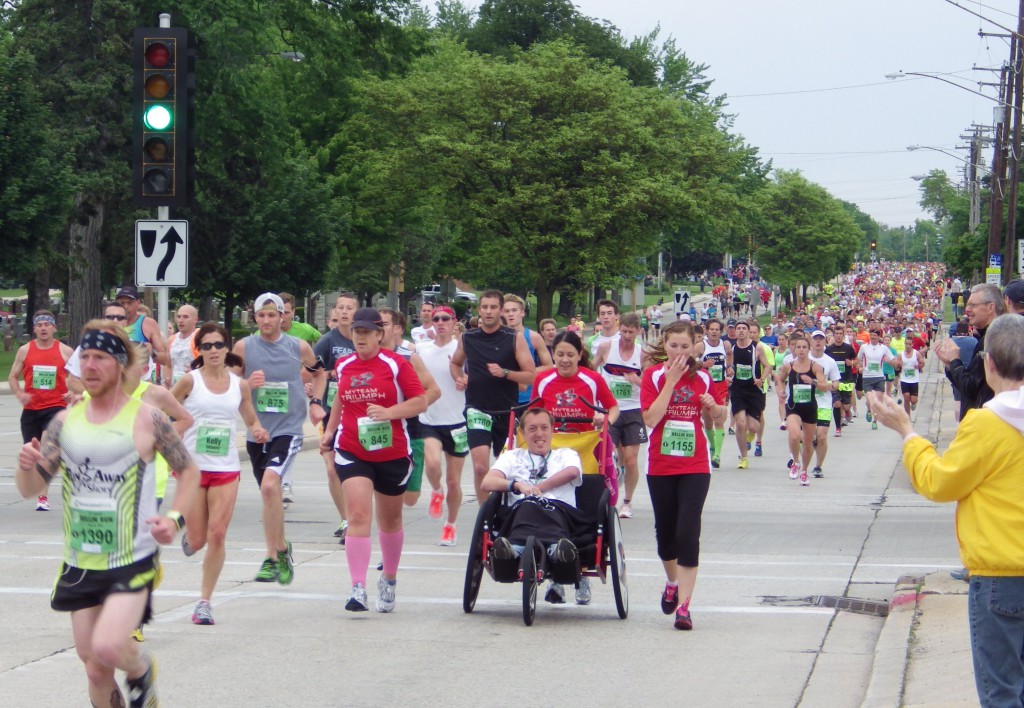 One of 22 TEAM TRIUMPH teams with its captain and the support of three angels makes its way to the finish line. © Take The Magic Step®

“I am very happy to have won here for the first time ahead of Allan,” Lani, who is a member of the KIMbia team and coached by Dieter Hogen, told Take The Magic Step® afterwards. “The conditions were perfect for a fast race, but we started slow. I was very impressed that 20,000 runners came out to Green Bay today to run.”

Allan Kiprono finished 22 seconds later in 29:34, while American Bill Jones was third with a time of 30:10.

The women’s competition went once again to Risper Gesabwa of Kenya who successfully defended her title in 32:58. Millicent Kuria of Kenya (33:23) and Melissa White (33:24) of the United States placed second and third respectively.

Celebrating the day with fellow runners was Take The Magic Step’s Uta Pippig. 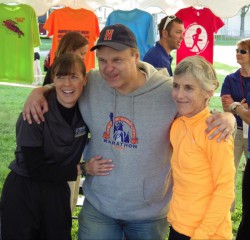 Joan Benoit Samuelson and Uta enjoy the great atmosphere during the events of the Bellin Run weekend. © Take The Magic Step®

“We had fantastic weather conditions—unusually cool for a race in June in Wisconsin,” she said. “I was lucky—I felt a little better compared to my run in the BolderBOULDER on Memorial Day. The healing process for my hamstring is going in the right direction. Step by step. And the support from spectators out on the course was amazing.”

On Friday, Uta started her day by meeting with the members of the KI corporate team. KI—Green Bay’s innovative furniture and interior design company—is the Bellin Run’s gold sponsor. During this seminar, Uta talked to the athletes about “Running To Freedom™,” as well as how to prepare for the 10K, including some last-minute tips to help the runners on race day.

Afterwards, Uta joined over 1000 young athletes in the Dick Lytie Children’s Run that winds around Astor Park, where the race’s Health and Fitness Expo is held. 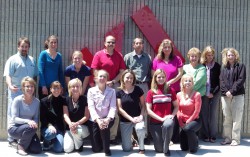 Uta with the members of KI’s corporate team. © Take The Magic Step®

The Children’s Run celebrated its 18th year and, like the Bellin Run, continues to grow in popularity with 1063 children registered—up from 906 last year. “Hanging out with the kids during and after their event and seeing their enthusiasm and the fun they were having convinced me once again that events like these, involving the entire community, are the best,” Uta said.

“And congratulations to all the kids, as well as myTEAM TRIUMPH participants, runners, walkers, the corporate teams, our Kenyan team—and not forgetting Joanie [Benoit Samuelson] and Billy [Rodgers] who joined the fun.”