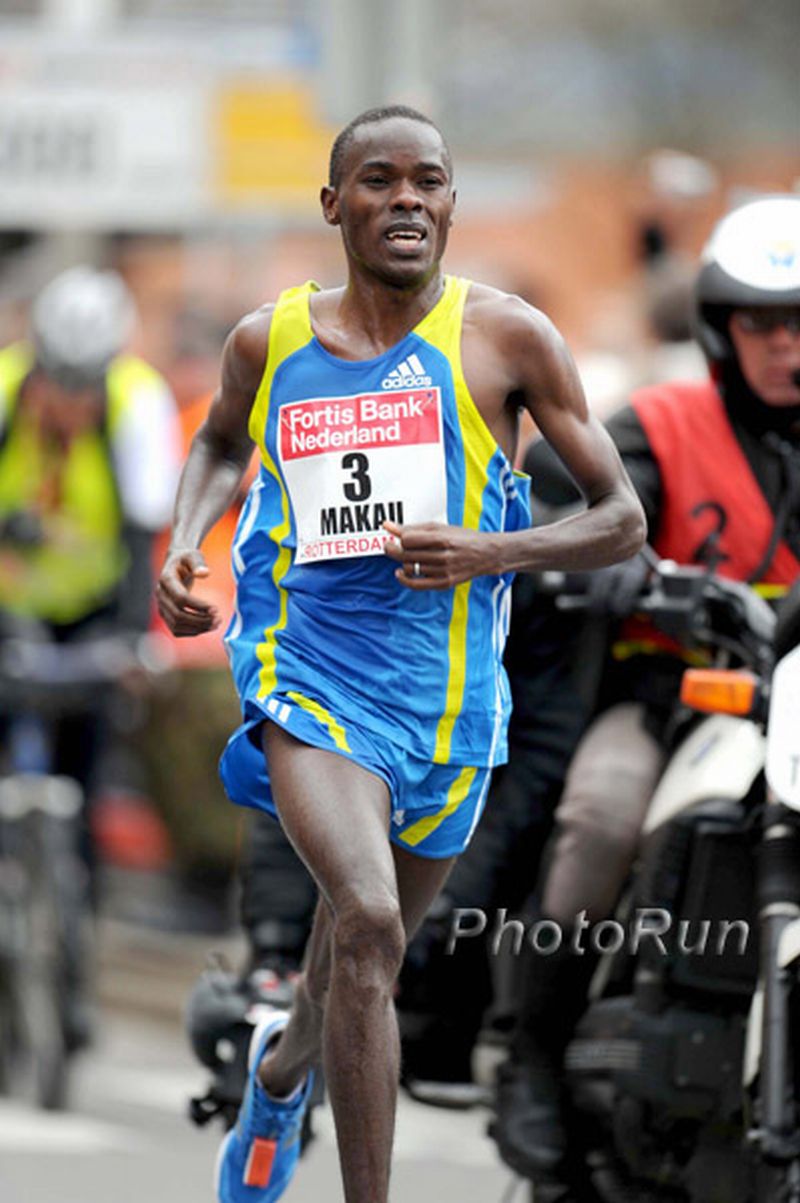 Patrick Makau on his way to victory at the Rotterdam Marathon. © www.photorun.net

Patrick Makau is the latest in a long line of Kenyan marathoners who have the potential to improve Haile Gebrselassie’s two-year-old world record (2:03:59 hours). The 25-year-old showed his ability in Rotterdam in April 2010 when he ran 2:04:48 despite windy conditions—the fourth-fastest marathon ever. His next race will be the 2010 real,- Berlin Marathon, which is held on September 26 in Germany’s capital.

Running was the only realistic means to escape poverty for Patrick Makau who is also known by the name of Patrick Musyoki. Growing up in a farming family in humble circumstances in eastern Kenya, he turned to running. “My ambition was to have a better life,” he recalls. Patrick Makau comes from the same region as the former Bank of America Chicago Marathon champion, Patrick Ivuti, as well as the 2005 Rotterdam champion, Jimmy Muindi. “I’ve seen how success has helped their families. I used to hear their names on the radio and read about them in the newspapers—I wanted to be like them,” he says.

It was Jimmy Muindi who initially discovered Patrick Makau. In 2004, Jimmy Muindi saw Patrick running in a school competition and offered to help. In July 2005, Patrick Makau ran his first race abroad—a 25-kilometer event in Tanzania that he won. After continued success in Kenya, Patrick was able to enter his first European race in April 2006—a half marathon in Turkey where he took the title despite some unusual challenges. “It was my first foreign race and, due to lack of a chaperone, I missed the start while doing my warm up jog since there was no one to direct me. I had to start when the rest of the pack had done 100 meters. It was also my first time to race in new running shoes and 1K into the race, the left shoe laces untied and I had to stop to tie them up. Well into the 15K mark, the other pair did the same and I decided not to stop again,” Patrick recalls. At that race, he met Ian Ladbrooke of the United Kingdom who has been his manager ever since.

Ian Ladbrooke was able to get Patrick Makau into various well-established European road races. The first of these was 2006 in Berlin where he ran the 25K, winning in 1:14:08 despite initially taking the wrong direction at the finish in the Olympic stadium.

He then continued his success streak with a victory at the Vattenfall Berlin Half Marathon in 2007 and 2008, and secured the 25K for a second time in 2007. He is one of the most consistent half marathoners in the world, breaking the hour on eight occasions already. With his best time of 58:52 minutes, which he set in winning the Ras Al Khaimah (United Arab Emirates) event in 2009, Patrick Makau is the third-fastest man half marathoner ever. In addition, he was runner-up for “The Half” at the World Championships in 2007 and 2008.

Patrick Makau made his marathon debut in Rotterdam a year ago and finished fourth in 2:06:14. At his second marathon in New York he had to drop out of the race due to an injury.

Despite that unfortunate setback, he’s now one of the fastest men in history. “Thanks to this success I’ve been able to do a lot to help both myself and my father’s family,” Patrick Makau says. He notes that his current ambition is to break records. When asked about those he admires, Patrick names Paul Tergat: “I hope that one day I can be as successful as Paul.”

Paul Tergat broke the world marathon record with 2:04:55 in Berlin in 2003. Patrick has now already run seven seconds faster than that. He keeps in close contact with Paul Tergat though they have different managers. Paul is part of the group led by the Italian, Federico Rosa. “That’s not a problem. We live in the same area in Ngong, close to Nairobi and regularly train together,” Patrick explains.

And the success of Makau family may not end with Patrick Makau. One of six kids, he holds out hope for the family’s future. “Up to now I’m the only runner in the family, but that could still change. Five of my siblings are younger than me,” he says.