Our Preview of the Fall Marathon Season: From Berlin to New York 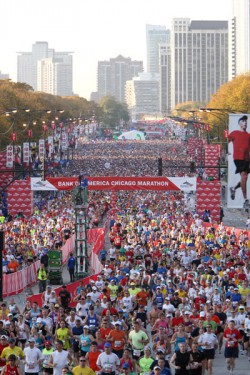 The start of the 2010 Chicago Marathon. © www.photorun.net

The fall marathon season officially gets under way this Sunday with the sound of the starting gun at the BMW Berlin Marathon—and this year, the German capital will provide the stage for some truly exciting duels. At the starting line will be both the men’s and women’s world-record holders in the marathon—Haile Gebrselassie of Ethiopia and Paula Radcliffe of Great Britain—as well as Germany’s Irina Mikitenko. But Berlin is not the only race loaded with talent and in fact, several of the fall marathons have the potential to lower world records. Berlin is just the first of three World Marathon Majors (‘WMM’) events, with Chicago following, two weeks later on October 9, and then New York City on November 6.

Despite the focus on the elites, participation in these WMM events has become so popular that their massive fields are filled quickly. In Berlin, for example, all 40,000 entries were sold out by March—a stunning new record.

The best marathoners from around the world—dominated as usual by those from East African countries like Ethiopia and Kenya—will be battling each other over the classic 26.2-miles. Big-city streets will be lined with hundreds of thousands of cheering spectators, and millions more will watch the races unfold on their televisions as well as on the internet.

Just ten years ago, the dream of the world’s best was to run under 2:05 hours. Paul Tergat of Kenya was the first to achieve it in 2003 when he won the Berlin Marathon in 2:04:55. Today, the depth of talent is so incredibly strong that the sub-2:05 mark has been cracked no fewer than 15 times. Amazingly, one third of these times were run this spring. At this year’s Boston Marathon, Geoffrey Mutai of Kenya crossed the finish line in 2:03:02 hours—the fastest marathon ever run. Just four seconds behind, on his marathon debut, was fellow Kenyan Moses Mosop.

Despite Geoffrey Mutai’s impressive performance, the official world record (2:03:59) still belongs to Haile Gebrselassie, who set it three years ago in Berlin. Boston has an elevation drop of 139 meters and a point-to-point course, so it cannot be recognized for national or world records. (The rules state that a maximum gradient of one meter per kilometer is allowed and start and finish lines cannot be apart more than 50 percent of the total distance.) But anyone familiar with Boston will know that its formidable late-in-the-race hills make it hardly an easy course.

It Is World-Record Holder Versus Defending Champion in Berlin

Haile Gebrselassie is hoping to use the Berlin Marathon to qualify for the Olympics. © www.photorun.net

Berlin kicks off the season on Sunday with a fascinating duel between Patrick Makau and Haile Gebrselassie. Defending champion Patrick Makau could present a major challenge for the world-record holder. In 2010, he improved his personal best to 2:04:48 in rainy conditions, becoming the fastest marathoner of the year. With a time like this, he stands a good chance of breaking the world record. The question is whether this is possible in a race against the likes of Haile Gebrselassie, and the two men are expected to lead the field alongside a number of pacemakers. It is unlikely that the race will be tactical early on since an added inducement to both runners is they need a world-class time to make their respective countries’ 2012 Olympic teams. Only three spots are available per country, and the competition for these coveted slots is understandably so fierce in Kenya that a time of 2:05 may hardly suffice.

The women’s field on Sunday is one of the deepest in the 37-year history of the Berlin Marathon, which began in the Grunewald forest in 1974. For the first time in her professional career, world-record holder Paula Radcliffe will participate in a German road race. She has not competed in a marathon since November 2009 when she placed fourth in New York. She has been sidelined by injuries as well as a planned hiatus to have her second child in September 2010. 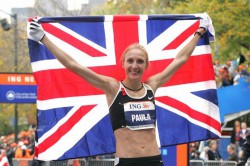 When asked about her goals in Berlin, Paula had this to say: “It is always my aim to win. But it is too early now to speak about time goals. We will set these before the race, when we know how all the training went. The main thing for me is to stay healthy and run this marathon without problems.”

It is possible that the 37-year-old will set herself a target time of 2:20 provided she gets good weather conditions—and it will be interesting to see to what extent Irina Mikitenko can challenge her. The 2010 half-marathon champion, Florence Kiplagat, will also be a factor in the race: The Kenyan runner had to drop out during her marathon debut this spring in Boston, but showed good form during the summer. She won a half marathon at the Wörthersee (Austria) with a time of 68:02 minutes in hot temperatures. In all, eight runners in Berlin’s women’s elite field have personal bests of under 2:28—and six of them are under 2:26.

Will Liliya Shobukhova Achieve the Three-Peat in Chicago? 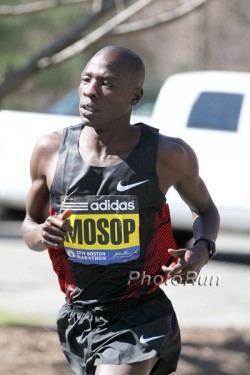 The organizers of the Bank of America Chicago Marathon always set the stage for a possible world-record attempt. This year they are pinning their hopes on Kenya’s Moses Mosop who made a spectacular debut in Boston this spring with a time of 2:03:06. America’s Ryan Hall, who had a strong race in Boston as well (finishing fourth in 2:04:58), would like to improve the American record of 2:05:38, which was set by Khalid Khannouchi nine years ago in London—a world record at the time. “I am excited to line up at the Chicago Marathon,” said Ryan Hall, whose start in the ‘Windy City’ will be a first. “Every time I race against a world-class field I learn more about myself and continue to evolve as an athlete.”

In the women’s competition, defending champion Liliya Shobukhova of Russia returns and is considered to be again a major contender. If she retains her crown, she would be the first to win the race three times in a row and would also take the WMM-series for the second consecutive time. The Russian champion has stated that she wants to run sub-2:20 in Chicago, but a men’s or women’s champion has yet to achieve the three-peat in Chicago. Khalid Khannouchi has won the race four times, but that was over a period of six years.

“These athletes round out an elite field that is not only dynamic, but has the potential to attack the record books. If the weather is good, there could be some reshuffling of not just the Bank of America Chicago Marathon records, but also the list of all-time fastest certified marathons,” said executive race director Carey Pinkowski.

The 2011 London Marathon champions, Emmanuel Mutai and Mary Keitany, will be at the starting line of the New York City Marathon. © www.photorun.net

The organizers of the ING New York City Marathon have already signed a number of high-profile elite runners, including defending champion Gebre Gebremariam (Ethiopia) and Edna Kiplagat (Kenya). Boston winners Geoffrey Mutai and Caroline Kilel as well as the London champions Emmanuel Mutai and Mary Keitany (all from Kenya) will also join the race. “The field is going to be Blockbuster strong,” said race director Mary Wittenberg. However, due to its challenging course, a new world record is not expected there. On November 6, an estimated 45,000 participants will make their way from the New Yorker district Staten Island to Central Park.

The Ten Fastest Marathons in History*

*The Boston Marathon has an elevation drop of 139 meters and a point-to-point course, so it cannot be recognized for national or world records. The rules state that a maximum gradient of one meter per kilometer is allowed and start and finish lines cannot be apart more than 50 percent of the total distance.

*A WMM Series takes place over a two-year cycle. The one million dollar prize money is divided equally between the two overall winners. The first five finishers of each WMM race are awarded points with the winners receiving 25 points.