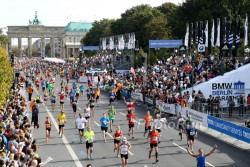 The race in Berlin with the Brandenburg Gate at the finish is the first of the big city marathons this fall. © www.PhotoRun.net

It is fall marathon season again, with 26.2-mile races around the world packed with potential for records and headlines. The eagerly-awaited competition begins with the BMW Berlin Marathon on the last Sunday in September, followed by Chicago, Amsterdam, Frankfurt, and New York City. The elite athletes will be among no fewer than 180,000 runners who will take part in these five races alone—with countless more in other international marathons from now through December.

Berlin and New York City will once again have strong fields. Although the undulating nature of the New York course usually prevents very fast times, Meb Keflezighi is making a much-anticipated return to the Big Apple course where he won in 2009. In Germany, attention will also be on the Frankfurt Marathon on the last Sunday in October, where Arne Gabius will be taking aim at the national marathon record, which has stood for 27 years.

While Eliud Kipchoge Duels with Emmanuel Mutai in Berlin, Can the Women Go Under 2:20? 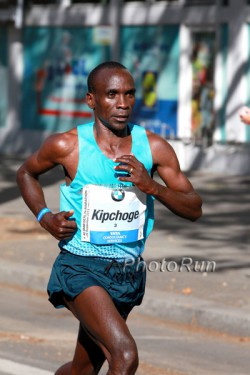 How fast can Eliud Kipchoge run in his second Berlin Marathon? © www.PhotoRun.net

When Uta—herself a three-time Berlin champion who won the first, historic race that united the East and West 25 years ago—fires the starting gun for the BMW Berlin Marathon, one thing will be crystal clear: the race, as always, is going to be fast. An incredible ten world records have been set on this course. This year’s race on the last Sunday in September brings together two Kenyan rivals who have each finished second in the last two years: Eliud Kipchoge ran 2 hours, four minutes, and 5 seconds two years ago, while his fellow countryman Emmanuel Mutai went even faster than that 12 months ago with a 2:03:13 finish. Amazingly, it took a world record to defeat them on both occasions: In 2013 Wilson Kipsang won in 2:03:23 and a year later Dennis Kimetto ran 2:02:57.

Two other athletes will line up with best times under 2:05—Geoffrey Mutai of Kenya, who is no relation to Emmanuel, and Ethiopia’s Feyisa Lilesa. Geoffrey ran a sensational course record of 2:03:02 in Boston back in 2011 and Feyisa achieved a 2:04:52 in Chicago in 2012. It is very likely that we will be seeing times close to the world record.

The women’s race looks to be a duel between Ethiopia’s Aberu Kebede and Gladys Cherono of Kenya. Aberu has already won Berlin twice (2010 and 2012) and set her personal best there three years ago (2:20:30). In Dubai in January Gladys ran a brilliant marathon debut, finishing second in 2:20:03. These speedy times beg the question: will the women break the 2:20 barrier in Berlin for the first time since 2011? Germany’s Anna Hahner will also be running in Berlin after finishing seventh and improving her best to 2:26:44 last year.

It will be an emotional day for Uta, celebrating the 25th anniversary of her amazing triumph in the historic Reunification Marathon. This year, she will be taking part as a member of the relay team of ‘RTL-Spendenmarathon’—a charity program of the German television network RTL, whose motto is, “We help children!” During race week she will also be taking part in the Bambini Run and the children’s 4.2195K mini Marathon as well as attending the Expo. You can find out more about Uta’s schedule in Berlin by clicking here: Uta’s Appearances. She wishes everyone involved in these incredible events, whether as a participant, volunteer, or spectator, every success and hopes they have a great time! 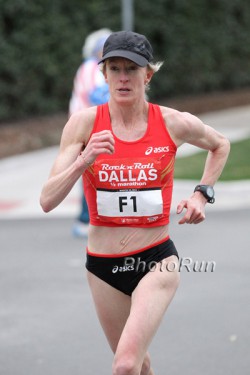 Good luck, Deena, for your marathon in Chicago. © www.PhotoRun.net

This year, the Chicago Marathon’s organizers surprised the running world by announcing that there would be no pacemakers in their race. Among the six World Marathon Majors races, Chicago rivals Berlin as an incredibly fast course that has proved great for record attempts. It is going to be fascinating to see how times develop this year without the pacers to help. Chicago’s elite field is not as strong as in previous years with the Kenyans Sammy Kitwara (2:04:28) and Dickson Chumba (2:04:32) owning the fastest seed times. Both set their personal bests in Chicago a year ago when they finished second and third behind Eliud Kipchoge. The top American in the race is Fernando Cabada with a 2:11:36 personal best.

In the women’s race, Florence Kiplagat is seeking to prove her enormous potential in the marathon. The Kenyan athlete has run sub-2:20 on one occasion and that was in only her second race at the distance when she won Berlin in 2011 in 2:19:44. In the meantime, she has twice bettered the world record for the half marathon. Her 13.1-mile best of 65:09 suggests that she has clear room for improvement at the full marathon distance. Among her rivals in Chicago will be Mulu Seboka of Ethiopia, who improved her best to 2:21:56 on the fast and flat course in Dubai in January. Not to be ignored is 2004 Olympic bronze medalist Deena Kastor of the United States, who, with a 2:19:36, owns the fastest time in the field. Now aged 42, Deena is looking to set a new American Masters record.

Can Wilson Chebet Do it Again in Amsterdam? 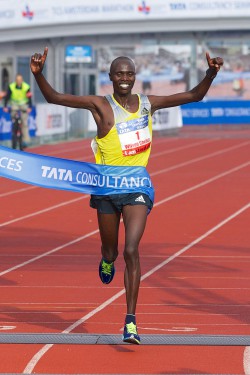 Wilson Chebet is aiming for his fourth win in Amsterdam. © Amsterdam Marathon

Wilson Chebet is known as “Mr. Amsterdam”—and for good reason. The Kenyan athlete earned his nickname after he won the Amsterdam Marathon for the third time in a row back in 2013. The 30-year-old also holds the course record of 2:05:36, which he set two years ago.

Last year, Wilson had to drop out before the finish, but now one of the most consistent marathon runners of recent years is looking to make a comeback. Among his competitors will be Ethiopia’s Tsegaye Mekonnen, who set an unofficial world junior record when he won the 2014 Dubai Marathon in 2:04:32.

Details of the women’s elite field have yet to be announced.

A German runner claims the spotlight in this Gold Label marathon—the highest category of road race awarded by the IAAF, the world-governing body of athletics. Arne Gabius is aiming to improve on his impressive debut along the Main River last year (2:09:32), and is also looking to set a new German national record on October 25 by bettering Jörg Peter’s 2:08:47 that dates back to Tokyo in 1988. 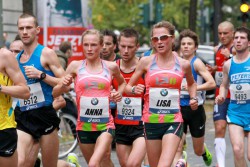 Twins Anna and Lisa Hahner, seen here in the Frankfurt Marathon 2013, will be running in different races this time. Anna will compete in Berlin, while Lisa will be in Frankfurt. © www.PhotoRun.net

Currently, the fastest woman in Frankfurt, where there are likely to be additions in the coming weeks, is Dinknesh Mekash Tefera. The Ethiopian marathoner ran her fastest time of 2:25:09 to finish fourth in the 2013 Paris Marathon. In the spring she placed second in South Korea (2:29:44). Lisa Hahner, the twin sister of Anna who is running Berlin, will attract a lot of attention with her marathon comeback after injury. The popular German is aiming for the Olympic qualifying standard of 2:28:30. 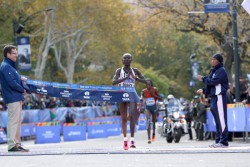 Mary Keitany is the defending champion in New York. © www.PhotoRun.net

An impressive contingent of marathon stars will be on the start line for the New York City Marathon on November 1. Wilson Kipsang, the former world-record holder (2:03:23) whose victories include London, Berlin and Frankfurt, will return as defending champion. Among his rivals are the current Boston Marathon champion, Lelisa Desisa of Ethiopia, and the reigning World Cross Country and Half Marathon Champion, Geoffrey Kamworor of Kenya. The European champion Daniel Meucci of Italy will also be running. Sure to be in the mix as well is the surprise winner of the 2009 New York, former Boston champion Meb Keflezighi of the United States.

The African-record holder, Mary Keitany (2:18:37), is the women’s defending champion. She will face the current Dubai Marathon champion, Aselefech Mergia (2:19:31) and her Ethiopian compatriot, Tigist Tufa (2:21:52). Tigist surprised the field to defeat Mary Keitany and win the London Marathon in 2:23:22 back in April. She went on to finish sixth in the World Championship marathon in Beijing this past summer.

*Times at the Boston Marathon cannot be recognized as world, continental or national records since the course does not conform to the necessary criteria.

The Top Marathon Times for 2015

For the past year, the WMM Series has been following a new system. This year the 2015-2016 series began in Tokyo and will end there in February 2016. The next series will then begin in Boston in 2016 and end there in 2017. Both winners will ultimately receive $500,000 in prize money which will be paid in instalments. Points will be awarded for the top five places in every WMM race with the winner receiving 25 and then on a sliding scale of 16, 9, 4 and 1 for the remaining places. Only two races per year from each runner will now be considered as counting for points. For more information please visit www.WorldMarathonMajors.com.