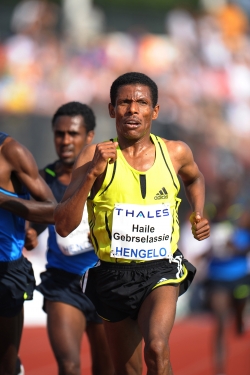 Haile Gebrselassie is perhaps the greatest runner of all time. The Ethiopian has broken 18 official and seven unofficial world records in his career, and has won two Olympic and four World Championship titles at 10,000. That puts the 35-year-old Ethiopian hero at least on a par with the legendary Finn Paavo Nurmi, who in a career lasting until the 1930s set 35 world records, or Emil Zatopek. The crowning moment of the Czech’s career was the 1952 Olympic Games in Helsinki when he won gold in the 5,000m, 10,000m and marathon.

The one accomplishment remaining for Gebrselassie is victory in the Olympic Marathon. Although he has established himself as the fastest runner over 26.2 miles in recent years, he has surprisingly decided not to run the classic distance in Beijing. Gebrselassie is concerned that the air pollution in China’s capital will permanently damage his health.

Instead, he’ll be running the 10,000m for the fourth time at an Olympic Games. He won in Atlanta in 1996 and in Sydney in 2000, and was fifth in Athens. But victory next Sunday in Beijing would be a major surprise since it’s two of his fellow countrymen who should prove too strong for him: defending champion Kenenisa Bekele, who has in the meantime successfully run down one after another of his records, and Sileshi Sihine who won the silver medal four years ago.

Has Gebrselassie deprived himself of the chance to crown his career by his decision not to run the Olympic Marathon? The standard answer would be yes, because in each of the last three years the father of four has been the world’s fastest marathoner. In Berlin in September 2007 he broke the world record of Paul Tergat (Kenya) with 2:04:26. This year in Dubai he narrowly missed it with 2:04:53. His performance once again tops the world rankings for the year.

That Beijing is not the last chance of Olympic Marathon gold for Gebrselassie is the belief of his manager Jos Hermens. “I am sure—and he is also sure—that he can still win at the Olympic Games in London 2012” Hermens says. “His number one aim is first of all to bring the world record down to 2:03. Running the marathon in Beijing might get in the way of that because of the possible after-effects on his health from the air pollution.” That’s why Gebrselassie is likely to be chasing the record at the Berlin Marathon on September 28.

One interesting aspect of Gebrselassie’s marathon career is that, in contrast to his earlier 10,000m races, he has never been able to win a race against strong opposition. The races in Berlin, Amsterdam or Dubai have always been tailor-made for him with pacemakers, but this hasn’t been the case in London. He has run the big city marathon, which usually has the strongest field of the year, and has never finished higher than third. So it wouldn’t have been easy for Gebrselassie in the marathon in Beijing, especially as his Kenyan rivals Martin Lel and Sammy Wanjiru are improving all the time. Is this a weakness of perhaps the greatest runner of all time? Sadly the 2008 Olympics will not be providing an answer.