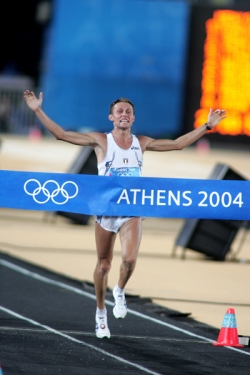 Even at the first modern Olympic Games in 1896, the marathon was the cornerstone of track and field competition. But what is today the classic distance of 26.2 miles (42.195 kilometers) was not run for the first time until the 1908 Olympics in London.

How this odd distance came about is linked—however strange it may seem—to the eruption of Vesuvius in 1906. The 1908 Olympics were originally to take place in Rome, not London. But the volcano’s eruption, which led to widespread destruction around the Italian capital, meant that the Italians had to give up the Games. Berlin was a candidate, but the German capital at that time did not possess the necessary sports facilities. So the British moved to fill the gap.

In previous Olympics, the marathon had been around 40 kilometers rather than a fixed distance, and if the Games had been held in Rome, the 1908 version would also have been 40 kilometers. In London, however, the seemingly arbitrary distance of 42.195 kilometers was run, principally because of the British royal family. At that time the course was measured back from the entrance to the Olympic stadium, 40 kilometers went as far as Eton. But the start was supposed to be directly in front of the east terrace of Windsor Castle so that the royal family could enjoy the view, so the distance became 42 kilometers.

That wasn’t the end of the matter. Another adjustment was needed in the Olympic stadium so that the finish would be in front of the royal box. So another 195 meters were added to reach what eventually became the standard distance.

The new distance, however, didn’t become universally accepted immediately. The International Olympic Committee didn’t decide until 1914 that a marathon should be 42 kilometers. After the course in Amsterdam in 1920 was extended to 42.75 kilometers, the debate began again. It was ultimately the world record committee of the International Athletics Federation, founded in Berlin in 1913, that decided in 1921 that the distance should henceforth be 42.195K.

The 1908 Olympic Marathon is memorable not only because of its distance. In fact, if the course had not been extended by 195 meters to the royal box, the winner would not have been John Hayes of the U.S., but Italy’s Dorando Pietri.

In torrid heat the Italian had been the longtime leader and was first into the stadium. On his last legs, he ran the wrong way. After officials pointed him in the right direction, he collapsed, got up and continued to stumble towards the finish line. Time and again, Pietri fell. As his nearest rival, Hayes, reached the stadium, the officials led the Italian across the finish line, which, naturally, led to his disqualification. Hayes, in 2:55:18, was pronounced the gold medalist.