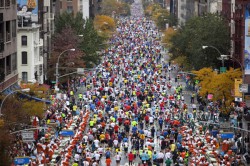 In the wake of the destruction caused by Superstorm Sandy, the ING New York City Marathon—the largest in the world—was cancelled for the first time in more than four decades. Less than 48 hours before 47,000 participants from around the globe were due to cross the starting line in Staten Island, the city’s Mayor, Michael Bloomberg, retreated from his decision a day prior that the race would go on. Giving the green light earlier, he had said that the Marathon would be a symbol of the city’s perseverance and resilience despite the devastation.

But his decision to go ahead drew mounting criticism. A day later, he bowed to pressure from all sides and called off the 43rd annual New York City Marathon. “We would not want a cloud to hang over the race or its participants, and so we have decided to cancel it,” said Mayor Bloomberg. Race director Mary Wittenberg added, “It is with an incredibly heavy heart tonight that we share the best way to help New York City at this time is to say we will not be conducting the 2012 ING New York City Marathon.”

A statement by the New York Road Runners (NYRR), organizers of the marathon, informed participants that, “While holding the race would not have required diverting resources from the recovery effort, it became clear that the apparent widespread perception to the contrary had become the source of controversy and division. Neither NYRR nor the City could allow a controversy over the marathon to result in a dangerous situation or to distract attention from all the critically important work that is being done to help New York City recover from the storm.” 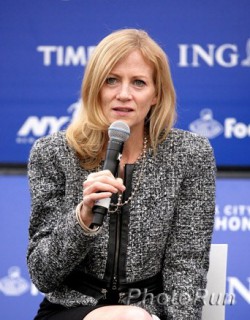 Sandy began as a Caribbean hurricane and developed into an unprecedented storm as it collided with colder air pressures in the North East. It came ashore in New Jersey last Monday evening, causing widespread destruction there. Flooding and power outages hit New York City—particularly the borough of Staten Island, where the Marathon traditionally begins. A day later, the NYRR received what appeared to be definitive assurance from Mayor Bloomberg, that the race would go ahead.

The Mayor’s decision had a lot to do with the vast economic benefit that the event brings to the city. Approximately half of the participants in the world’s largest city marathon, which had 47,323 official finishers last year, come from abroad. Thousands more travel from all over the U.S. The Mayor’s assurance gave them the confidence to board planes and trains bound for New York City.

However, insufficient attention had been paid to the situation on the ground. While preparations for the marathon continued, the true scale of the catastrophe was becoming increasingly apparent. At least 19 people lost their lives in Staten Island, and citizens and politicians from the island borough were horrified at the decision to allow the event to take place. Criticism grew and as a consequence, the Mayor decided to cancel the race on Friday.

Meb Keflezighi: “It’s About the City.”

Understandably, many participants were disappointed to hear the news of the cancellation, but at the same time understood the reasons why. However, the pressing issue that upset competitors is why the race was called off so late (Friday). From Tuesday through Thursday, anxious runners had solidified their plans and reached the city in time to find the marathon called off. 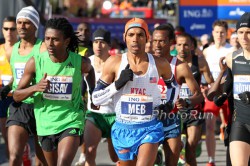 Top athletes, who had come from all over the world, were staying in a Manhattan hotel near Central Park. The 2009 champion, Meb Keflezighi told USAToday.com: “It’s not about me, it’s about the city. If we’re going to have a negative influence, then they have the right to cancel.” On his Facebook page on Friday, Meb called on his fans to support relief efforts if possible.

In order to accommodate the top runners, New York organizers briefly considered holding an elites-only marathon, which would have taken place over four loops of Central Park—ironically, the course where the New York Marathon was first run. But this idea was quickly rejected.

What Happens to the Entry Fees?

It remains to be seen what the financial consequences ultimately will be for organizers. Most likely, the NYRR have an insurance policy for just such an occasion. However, they still have to clarify how they will handle sponsorship money as well as how much of the money from entry fees the top athletes will receive.

The good news for this year’s disappointed runners is that it seems they will be guaranteed a place in the 2013 Marathon. Unfortunately, that may also mean that next year’s race is almost fully booked already. Participants will most likely have to pay a new entry fee. The NYRR stated that runners would not be reimbursed in any way for the cancelled race. Some participants suggested that the entry fees should be put at the disposal of charities working for the hurricane victims.

In the wake of the cancellation, the NYRR are supporting the rescue and reconstruction work currently going on in and around the city. The organizers immediately made one million dollars available, with a further $1.6 million on its way thanks to donations.

Many marathoners who had expected to be lining up at the start in Staten Island on their way to Queens and Central Park on Sunday, instead ran the other way—to the hardest hit areas of the borough, helping to bring much-needed supplies. The New York Road Runners also have been able to place volunteers among those involved in the clean-up work. Further information can be found online at www.INGNYCMarathon.org. 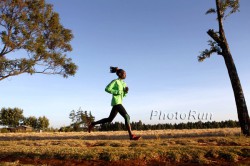 Due to the situation in New York, the World Marathon Majors (WMM)—the top marathon races in Boston, London, Berlin, Chicago, and New York—did not go ahead with the traditional award ceremony on Monday. Kenya’s Geoffrey Mutai already had ensured he would become men’s champion of the 2011-2012 series before the New York City Marathon, and his fellow countrywoman Mary Keitany was declared the winner of the women’s series based on her previous performances. The London Marathon champion had 65 points in the series, and was 15 points ahead of Edna Kiplagat, also from Kenya. The champions share prize money of one million dollars.

Earlier in the week, series organizers announced in New York that Tokyo would be joining the World Marathon Majors (WMM) starting in 2013. Officials from the Boston, London, Berlin, Chicago, and New York City marathons established this series six years ago. The next Tokyo Marathon takes place on February 24 and in its last edition had 36,000 participants. More than 300,000 applications have been received for next year’s race.