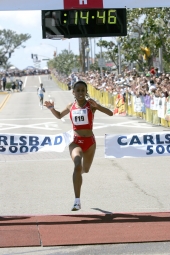 The Ethiopian Meseret Defar set a new 5-kilometer world record in Carlsbad (California). The 22 year old 5,000-meter Olympic Champion of 2004 in Athens won in 14:46 minutes. In the men’s race the winner came from Ethiopia as well: Abreham Cherkose clocked 13:15.

Meseret Defar, who finished second last year at the 5,000m World Championships and was beaten by her countrywoman Tirunesh Dibaba, ran right from the start her own pace and set a new world record. She bettered the old best time of Tirunesh Dibaba and Paula Radcliffe (Great Britain), who both ran 14:51 minutes, by five seconds. Isabella Ochichi (Kenya) finished second in a very good time of 14:53. The Ethiopian Ejigu Sentayehu came in third in 15:17. “I did not go to the World Cross Country Championships last week because I wanted to break the world record here in Carlsbad,” said Meseret Defar.

In the men’s race a leading group of four people passed the first mile in 4:10 minutes. The pace was increased 400 meters later and Abreham Cherkose finally separated himself clearly from the group. Runner up was Boaz Cheboiywo (Kenya/13:28). Third place took Sammy Kipketer (Kenya/13:31), who set the current 5K world record of 13:00 minutes by winning Carlsbad in 2001.