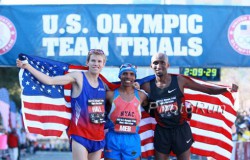 Every four years, the United States holds one race that is the dream of thousands: the Olympic Trials Marathon. At this event, the U.S. Olympic Committee (USOC) selects the top three runners, male and female, to represent their country at the upcoming Summer Olympic Games. On Saturday in Houston, Texas, under cool skies with temperatures in the mid 40s Fahrenheit—good conditions to run 26.2 miles—114 men and 191 women stood on the starting line with hopes of making the team that will head to London this summer. Many of them had been hard at work for four long years trying to qualify for the race (which entails clocking 2:19:00 for the men and 2:46:00 for the women). Athletes also could qualify for the trials by running a 10,000-meter and half-marathon standard.

Taking place a day before the Chevron Houston Marathon, the flat and fast trials course was uniquely tailored to allow spectators maximum viewing capabilities while giving athletes a chance to run their fastest. It began with one 2.2-mile loop of downtown Houston, followed by three 8-mile loops along Allen Parkway, an arterial road west of the inner city.

The National Anthem raised the curtain on the men’s race at 9 a.m., and pre-race favorite Ryan Hall, the runner with the fastest marathon qualifying time ever in American history (2:04:58 at the 2011 Boston Marathon), opened it up in dramatic fashion with a blazing 4:49 first mile. The 2008 Olympian, Dathan Ritzenhein, as well as the 2009 winner of the ING New York City Marathon, Meb Keflezighi, tucked in right behind Ryan. An additional four runners were close by and when the leaders reached the two-mile mark, the group was at seven with the chase pack seven seconds further back.

Ryan Hall continued to set the pace into mile three and four on a 2:07-hours finishing time with Dathan Ritzenhein, his competition since high school, on his shoulder. By the ninth mile, the followers had been winnowed to four—Mo Trafeh, Dathan Ritzenhein, Abdi Abdirahman, and Meb Keflezighi—with Ryan still in the top position, taking long looks over his shoulder at those trying to pass him.

A mile before the half-marathon mark, three-time Olympian Abdi Abdirahman made a move to the front, seizing a very slight lead, but Ryan Hall was able to counter and both went through the half in approximately 1:03:25 hours. 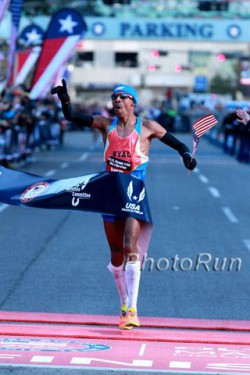 Meb Keflezighi qualified for the third time for the Olympic Games. © www.photorun.net

The group thinned even more early in the second part of the race with Gate River Run champion Mo Trafeh fading. This left the trials in the hands of veteran marathoners Dathan Ritzenhein, Ryan Hall, Abdi Abdirahman, and Meb Keflezighi. And with the last ten kilometers to go, it became apparent who the top three finishers would be, since Dathan Ritzenhein not was not able to stay with the others and looked in pain from leg cramps.

Appearing relaxed, but no longer talking with each other as they had done in earlier parts of the race, the three runners took the final miles much slower than the fast pace at which they had begun the marathon.

With a few miles left, Abdi Abdirahman was the next to fall back—losing contact with the leaders by five seconds. His form had been looking smooth, but at that point he began to flail and looked back often for Dathan Ritzenhein, the only person who could prevent him from going to the Olympics.

Into the final mile, it was the 2004 Olympic silver medalist, Meb Keflezighi, who ultimately prevailed. There had been much discussion about the fact that Meb ran the New York City Marathon in November, so close to the trials, but obviously this was no obstacle to his performance. Smiling, with the finish line in sight, the father of three saluted the crowd with an American flag in hand. He broke the tape in 2 hours, 9 minutes and 8 seconds, a new personal best. Ryan Hall, the 29-year-old American half-marathon record-holder, was second with 22 seconds back, while Abdi Abdirahman rounded out the Olympic trio in 2:09:47. With his qualification for London, the 33-year-old overcame the struggles he had last year with a stress fracture in his right leg.

“To be on my third Olympic Team is all I have been dreaming about,” a smiling Meb Keflezighi told the press afterwards. Second-place finisher Ryan Hall was upbeat about his early strategy to run hard. “I ran fast early because I was feeling good,” he said. “You never know what’s possible on the day.” 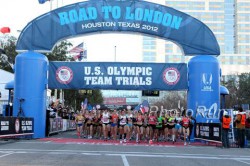 The start of the women's race. © www.photorun.net

The women’s race began 15 minutes after the men’s—in completely different fashion. A large group immediately formed with no clear frontrunner into the first mile, which was clocked in a slow 6:11 minutes. It appeared from the outset that the race would be a tactical affair. However, going into the second mile, Desiree Davila—one of the favorites and the second-place finisher at last year’s Boston Marathon—seized the lead, pushing the pace with a 5:48 mile. Alongside Desiree was 2:27 marathoner, Amy Hastings.

By the fourth mile (23:05), Desiree had opened up a two-second lead over a large chase pack that included American 10,000m record-holder Shalane Flanagan and 2008 Olympian Kara Goucher. By the seventh mile, the race dynamics had not changed much with the leaders crossing the mark in 39:50 minutes (2:29-hour pace). However, as the women began to enter downtown Houston near the eighth mile, Amy Hastings moved slightly ahead but her rivals were able to stay with her. The leaders, including Desiree Davila, Shalane Flanagan, the 2004 Olympic bronze medalist Deena Kastor, Kara Goucher, and Serena Burla, increased their speed by the tenth mile, crossing the mark in 56:31.

This lead group started to break up afterwards, when Serena Burla and Deena Kastor were unable to stay up front with the remaining four competitors. The 16-mile mark (1:29:33) was the fastest mile (5:18 minutes) of the race thus far and it resulted in Amy Hastings falling behind temporarily. But Amy would not let the pace shake her and she surged back into the lead—similar to what she did in her debut marathon in Los Angeles last year.

Shalane, Desiree, Kara, and Amy powered through the next few miles generating a lot of excitement in the enthusiastic crowd. Of the four, who was the one who would not make the team? It was anybody’s guess at that point.

But by mile 20, Amy Hastings, who had valiantly tried to hang on, dropped back as much as five seconds behind the other three. The pace continued to be grueling and well ahead of the existing trials record of 2:28:25 hours, which was set by Colleen De Reuck in St. Louis in 2004. 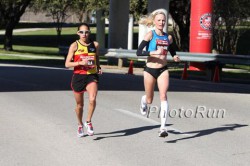 Desiree Davila and Shalane Flanagan battle for the lead. © www.photorun.net

Shalane Flanagan and Desiree Davila, both their faces now revealing the strain, took turns pushing the pace and 33-year-old Kara Goucher could not stay with them once the 22-mile point was reached.

“These are dreams,” Shalane told the press in her post-race interview. “We fulfilled dreams today.”

Kara Goucher’s podium finish was especially poignant as she was one of the seven top “marathon moms” who had qualified for the trials. Kara has a one-and-a-half-year-old son. She and Shalane are both coached by Jerry Schumacher in Oregon. 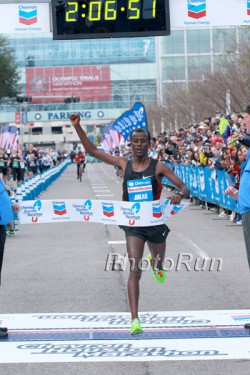 One day after the dramatic U.S. Olympic Trials Marathon, 17,658 runners lined up in the same city for the 40th Chevron Houston Marathon and the 12th Aramco Houston Half Marathon, which followed their traditional courses rather than the 26.2-mile route specially designed for the trials. Clear skies and cool temperatures of 52 degrees Fahrenheit greeted the runners on Sunday as the excitement of the marathon weekend continued for thousands of spectators and participants alike.

It was a day in which all four course records tumbled. In the men’s marathon, 27-year-old Tariku Jufar of Ethiopia won with a personal best of 2:06:51—two years after being injured in a car accident—ahead of his compatriots Debebe Tolossa (2:07:41) and Demssew Tsega (2:11:13). After the race Tariku told reporters, “I was very much encouraged by the people on the side cheering us.” In the women’s marathon, 26-year-old Alemitu Abera of Ethiopia crossed the finish line at the George R. Brown Convention Center in first place in 2:23:14 hours. Benita Willis (Australia/2:28:24) and Yihunlish Delelecha (Ethiopia/2:31:19) rounded out second and third place.