The 40th Edition of the ING New York City Marathon was indeed a memorable one. Not since 1982 has an American man won the race. Thirty-four-year-old Meb Keflezighi, 2004 Olympic silver medalist, ran 2:09:15 hours in a thrilling duel with four-time Boston Champion Robert Cheriuyot. In the women’s race, Derartu Tulu of Ethiopia (2:28:52) put in a final kick to outsprint the Russian, Ludmilla Petrova (2:29:00). The finish at the women’s wheelchair race came down to a sprint between four athletes. Edith Hunkeler of Switzerland won in 1:58:15. The men’s race was even closer as defending champion, Kurt Fearnley of Australia, won in a photo finish over Krige Schabot of the United States. Both athletes clocked the same time: 1:35:58. 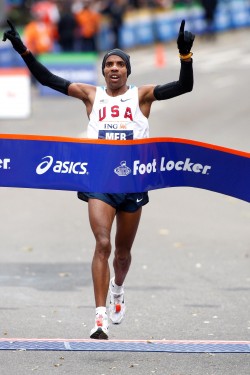 Meb Keflezighi becomes the first American to win since 1982. © www.photorun.net

The beginning of the men’s marathon was a bit of a surprise. Moroccan Abderrahime Bouramdane took an immediate lead with a large pack trailing him by about 10 seconds. By the two-mile mark, 2004 champion Hendrick Ramaala broke from the pack and caught up with Bouramdane.

After the second mile, Kenyan Patrick Makau, the half-marathon specialist and the man who had run a record seven half-marathons under an hour, took the lead. Five kilometers were clocked at 15:51 minutes—not a fast pace for this talented group of runners. New York is a tough course with late-race hills, which might have explained the pack’s initial caution. At the 5K mark, Makau was in the front with Ramaala right on his shoulder and the other lead runners just one second behind.

Things changed as the runners hit the race’s mid-point in Brooklyn. By 15K, it was the Moroccan, Abderrahime Bouramdane, in a commanding lead; out there, running alone into the wind. Bouramdane’s surge surprised the pack, but they let him go. He had a three-second lead at that point—the biggest lead in the race thus far. Close behind were Americans Ryan Hall and Meb Keflezighi, Kenyan runners Jackson Kipkoech and James Kwambai, defending champion Marilson Gomes dos Santos, and a handful of other runners.

Bouramdane remained in the front for the next 5K, but all the runners looked incredibly strong. At that point, it was anybody’s race, but then the first runner dropped back from the pack: dos Santos.

By 25K, as the runners were challenged by the up and down of the steep Queensboro Bridge, Bouramdane’s lead (1:17:32) was only fractions of a second. The runners crossed into Manhattan and by 30 kilometers with a lead time of 1:32:12 hours, there was no change in the dynamic: Bouramdane in the front, the pack on his shoulder.

And then things really changed. Surging ahead of the pack and passing the Moroccan, were the 2004 Olympic silver medalist, Meb Keflezighi, and the four-time Boston champ, Robert Cheruiyot. By 35K the gap had increased to nearly a minute. The rest of the runners now formed a long, single file line.

With the last 5 kilometers to go, it was a footrace between Cheruiyot and Keflezighi—each runner testing the other to see what they had left. They battled on through the 40K mark and through the hills of Central Park.

Then Meb made the decisive move, surging ahead of Cheruiyot and gaining a 10 second lead. As Meb made the final turn, he repeatedly made the sign of the cross in memory of his training partner Ryan Shay, who had suddenly collapsed and passed away at this spot in Central Park during the 2007 U.S. Olympic Trials.

Meb Keflezighi put his finger up in the air and flashed a beaming smile as he crossed the finish line in 2:09:15 hours—a 4:56-per mile pace and a personal record. Cheruiyot came in 41 seconds later at 2:09:56. The two hugged with their respective country’s flag draped around them. An emotional Keflezighi ran over to his wife and two children and embraced them. Third place went to the Moroccan, Jaouad Gharib in 2:10.25.

At the post-race press conference, a smiling Keflezighi had this to say: “I had a wonderful day. I’m glad the crowd is phenomenal as always.” Meb thanked the crowds in his own special way as he headed into Central Park—he kept pointing to the USA on his shirt, emphasizing the American victory we were watching …

Exciting and Unexpected Finish for the Women 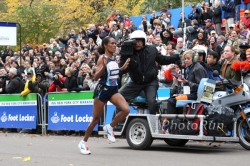 The women’s race was equally exciting. Leading the pack from the very beginning was the world-record holder and returning champion, Paula Radcliffe. Behind her was the 2009 Boston Marathon champion, Salina Kosgei, the 2000 New York City Champion, Ludmilla Petrova, Ethiopian Derartu Tulu, and the Japanese hopeful, Yuri Kano. Petrova, Kano, Tulu, and Kosgei drafted behind the towering Radcliffe. Just after the leaders crossed 5K at 17:35, an unfortunate event occurred—an event that changed the dynamic of the race. Kosgei got caught on Kano’s shoes and the two of them—two of the hopefuls to win the race—fell to the ground. Proving their determination, both runners got up quickly and caught up with the pack. Kosgei looked to have suffered the worst with a large scrape on her knee and blood dripping from it. But she didn’t give up.

By 10 kilometers (35:15), the group was made up of six runners: Radcliffe, Petrova, Kosgei, Kano, Tulu, and French record holder in the marathon, Christelle Daunay. A track runner early in her career, 34-year-old Daunay looked relaxed as she ran alongside Radcliffe.

The race started to break up at the Queensboro Bridge when Daunay put on a strong surge coming down the steep section that leads into Manhattan to gain a two-second lead over her followers.

At 32K, it was down to four runners: Radcliffe, Tulu, Daunay, and Petrova. They all ran together through the Bronx and they all looked strong with no one showing any signs of fatigue.

At the 38K mark, as they entered Central Park, both Radcliffe and Daunay fell off the pace. It was now a two-person race between Tulu and Petrova, with Tulu looking to be the stronger of the two. Her form was unbroken, while Petrova was showing signs of fatigue. But gutsy Petrova stuck with Tulu. Derartu Tulu, the gold medalist at the 10,000m in the 1992 Olympic Games, was battling step for step with Ludmilla Petrova, the owner of the world masters record in the marathon.

The appreciative crowd roared. It was a real footrace in Central Park. Petrova and Tulu ran side-by-side for several kilometers. As they rounded the last turn Tulu made a final surge and distanced herself from Petrova, crossing the finish line in 2:28:32. Petrova came in eight seconds later. Third place went to Christelle Daunay in 2:29:16.

Derartu Tulu made history as the first Ethiopian woman to win the New York City Marathon.

Afterwards, Tulu sounded pleasantly surprised with her win. “I did not come here necessarily expecting to win. But I am very happy to have won,” she said.

Returning champion, 28-year-old Kurt Fearnley, was confident going into the men’s wheelchair race. But the Australian was pushed to his limits as he went for a repeat win. Staying in the top three for most of the race, Fearnley maintained control of the race, but was heavily challenged by 46-year-old Krige Schabort of the United States. The two exchanged leads all the way until the finish line was in sight, where, side-by-side, the two competitors wheeled towards the tape. In what was the closest wheelchair race in the marathon’s history, they crossed the finish line with identical times of 1:35:58 hours. But ultimately Fearnley was awarded the win in a photo finish that showed he made a decisive lean into the finish. This is the fourth win for the Australian. Third place went to Marcel Hug of Switzerland who crossed the line in 1:40:43.

“I love New York,” Fearnley said afterward his narrow win. “It’s the toughest course in the world. To win here is something special. The crowd the whole way is fantastic. It’s a big deal to be here. It’s amazing.”

The women’s wheelchair division was not as close, but just as exciting. The eventual winner, returning champion Edith Hunkeler of Switzerland, carried out a tactical race by deciding not to take the lead until the 30K mark. Until then, she hung back from the leader, the American Amanda McGrory, who looked to be in a strong position to win until the 20K mark. But after Hunkeler took charge, the pack decided not to let her go so easily. It wasn’t until the final two kilometers, that the 37-year-old defending champion was able to make the final move, pushing herself in front of her followers. Hunkeler crossed the line in 1:58:15. Seven second behind her was the English competitor, Shelly Woods. Third place went to Wakako Tscuchida of Japan who clocked 1:58:23.

Another highlight of the race, Joan Benoit Samuelson, the first gold medalist in the women’s Olympic marathon in 1984 clocked a 2:49:09, which broke the record in the women’s 50-plus divison in the NYC Marathon. An amazing fact: Joan has never run over 3:00 in nearly 30 years of marathoning!

Elite participants aside, a total of 43,000 runners took part in the race—a new record for the event. The streets of New York City were lined by two million cheering spectators while 315 million people followed the coverage of the largest marathon in the world on TV.