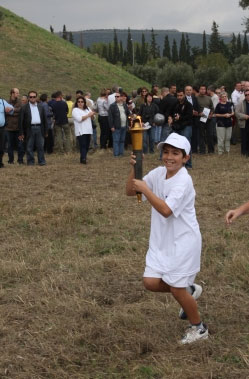 What better place than Marathon, Greece for marathon organizers from around the world to match minds?

On the first weekend in November, that’s exactly what happened in the birthplace of the classic race, when the Greek village hosted the first Marathon Symposium of the Association of International Marathons and Road Races (AIMS). Held on the day before the Athens Classic Marathon, the topic of the symposium was “Marathon: Past—Present—Future.” AIMS cooperated with the International Association of Athletics Federations (IAAF), the Athens Marathon, the Greek athletics federation SEGAS and the city of Marathon to stage the symposium, which will now be an annual event.

The symposium occurred almost 2,500 years after the marathon’s founding legend. In 490 B.C., the Greeks won a major battle against the Persians at Marathon, some 40 kilometers away from the center of Athens. It is said that Pheidippides then ran to Athens to bring the good news of victory. After running the distance and announcing the victory he collapsed and died. When the first Olympics of the modern era took place in Athens in 1896, the marathon was included in the track and field program. Greek’s Spiridon Louis became a national hero after winning the gold medal in an event that at the time measured about 40 kilometers. When the Olympics returned to Athens in 2004—this time, of course, over a distance of 26.2 miles—the same route was used for the marathon. In addition the Athens Classic Marathon is organized annually on this course, leading from Marathon to the old Olympic Stadium in Athens (Panathinaikon Stadium).

The day in Marathon started with an impressive ceremony at the Marathon Tomb. “It is the aim of the marathon to bring together people from all over the world to a festival of sport and fair play,” said Michalis Liapis, Greek’s cultural minister. Aris Spiliotopoulos, the Greek minister of tourism, added, “A marathon symbolizes a peaceful gathering of people from all countries.”

Pierre Weiss, the IAAF’s general secretary, explained that there could not have been a better venue for the symposium, especially in connection with the marathon on Sunday. “This is the birthplace of sport and of the Olympic Games. So the IAAF happily took the patronage for the AIMS symposium. Without the work of AIMS in the past 25 years, the marathon would not be what it is today,” said Weiss, who announced that the IAAF will further support the sport of road running in the future: “Maybe we have missed a train in the past, but now we are catching up.” Weiss and Sean Wallace-Jones, the coordinator of IAAF’s Road Running Committee, explained the introduction of IAAF Labels for Road Races. “There will be Gold and Silver Labels to recognize and reward the world’s leading road race. The standards we set are high ones,” said Wallace-Jones. In addition, the global federation will start a weekly TV magazine, “The Running Road Show,” to give the sport more vital television coverage.

Hugh Jones, former world class marathon runner and today’s general secretary of AIMS, spoke about the tremendous development of marathon running in the past 30 years. “In 1978 I ran my first marathon at Land’s End in Britain,” he remembered. “The finish happened to be 42 kilometers down the main road, and we had to run with ongoing traffic. Three years later I ran at the English championships on country lanes. And the only spectators we had were cows! In the same year the first London Marathon took place, and I had the idea of going to Tower Bridge to watch the runners. I thought it would be a good spot, but when I arrived there the bridge was full of people. That was when I got an impression of the coming dimensions of marathon running.” Jones also noted the enormous recent popularity of road racing in Asia and Africa. Including entrants in all events, the Hong Kong Marathon had 40,000 participants, while races in Beijing, Xiamen and Mumbai all had fields of more than 20,000.

With numbers like the above, it’s not surprising that a main topic of the symposium was the economic impact big road races have today. “Analyzing a marathon race in terms of economy, one has to come to the conclusion that these races are highly attractive,” said Wolfgang Maennig, a professor in economy science at the University of Hamburg who has done relevant surveys in this field. “Already back in 1998 in Berlin, we found out that the economic impact of the race for the city was 25 million Euros. Today’s figures are much higher. Boston in 2003 is said to have had an impact of $74 million, while the figure for this Sunday’s New York City Marathon is $220 million.”

As for popularity, Maennig, an Olympic rowing champion in 1988, noted: “Concerning the number of ticket sales, the Olympics are the biggest event. Looking at it from the side of TV, the Olympics or the soccer World Cup would be number one. But I prefer to see it from the athletes’ side. If you count the number of athletes involved in an event, then the road races are the biggest sports events in the world.”
“The marathon is the only event that was developed from a legend,” said Paco Borao, race director of the Valencia Marathon and vice president of AIMS. Regarding the development of AIMS, he said, “When we started in 1982, we had 28 member races. Today we have close to 250.”

Horst Milde, the man who developed the Berlin Marathon and chaired the AIMS symposium in Marathon, said, “An important aspect for our future development is to motivate young people to start running. Races must think about this and include children’s competitions.”

Timothy Kilduff from the Boston Marathon stressed that race organizers should also think about “media coverage, especially TV, the internet and charity running. But whatever you do, you always have to be respectful to the runners.”

“Today, the marathon is so significant. It is a way of life,” said the mayor of Marathon, Spiros Zagaris, the key figure behind the opening of a new marathon museum in his town. The delegation had lunch in this museum.

Among those invited for the marathon weekend were former world champions Abel Anton (1997 and 1999) and Rosa Mota (1987), who also became the Olympic champion in 1988.

“Marathon has given me a lot in my life,” said Anton. “And I will never forget winning my first gold medal at the World Championships, because it was in 1997, when I took the race from Marathon to Athens.” Appropriately enough, Anton returned to the site of his first major title, running the 10K held in conjunction with the Athens Classic Marathon. In between recreational runners, Abel Anton crossed the finish line in the famous Panathinaikon Stadium, where he had triumphed ten years ago.