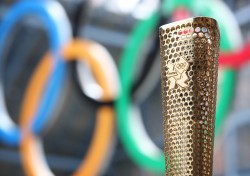 The Olympics will be held in the British capital for the third time. © London 2012

The Marathon—born in Greece—has longstanding roots in London, and the British capital is hosting the Olympics for the third time. The Games were held previously there in 1908 and 1948. On August 5, the women’s marathon gets under way, while the men’s 26.2-mile race takes place a week later. Both competitions will most likely provide some of the Olympic Games’ high points. It was in London back in 1908 that the race first covered the now-classic distance, and since then an astounding 15 world-best times, recognized by the International Athletics Federation (IAAF), have been set. For decades, the Polytechnic Marathon, which was held in the western part of the capital, set international standards. Today its place has been taken by the London Marathon, one of the largest races in the world attracting thousands of runners each year.

London becomes the first city in the history of the Games to host the Olympics more than twice. In the first edition of the modern Olympic Games, which dates back to Athens in 1896, the marathon did not have a fixed distance and consisted of approximately 40 kilometers. It was not until London in 1908 that the race became 42.195 km, or 26.2 miles. This distance was decided primarily as a courtesy to the British Royal Family. Until then, the course had been measured from the entrance to the Olympic Stadium back to the start in Eton, which was 40 kilometers. However, it was decided to change the start line to the front of the east terrace of Windsor Castle so that the King and Queen could watch in comfort. This extra distance from Eton to Windsor Castle meant that the course was extended by at least another mile.

But that was not quite the end of the story. 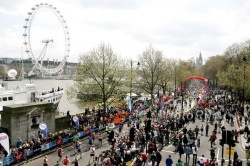 Like the London Marathon, the Olympic Marathon will run along the River Thames. © www.PhotoRun.net

Organizers realized that an additional adjustment was needed in the Olympic Stadium—the finish had to be in front of the Royal Box. Therefore another 195 meters were added, and so the marathon became what it is today: 42.195 kilometers or 26 miles, 385 yards. Yet the 1908 London Marathon did not immediately set the international standard. The International Olympic Committee (IOC) initially decided in 1914 that the marathon distance should be exactly 42 kilometers. The issue was again debated after the 1920 Amsterdam Games that featured a 42.75-kilometer-long course. It was not until 1921 that the IAAF finally decided that the distance should be the one that has since tested millions of marathoners around the world.

However the controversy still lingers. According to John Bryant’s book, The Marathon Makers, John Disley, the British 3,000-meter steeplechase Olympic bronze medalist in 1952 and co-founder of the London Marathon, took his own measurements—and believes that the relocated 1908 course was 174 yards too short.

At this year’s Olympics, the marathon ends not in front of the Royal Box but along the Mall, between Buckingham Palace and Trafalgar Square. “The royals aren’t what they used to be,” David Wallechinsky, the president of the International Society of Olympic Historians, told The New York Times. “I doubt they’ll change the marathon or fencing to please Prince Harry.”

The 1908 Olympics: Drama Just Before the Finish

The 1908 Olympic Marathon in London is also remembered for a dramatic turn of events. Approximately 75,000 spectators awaited the finishers at the White City Stadium in Shepherd’s Bush, in West London—and what they witnessed is now part of Olympic running history.

Dorando Pietri, an Italian baker, led for much of the race, which was run in warm temperatures of about 77 degrees Fahrenheit. Still in the lead, but completely exhausted when he entered the stadium, he took a wrong turn. After he had been shown the correct way, Dorando collapsed, pulled himself to his feet again and staggered towards the finish line. The Italian fell five times in all, and when the runner in second-place, American John Hayes, came into the stadium officials could not bear to watch Dorando’s suffering any longer. They helped him across the finish line, which meant that after a protest from the U.S. delegation he was disqualified. Ironically, if the course had not been extended by 213 yards so it reached the Royal Box, Dorando Pietri might very well have won. But it was not to be, and John Hayes took the gold medal with a time of 2:55:18.4—a result that was later recognized as the marathon’s first world’s-best. (The IAAF only introduced official world records in 2003.)

The 1948 Olympics: A Race Decided by a Matter of Meters

Fast forward forty years… and an equally thrilling Olympic Marathon finish took place in London. The race began and ended in Wembley Stadium with the course running through the northern part of the city. Belgium’s Etienne Gailly took an early lead and was 41 seconds ahead after 15.5 miles. But it was his first marathon, and at that point he began to slow. Etienne was caught about 6 miles from the finish—but rallied to overtake the leader, Delfo Cabrera of Argentina, 800 meters before reaching the stadium.

But sadly, the plucky Belgian had run out of gas. As he entered Wembley Stadium, according to The Complete Book of the Summer Olympics, Etienne could barely move his legs. Spectators were reminded of Dorando Pietri’s finish in 1908 as two runners overtook him on the track. Delfo Cabrera, also making his marathon debut, became the Olympic champion in 2:34:51, and Tom Richards of Great Britain placed second with 2:35:07. Unlike Dorando Pietri, Etienne Gailly managed to stay on his feet and finished a brave third in 2:35:33.6.

From the Polytechnic to the London Marathon 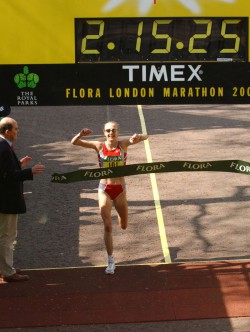 Paula Radcliffe won the 2003 London Marathon in what is still the world record of 2:15:25. © www.PhotoRun.net

On October 3, 1926, Violet Percy ran the course solo in 3:40:22. Although women’s long-distance events were not then part of the Olympic program her performance was the first to be ranked by the IAAF as a women’s marathon world-best time.

In 1938 the finish was moved to the Polytechnic Harriers’ new stadium in Chiswick, a West London suburb. Spectators there witnessed six world records between 1952 and 1965, with the Briton Jim Peters setting three world bests in succession. In 1953, he became the first marathoner to go under 2:20 (2:18:40). In 1965, Japan’s Morio Shigematsu won in 2:12:00—the eighth and last time a world-best was set in the Polytechnic Marathon’s history. No other race boasts more world-best times.

But by 1970, traffic problems were making it increasingly difficult for the Polytechnic Marathon’s organizers. Ian Ridpath, the race’s last director, wrote in a history of the event that they were unable to rival the burgeoning city races, which were starting to offer top athletes large sums of appearance and prize money—and the 78th edition of the Polytechnic Marathon in 1996 was its last.

The London Marathon had by then become one of the world’s leading and most popular road races. It debuted on March 29, 1981, with more than 20,000 runners applying to run and an eventual field of 7,747 runners. Since then, the London Marathon has grown to have more than 35,000 starters and finishers. More than 170,000 runners applied for bib numbers at the most-recent event in April, with a lottery being required to decide who would take part.

The charity-running aspect of the famed London race has also become an amazing success story. Since 1981, London Marathon runners have raised approximately 858 million US-Dollars for charitable causes! The event is now broadcast in more than 150 countries throughout the world, and more than six million television viewers watch it live in Britain alone. And approximately one million spectators gather every year along the course, which begins in Greenwich and finishes at Buckingham Palace.

From an elite-running perspective, London is one of the best. Four world records have been set in the event’s history. On April 13, 2003, England’s own Paula Radcliffe, ran 2:15:25—an incredibly fast time, which remains a women’s record unmatched to this day.

Running fans across the world now have their eyes on London—eagerly awaiting the drama that inevitably accompanies both the men’s and women’s marathons.