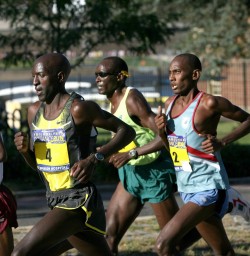 On any given day on the dirt roads that surround Boulder, Colorado, you may come across a long line of sleek Africans running at a pace that some bicyclists can’t maintain.

These hard-working individuals are very special runners—some of the fastest humans in the world, in fact. They are proud members of the KIMbia team.

In 2004, Dieter Hogen and Tom Ratcliffe founded this team with the twofold goal of coaching some of the world’s best runners while using its position in the world of athletics to support education in Kenya. In Swahili, “Kimbia” means “to run.” Hogen and Ratcliffe selected this name both as an acknowledgement of the impact Kenyan runners have had on international athletics, as well as a touching way to honor the legacy of the late Kim McDonald, one of the world’s finest athletic managers, who passed away in 2001.

The KIMbia team is comprised of a total of 40 men and women who are split into two groups: the marathon group and the road racing group. Now that the major spring marathons have concluded, the focus has turned to KIMbia’s road racing squad which has been training for four of the largest American road races: Lilac Bloomsday Run, Bay to Breakers 12K, Bolder-Boulder, and the Peachtree Road Race.

Last weekend in Spokane, Washington at the Lilac Bloomsday 12K, members of the KIMbia team led the way. Finishing first out of an estimated 50,000 runners was John Yuda of Tanzania who covered the distance in 35:26 minutes. In the women’s race, Lineth Chepkurui of Kenya, who won the race last year, broke the tape in 38:37, and set a new course record along the way. 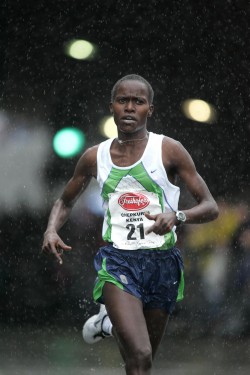 Lineth Chepkurui hopes to finish ahead of the men on Sunday. © www.photorun.net

Both Yuda and Chepkurui are living examples of runners who have overcome incredible obstacles in their careers. Last year Chepkurui suffered a back injury while serving her mandatory time in the Kenyan armed forces, yet despite the pain she continued to run. Taking part in basic training, she had to don a 20-pound rucksack and march for 20 miles. As someone who normally runs 70 minutes for a half-marathon, walking 20 miles may not seem that difficult, but Chepkurui only weighs 90 pounds and her frame couldn’t take the additional poundage. “She ran with pain all year. She is very tough and continued to win despite her injury,” her coach Dieter Hogen recalls.

John Yuda has also dealt courageously with injury. In 2003, he was nearly killed in an auto accident during the Christmas holidays. Luckily, he escaped relatively unscathed and went on to run the 2004 London Marathon. In that race, his debut marathon, Yuda looked as if he was going to win it. Through 35 kilometers he was in the front, sharing the lead with Evans Rutto and Sammy Korir and running strong. But then things suddenly fell apart. Slipping on an uneven section of the pavement, Yuda fell, pulling his hamstring. Korir and Rutto took off while Yuda grimaced in pain. At that point, most runners would have dropped out of the race, but not Yuda. With gutsy determination he got back up and continued to run, and crossed the finish line in tenth place with a time of 2:10:13 hours—an amazing debut considering his injury.

Both John Yuda and Lineth Chepkurui now set their sights on the Bay to Breakers 12K race in San Francisco this weekend. Started in 1912, the Bay to Breakers is the longest consecutive running race in the world. It’s a large race too with between 70,000-80,000 runners. Oddly enough, John and Lineth will have an opportunity to race each other. Using an equalizer start, the elite women’s field will begin the race ahead of the men based on the average difference between each division’s course records: 4:40. The first person to cross the line wins. Dieter Hogen notes the unique dynamic that happens with this kind of race. “The men have a big interest in catching the women while the women don’t want to go out too fast in the beginning. This adds significant mental stress to the athlete. You have to time yourself and ensure you have enough energy for the second half of the course where the big hills are. It’s very interesting.” 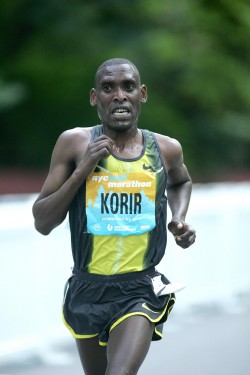 Last year’s champion at the Bay to Breakers 12K, John Korir, will give it his all this weekend. © www.photorun.net

Chepkurui and Yuda aren’t the only top-seeded KIMbia athletes running the Bay to Breakers. In the men’s division, last year’s winner, John Kipsang Korir of Kenya will toe the line. Korir is a road-racing ace who won Bay to Breakers the last two years. He’s also won the Lilac Bloomsday Run three times and the Cherry Blossom 10-mile race in Washington D.C. twice. Korir is definitely the pre-race favorite. Additionally, the former winner of Lilac Bloomsday (2006), Gilbert Okari, joins the men’s contingent. In the women’s race, Chepkurui may be joined by a recent addition to the KIMbia team, Janine Gakunyi. Gakunyi has been waitlisted and has a good chance to race. She joined the KIMbia team this year, coming from a company team in Japan. According to Dieter Hogen, Gakunyi wants to start a running career in America and is racing on the roads to prepare for the marathon.

How will these athletes run on Sunday? Who will cross the line first? Will it be a man or a woman? Will the KIMbia team continue its impressive winning streak? Take The Magic Step will provide updates on these hard-working athletes’ significant race accomplishments in our Running Stories section. Stay tuned. The excitement has just begun!