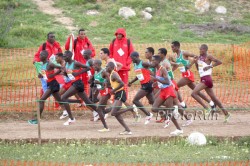 Kenya’s stars were right up front at the World Cross-Country Championships. © www.photorun.net

Kenya’s athletes dictated the outcome of events at the World Cross-Country Championships in Bydgoszcz in Poland, winning all four individual gold medals and the team titles. The greatest of the triumphs was Joseph Ebuya’s win in the 12-kilometer race—a feat not accomplished by a Kenyan since Paul Tergat’s victory 11 years ago. Emily Chebet won the women’s 8K race. The Kenyan juniors Caleb Ndiku and Mercy Cherono completed their triumphant sweep of titles with wins in the 8K and 6K events respectively. The weather turned out better than expected: dry, cool and sunny. This meant the athletes were spared the anticipated run through the mud.

On the fourth of six laps in the men’s race, Teklemariam Medhin (Eritrea) picked up the pace at the front, breaking the leading group apart. Only Joseph Ebuya was able to keep up with him. Going into the final lap the pair had a three second lead over Leonard Komon (Kenya) and were another three seconds ahead of Moses Kipsiro (Uganda). Even after Joseph Ebuya had broken clear over the last 2K, he was still not sure he would win. “When I had a ten meter lead, I began to pray—I thank God that he has given me this victory which I dedicate to my country,” said the 22-year-old, who finished fourth in the World Cross-Country two years ago.

“It was tough just to qualify for the World Cross-Country Championships,” Joseph Ebuya told the IAAF Web site (iaaf.org). “It was very good to be able to train with the Kenyan team at the Kilimanjaro because the cool temperatures were similar to what we experienced in Bydgoszcz.” Ebuya ran 33:00 minutes and following him across the line were Teklemariam Medhin (33:06) and Moses Kipsiro (33:10). Leonard Komon took fourth place with the same time as Kipsiro. The runner thought to be Kenya’s strongest contender, Paul Tanui, settled for eighth place in 33:30.

The defending champion, Gebre Gebremariam, of Ethiopia finished tenth in 33:35 while the best non-African was the Canadian Simon Bairu with 13th place in 33:44. One place behind, was Spain’s European champion, Alemayehu Bezabeth (33:47).

After the first half of the women’s 8K, a group of six had formed at the front. But going into the last lap, the crowd was surprised to find out that the pre-race favorite, Tirunesh Dibaba, had fallen behind. She is a three-time World Cross-Country champion and reigning double Olympic champion. During the race, Tirunesh Dibaba was behind Lineth Chepkurui (Kenya), a member of the KIMbia group, and nine seconds behind the leading trio. Up front, Linet Masai, Emily Chebet, and the Ethiopian, Meselech Melkamu, were vying for the medals. It came down to a thrilling sprint finish between Linet Masai, last year’s world 10,000m champion, and Emily Chebet. However, just as in Amman in Jordan last year where she faced off against compatriot Florence Kiplagat, Linet Masai came off second best. The 24-year-old Emily Chebet won in 24:19, surpassing her previous best performance at a major championship when she placed ninth in the 10,000 meter at the 2007 World Championships. Masai crossed the line one second later. The bronze medal went—for the fifth time in her career at the World Cross-Country Championships—to Meselech Melkamu in 24:26 who finished ahead of her compatriot Tirunesh Dibaba (24:38) and Lineth Chepkurui (24:40). The best European was Hilda Kibet (Netherlands/25:17) in tenth while Shalane Flanagan of the United States finished in an impressive 12th place in 25:20. 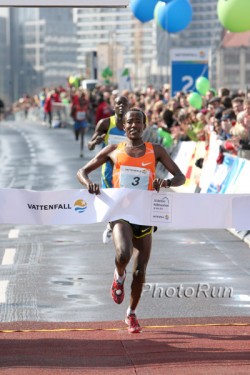 Twenty-eight-year-old Eshetu Wondimu from Ethiopia won the 30th edition of the Vattenfall Berlin Half Marathon in 60:16, just one second ahead of the Kenyan Peter Kirui. Fellow Ethiopian Maregu Zewdie placed third in 60:24. This broke the Kenyan sequence of eight consecutive victories in the biggest half marathon in Germany.

The fastest woman on Sunday was 21-year-old Pasalia Kipkoech. The Kenyan won in 69:43 ahead of her compatriot Eunice Kales (69:50). Pasalia Kipkoech’s impressive run came as no surprise. The Kenyan produced a high quality performance at the beginning of the year to win the legendary São Paulo New Year’s Eve 15K race in Brazil. She had then turned her attentions to preparation for the Berlin race.

Sabrina Mockenhaupt wore the number F1 as defending champion. The 29-year-old runner from the Cologne Marathon club had won all of her previous five races in Berlin. She had taken the title at the Women’s Run three times and last year both the Half Marathon and 10K City-Night race. Sabrina Mockenhaupt finished third on this occasion, crossing the line in 69:57 after battling against some headwind to achieve the fastest time by a German in this year.

23,799 runners took part in the half marathon and taking into account those participating in events held in conjunction, a total of 27,051 athletes from 94 countries were entered as rain and temperatures around 50 degrees Fahrenheit greeted those on the start line with 19,670 making it to the finish. Approximately 170,000 fans gathered along a course, which offered views of Berlin’s distinctive landscape, including the Brandenburg Gate, the Victory Column, the Kaiser Wilhelm Memorial Church, and Potsdamer Platz.

In the men’s race, a leading group of 13 went through 10K in 28:39 minutes—slower than planned, caused in part by the windy conditions and also by the pacemakers falling behind schedule. By the early stages of the race, Eshetu Wondimu was the one making all the moves. The Ethiopian, who had finished runner-up in the Berlin Half Marathon two years ago by just one second, eventually broke away with his compatriot Maregu Zewdie and Kenya’s Peter Kirui. The race was still open until the finishing straight when Eshetu Wondimu sprinted clear to win by one second.

Not only in Berlin two years ago but also as recently as in The Hague, Netherlands two weeks ago where he ran a personal best of 59:52, Eshetu Wondimu had lost a race by just one second. On both occasions, the winner was Patrick Makau Musyoki but the Kenyan was not running on Sunday. In response to the question, if he feared he would lose again in a sprint finish as the he and the other two leading runners headed for the line, Wondimu replied, “Patrick has beaten me twice but he is a very strong runner. I knew that one day I would win so today I was confident.” In Dubai in January, Wondimu had improved his marathon best to 2:06:46 hours.

“When I saw that the weather wasn’t so good this morning, I knew it would be tough to run under the hour. But I was sure that I would run well because I like Berlin and the race a lot. So I’d love to come back and run the Berlin Marathon on September 26,” said Eshetu Wondimu. Coming in behind the winner were a further four runners inside 61 minutes. 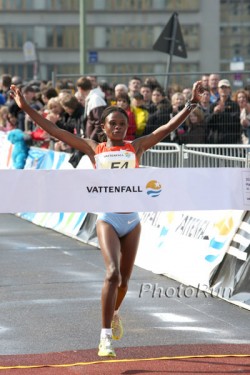 Pasalia Kipkoech was the fastest woman in Berlin. © www.photorun.net

Early on in women’s race, Pasalia Kipkoech and Eunice Kales went clear of their rivals and when the Kenyan duo reached 10K in 32:55, they had an 11-second lead over Sabrina Mockenhaupt. With 2K remaining, Mockenhaupt had narrowed the gap to three seconds and almost caught up with Kales who was lagging behind Kipkoech. But the Kenyan women saw Sabrina Mockenhaupt coming and were able to push the pace further. “I wasn’t sure I would win—I prayed that I would win. Originally I thought that I would have to run 67 minutes to win,” explained Pasalia Kipkoech.

“I knew early on in the race that I wouldn’t be running a personal best,” said Sabrina Mockenhaupt afterwards. “I would have loved to have won but in the end both of the Kenyan runners were simply too strong for me. I lacked competitive steel and stamina.”

“I had hoped to run better but training for two-and-a-half-months is just not enough. But I have to be happy with what I achieved and now know at least where I stand,” Sabrina Mockenhaupt said. She is a member of the German armed forces sports unit and had to take a sergants training course in November and December.” We had to be up at six every day, marching in the forest with bag packs and doing shooting practice—after all that I was just too tired to train properly,” she explained.

Sabrina Mockenhaupt will now concentrate on the 10,000m, aiming to finish in the top eight at the European Championships in Barcelona this summer. Afterwards, she plans to run an autumn marathon. The 29-year-old also wants to concentrate more on road races in future.