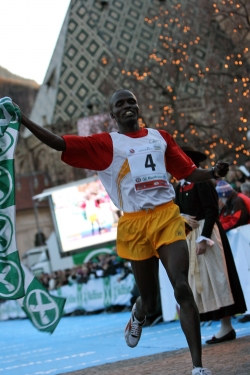 With Kenyans once again dominating the road running scene in 2007, it was only fitting that the year finished for them in the same style. Athletes from the top running nation in the world celebrated a double win at the highly rated New Year’s Eve race in Bolzano: first Sylvia Kibet won the 5K in 16:01, and then Edwin Cheruiyot Soi took the men’s 10K in 28:50.

Thousands of spectators around the tight 1.25K lap through the streets of Bolzano’s old town ensured a supportive atmosphere. The men had to do eight laps, and at halfway there was a sprint bonus for the leader. Soi, only 21 years old, managed to win this extra prize after Demma Daba Bikila miscounted the laps; the Ethiopian set off for what he thought was the sprint victory after three laps. Soi and the Ethiopian Fedaku Habtamu Awash had already gone clear of the high-class field before halfway, a field that included Sergey Lebid of Ukraine, winner of a record five victories in Bolzano, and the World half marathon runner-up Mubarak Shami of Qatar.

After that, Awash had no chance against the long kick for home by Soi, as the young Kenyan had shown tremendous finishing speed several times in 2007, including in his double wins in the 3,000m and 5,000m in the World Athletics Final in September. Paul Kimaiyo (Kenya/29:04) and then Lebid (29:08) finished behind the Ethiopian Awash (28:54).

The women’s race was decided in the last 300 meters when the 23-year-old Kibet broke free of her rivals. The fourth-place finisher in the World Championship 5,000m crossed the line on the Walterplatz in 16:01 over Etea Emebet Bedada (Ethiopia/16:05) and last year’s winner, Aniko Kalovics (Hungary/16:08). The course record – held on the women’s side by the Berliner Kathrin Wessel with 15:34 in 1991 – was not under threat. A Kenyan double win in Bolzano is, in contrast to many other races, something of an exception: the last time this was achieved was in 1998, by Daniel Komen and Tegla Loroupe.

The Sao Paolo race in Sao Silvestre, Brazil is the New Year’s Eve race above all others. At the 83rd edition of this classic over 15K, Kenyans celebrated a double success in very hot conditions, as the temperature reached 90 degrees.

By 7K, Robert Cheruiyot, who became the first winner of the World Marathon Majors in 2007 and won the Boston Marathon in April, had already gone clear of his rivals, who included another world-class marathon runner, Patrick Ivuti. The 29-year-old Cheruiyot steadily increased his lead and his finishing time of 45:57 was almost a minute in front of Ivuti (46:52). Third was the Brazilian Anoe dos Santos Dias in 47:06, and fourth was Jacinto Lopez of Columbia in 47:23.

In the women’s race, the 24-year-old Alice Timbilil defied her rivals to claim first place. The Kenyan, who took the silver medal in the 2005 World Cross Country Championships, went into the lead at around 5K and finished in 53:07. That gave her almost half-a-minute’s lead over the Brazilian Marizete de Paula Resende (53:36). Third was her compatriot Maria Zeferina Baldaia in 54:43.

The race in Madrid is one of the top European New Year’s Eve events. A British woman narrowly missed springing a surprise in the 10K. Kenyan Vivian Cheruiyot had to resist the attacks of Kate Reed all the way to the finish line. Cheruiyot – world silver medalist over 5,000m in Osaka in 2007 – won in a speedy 31:50, 2 seconds ahead of the runner from England, who finished sixth in the European Cross Country Championships in December. Third was the European cross country champion Marta Dominguez of Spain, who was well back in 32:27.

A Kenyan was also prominent in the men’s race: Kiprono Menjo won in 28:35, but was well off the course record of the previous year. Menjo was 3 seconds ahead of Alemayehu Bezabeh of Ethiopia at the finish. Third was the Spaniard Chema Martinez in 28:41.

Fifth win for Prokupcuka in Portugal

Jelena Prokupcuka won the New Year’s Eve race in Amadora, Portugal. Twice a winner of the New York City Marathon, the Latvian completed the 10K in 33:16 and relegated Ana Dias to second place (33:34). The Portuguese’s finishing position tells a sad story, as this was the sixth time she’s finished second in the race. Kenya led the men in Amadora: Moses Masai won in 28:25 over his compatriot Barnabas Kosgei (28:43). The Portuguese Leao Carvalho was third in 29:07.

Kipsiro and Mockenhaupt Win in Trier

New Year’s Eve is the busiest day of the year on the German road race calendar, with about 100 events held on Monday. While the biggest one – a 15K event from the town of Werl to neighboring Soest, with 7,800 participants – is a mass race only, the best-quality event traditionally takes place in Trier. The 18th edition of the New Year’s Eve race was won by Moses Kipsiro (Uganda) and Sabrina Mockenhaupt (Germany).

Kipsiro took the so-called “German Sao Paulo” in Trier in style. The 5,000m bronze medalist from Osaka was well in the lead before halfway. He finished the 8K course in 22:31, missing the course record by just 10 seconds. The battle for second and third spots was much closer. In fact, second through sixth places were separated by just 7 seconds. Wilson Chemweno (Kenya) came in second in 23:01, while Sander Schutgens (Netherlands/23:03) took third. Arne Gabius, who is coached by Dieter Baumann, was the best German in sixth place with 23:08.

Spectators along the one-kilometer loop course in the city center of Trier had plenty to cheer for in the women’s race. In this 5K event, Susanne Hahn first took the lead. Then Mockenhaupt increased the pace well before halfway and left her rivals behind. “I felt my feet were a bit cold, so I decided to run faster to become warmer,” Mockenhaupt said. Clocking 16:01, the 27-year-old was 23 seconds ahead of Hahn. Another German, Antje Möldner, took third with 16:31, while European marathon champion Ulrike Maisch was sixth in 16:50. Irina Mikitenko had to cancel her start due to an inflammation of the middle ear.

It was the other way round in Bietigheim, where the German men took the honors. Sebastian Hallmann was the fastest of 4,250 runners on New Year’s Eve. He clocked 33:03 for the 11.2K distance to beat steeplechaser Filmon Ghirmai (33:09) and Martin Beckmann (33:10). While Kenyan opposition was too weak to have an impact in the men’s race, things were different in the women’s event. Here, Kenya’s Milka Jerotich was well ahead, winning in 37:19. Marathon specialist Melanie Kraus, who won the Frankfurt Marathon in October, clocked 37:43 for second. Former Eritrean Simret Restle, who now has German citizenship, was third in 38:28. Luminita Zaituc had to withdraw from the race because of a cold.