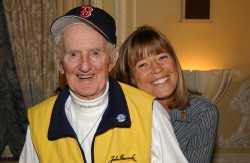 Uta and Johnny Kelley in Boston during the 2004 marathon weekend. © BAA

Johnny Kelley was the legend of the Boston Marathon. 61 times he had run the classical race from Hopkinton to Boston, winning it twice in 1935 and 1945. No other runner came ever close to so many Boston Marathon races. On 8th October Johnny Kelley died aged 97. He lived near Boston.

Born in 1907 Kelley first wanted to become a baseball player. But when he was ten years old and had just started playing the game a ball hit him right into the face. That made him change the sport. And in running Johnny Kelley was to be much more successful. He was 13 years old when he watched the finish of the Boston Marathon for the first time. It was in 1921 when the winner Frank Zuna impressed little Johnny. Zuna looked very much relaxed when he finished after these 42,195K. That was a decisive moment for Johnny Kelley and his future commitment to the Boston Marathon.

“Running is a way of life for me, just like brushing your teeth,” Johnny Kelley once said. “If I don’t run for a few days, I feel as if something has been stolen.”

Johnny Kelley grew up being one of ten children. He first worked as a plumber and later as an electrician. He could only train after work, and often it was dark. Nonetheless he became very successful although when he ran his first Boston Marathon in 1928 he did not reach the finish. But seven years later he was back winning. As a 27 year old he ran 2:32:07. Ten years later he repeated this feat. This time he won the Boston Marathon in 2:30:40. Two years earlier in 1933 he had achieved his fastest time of 2:30:00 and placed second. It was seven times that he finished second in Boston and he has a record of 18 top ten performances in this race. In the Berlin Olympics in 1936 Johnny Kelley finished 18th in the marathon. Twelve years later he was again a member of the US Olympic Team. In London in 1948 he finished the marathon in 21st position being already 40 years old.