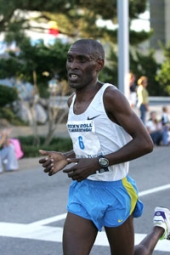 John Korir has been named ‘Road Runner of the Year’ by the US magazine ‘Running Times.’ Very close behind in the ranking follows another KIMbia runner: Gilbert Okari placed second. ‘Running Times’ has a readership of nearly 400,000 in the US.

29-year-old John Korir had started a series of five wins in a row at the end of February. He won the World’s Best 10K in Puerto Rico. Korir then continued to show impressive form at the 10 mile Cherry Blossom in Washington (April) and the Lilac Bloomsday 12-kilometer race in Spokane (Washington) in the beginning of May. Despite being misdirected John Korir won the Medio Maraton de Coban later in May. In difficult conditions with hot and humid weather at an altitude of nearly 1,400 meters he ran 63:45 minutes. His fifth win in a row came at the 10K Bellin Run in June.

John Korir remained unbeaten for the first six months of the year, but then he was unlucky. Having won the Cherry Blossom and the Bloomsday races he was heading for a special triple in US road running. If he would have been able to win the Peachtree 10K race in Atlanta in July he would have been the first runner ever to collect a $ 15,000 bonus for the triple. But after training in Kenya his US visa was delayed and he was unable to travel to Atlanta.

It was Gilbert Okari, who then stepped in and won Peachtree. He continued to show impressive form for two months, winning six races in a row: Following Peachtree the 27-year-old was number one at the Utica Boilermaker (15K), Bix 7 Miles, Beach to Beacon (10K), Falmouth (7 miles) and Abraham Rosa 10K.